For Ellipsis Monday Photo Shoot #26: Hit Me With Your Best Shot!, Carly is looking for our best photo within our particular photographic specialty. I suppose there are two areas I tend to specialize in, which sometimes overlap. I love to photograph Tucson and Arizona generally, which usually means landscapes, and specifically sunsets or desert or dramatic weather, or some combination thereof. And I love to photograph dogs and other critters. Sometimes I get lucky with a dog or wildlife photo, but I there's little question that I'm better on landscapes. I don't have a fabulous camera or a ton of patience for tweaking camera settings or waiting for the perfect shot, so I compensate by taking a lot of pictures and hoping one or two will be good ones. The advantage of a landscape is that my subject isn't going to fly or run away. 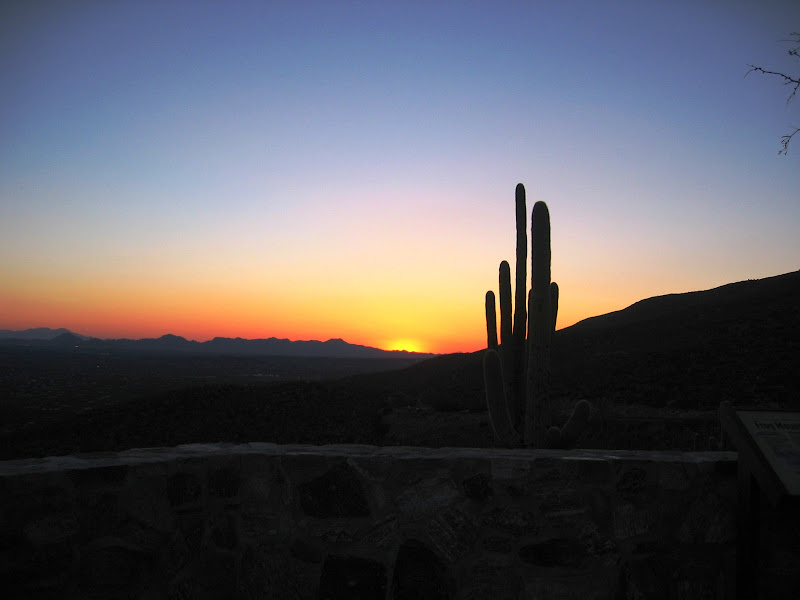 A little way up Mount Lemmon, Mar 15, 2005. Canon PowerShot S410.
On the other hand, sunsets require the right venue and good timing, and I do make the effort sometimes because the rewards can be pretty great. When I first got my digital Canon in 2005, I was forever driving toward the mountains after work, trying to get the kind of Tucson sunset one finds on calendars and postcards, with a nice saguaro and maybe some mountains. Ask me tomorrow and I may show you the blue one or the orange one instead, or the one with the lovers at Gates Pass; but tonight the one shown above is my favorite sunset photo of that era.

Above is a photo of probably the most dramatic sunset I've ever seen. The venue was fairly ordinary - the parking lot of Safeway Plaza at Wilmot and Golf Links, in front of Subway. I was on the other side of town that day as the sun went down, and could see it was probably going to be an especially good sunset because of the clouds. I raced to Safeway Plaza because across the street was an empty lot with trees and mountains to add interest, and no buildings to get in the way. As it happens, I'm in a mood tonight to criticize the actual photo. I don't like the way the trees look. But there's no denying that the sunset itself that evening was fabulous. It was so impressive that the departing curate at St. Michael's, Rev. Angela Emerson, mentioned that same sunset at some length in her final sermon for us. I sent her a copy of this photo as part of a going away gift. 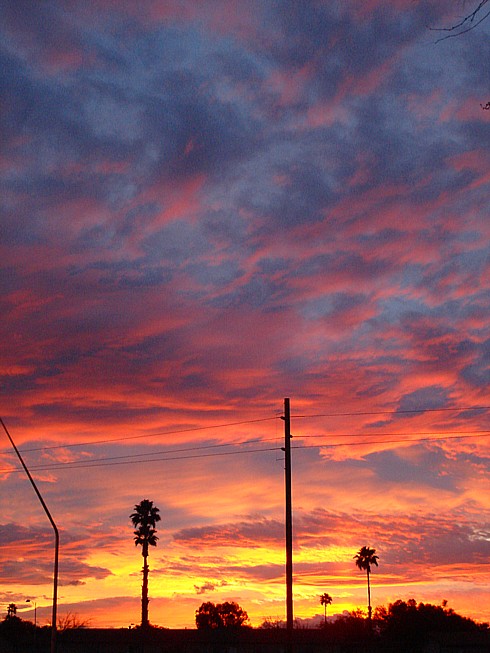 Here's another shot of the same sunset. I've never quite figured out which version I prefer.

Recently I've taken most of my sunset photos at the dog park, which isn't an ideal venue. The trees block most of the view, and the dogs in the foreground are dark against a dark background. But I have managed a few rather good ones, of which this is my favorite: 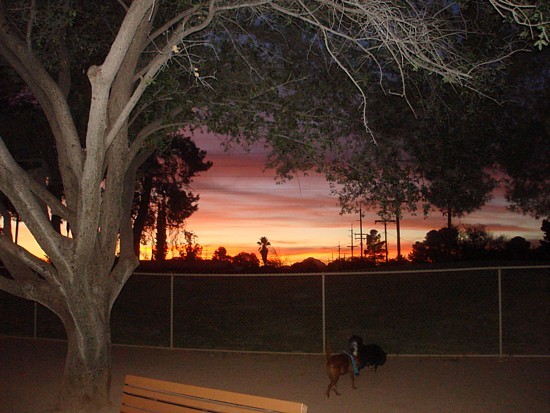 Miko's Corner Playground, Nov 12, 2008. Same SONY camera.
Tonight I thought I'd wrap up this sunset showcase with a new sunset photo. So after the dog park I rushed over to Safeway Plaza. What a shock! I guess I haven't taken too many photos there recently, because I hadn't realized that they've finished building base housing where my beautiful empty lot was. There's still a small area that's relatively unscathed, but the possibilities for framing a good sunset are decidedly limited now. I'll spare you the photographic evidence of Subway adding insult to injury by stringing a banner to block my sunset with little flags advertising $5 subs, and show you the best that was still possible tonight: 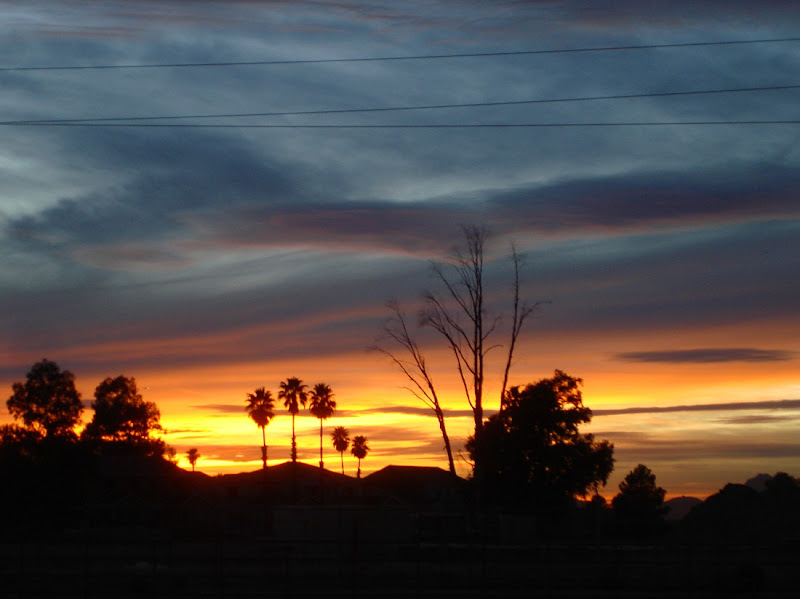 Be sure to check Carly's blog Ellipsis every week for the Ellipsis Monday Photo Shoot, with links to the previous week's participants. (Which reminds me; I've got to make my rounds!) Before I sign off, though, I notice that Carly asked us a question this week, about what our first camera was, and wether we still have it. Mine was a cheap plastic no-name flash camera, which we bought Dad for Father's Day circa 1965. Later we got him a Kodak Instamatic for Christmas, and I got the old one as a hand-me-down. At some point Dad got a decent 35mm SLR, and I got the Instamatic. Next step up was a Poloroid OneStep circa 1976. My brother Steve gave us his old Canon AE1 as a wedding present, I think, which I used until it was stolen out of the van in late 1986. Then it was the Chinon, which I dropped and dented(!). Our first digital was a SONY Mavica, which stores photos on floppy disks! That one we still have.

Email ThisBlogThis!Share to TwitterShare to FacebookShare to Pinterest
Labels: http://www.blogger.com/img/blank.gif

I love the first one. I'd crop the foreground a bit to bring the horizon closer to the 1/3 point of the picture rather halfway. Google "rule of thirds." Actually, you could use the same proportion idea to crop out the road sign in the second one as well.

Very nice and dramatic sunsets! I love them all!

I love the second and the third, the sky looks like it's on fire! so intense.

Your sunsets never disappoint! The first one is just gorgeous, but the colors are so varied and vibrant on the second and third one, it nearly takes one's breath away! Well done.

All are beautiful, but I like the central ray of light in the second sunset photo the best.