Nor surprisingly, considering that I just completed a whole string of lessons about internal control for my online Auditing seminar, I have internal controls and related concepts on the brain tonight. After eight hours of answering questions about segregation of duties, control of assets, matching numbered documents to test completeness, etc., I start to see the whole world in auditing terms, from the monitoring of gold received by my character in Dragon Wars to my own performance in completing the assignment a couple hours late.

Neither an online fantasy game nor the nature, timing and extent of my studying procedures are directly related to what I was studying, and even now the imagined concurrence between them is slipping away. But when you get really immersed in a particular way of looking at things, that perspective tends to map itself on your perception of the rest of the world, however briefly. I remember reading eight or more Doonesbury books in a row once, quite a few years ago now. For an hour or two afterward, my thoughts about the world around me assumed a standard four-panel structure: set-up, punchline, secondary punchline or tag. Similarly, I once stood in the Catalina Theatre parking lot after seeing Field of Dreams for the first time, feeling, however briefly, that the world was shimmering with human altruism and mystical possibility.

From that experience comes a passage in Heirs of Mâvarin that I've quoted from in my sig files for quite a few years now. Crel, who recently learned that she is really Princess Cathma but isn't supposed to tell anyone, obliquely compares that revelation to a more limited alteration of perception:

“I know what you mean,” Li said. “I get that way about books, too. Do you ever get the feeling, right after you read something, that the whole world around you is a little different because of what you read?”

Crel thought about it and nodded. “Like everything that happens right after that means a little more, as if it were part of the story. Yes, I’ve felt that.”

“Then the feeling wears off,” Li said earnestly, “and everything’s just the same.”

Crel looked at him again. She knew just what Li meant. She’d felt it herself, but she had never been able to talk to anyone about it. Not to Del, and certainly not to Jamek.

“Somebody told me a story a few days ago,” Crel said slowly. “It changed the world around me, and I don’t think the effect is ever going to wear off.”

One thing the human brain does is compare new experience to existing data, to identify everything and fit it into one's understanding of the world. This thing Pepper is barking at is a St. Bernard, because it matches my stored image of what that breed of dog looks like. Another dog matches my brain's description of a Great Dane in shape but not in color, which based on my readings about dogs in fifth grade, my brain labels "brindle." And so on. This process is absolutely necessary to our ability to learn and understand and function. A particular example may be entirely appropriate and benign, such a recognition of something as a "table" or "test of controls," or it can be skewed and detrimental, such as a false identification of a person as "lazy" or a "terrorist" based on faulty data or stereotyping.

And it can be wonky in the way that the new data alters the rest of the database, forcing accommodations to make it fit. If we apply critical thinking, we may see that the new information requires us to revise our understanding of something. For example, when I finally took my first formal accounting course after years of learning on the job, there was a definite "everything you know is wrong" aspect to a lot of it. To learn accounting properly, I had to revise my understanding of a number of terms and concepts, and did so. But this isn't necessarily the way everyone deals with new information. Rather than alter one's understanding of, say, a Congressional bill we don't like, based on factual information and expert opinion, we may choose to deny or ignore the data that doesn't fit our established world view, substituting false and illogical claims that allow us to maintain a static understanding, however flawed it may be. Or, as we have seen, the new data can encourage a greater change in perception than is actually justified. The world really isn't a Doonesbury book, a mystical cornfield or a study of internal controls of an organization in the planning phase of an external audit. Most of the time we recognize this, and are only influenced a tiny bit by such data outside the scope to which it applies. But there are times when it has an unwarranted impact. For example, one bad experience during early childhood can result in a lifelong fear of dogs, or a single rejection for a job due to not being bilingual can result in a lasting resentment of the Hispanic labor force. 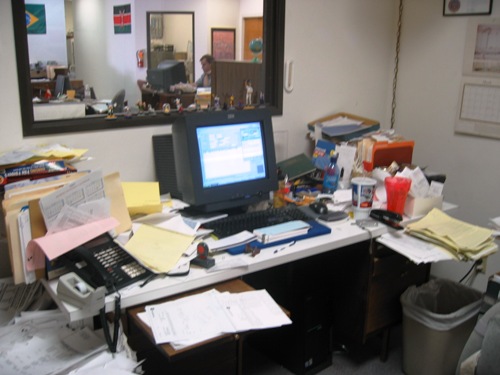 My office at Worldwide Travel at its worst, March 2005.
Separation of duties, for the non-accountants among you, is a subset of internal control, which is basically the system of policies and procedures designed to minimize fraud, error, illegality and inefficiency in an organization. The idea behind separation of duties is that if the same person is in charge of an entire accounting process, such as the authorization, preparation, signing, distribution and recording of a check issued by the company, that person has plenty of opportunity to do something nefarious, or make errors that will go undetected.

In reading all this stuff about separation of duties, I inevitably compare what I'm reading with my personal work experience. The first time I read about this in one of my accounting courses, I compared the standards for separation of duties and other internal control procedures with what happened at Worldwide Travel. Being the entire accounting department, I both prepared and recorded the checks in the general ledger, which is less than ideal. (I didn't sign or mail them, though, so it wasn't horrible internal control.) I also collected the cash and checks from the safe, prepared and recorded the deposits and the components thereof, and often took them to the bank. That's worse than the disbursements thing by far. But this was a small company, and when there are only six people in the office on a given day and five of them are mostly there to sell travel, it isn't practical to conform to the same standards that are appropriate to an organization with hundreds or thousands of employees. 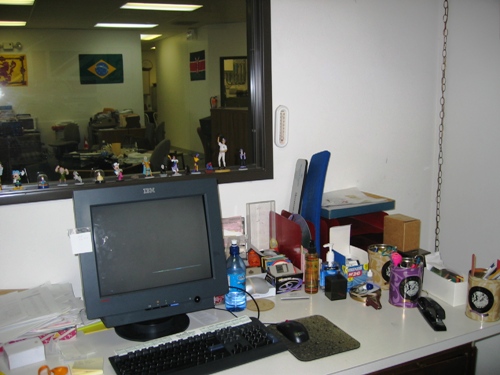 My office at Worldwide Travel after a major catchup and
cleanup effort prior to leaving the company, May 2005.
So this time around with the same material, I find myself thinking about Worldwide Travel again, and also about First Magnus and Beaudry RV, where I worked after getting my accounting degree. First Magnus was big enough to sustain good separation of duties, and yet I suspect I was in charge of too much of the payroll and fixed assets accounting cycles. At Beaudry RV, there was so much segregation of duties that I was in a little ghetto of specific tasks, with little idea what the big picture was, except that it was hard to miss the departure of longtime management and other indications the company was in trouble.

So maybe as I second-guess myself about my competence and breadth of knowledge an an experienced staff accountant, it's not too surprising that I haven't performed every task in every job description that comes along. Worldwide Travel notwithstanding, a single accountant isn't supposed to be in charge of everything from soup to nuts. I only hope that the stuff I have done, combined with a good theoretical knowledge of other accounting tasks, will be enough to match the criteria of some good job somewhere in Tucson, with a large or small company. And when I get it, no doubt I'll compare the new info of my job experience with my knowledge base about internal control and all that jazz.

I love the fact that when you blog about accounting, I know exactly what you're talking about :-).

It's true, though - you need at least two or three people for at least minimal segregation of duties. I've learned the most when I've worked in departments of 5-8 people - enough to divide things appropriately, but no one's work is too specialized. And the wrong person - the one with questionable ethics - in a one-person office can very well be a disaster.