My View of the Big Game 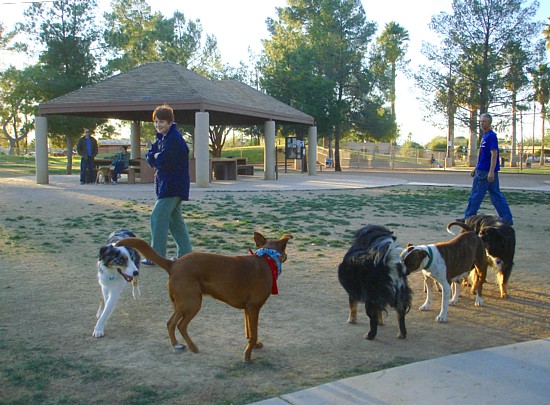 Maybe it's stubborn or perverse of me, or both, but I have never watched a Super Bowl game. On rare occasions I've turned it on for the halftime show, or let it play in the next room in case a commercial sounded interesting enough to take a peek. But most years, forget it. The only thing that tempted me at all this year was the prospect of Keith Olbermann being snarky in the pre-game show; but Keith being snarky about sports isn't remotely as interesting as him being snarky about politics.

So the tv set was still off when I took the dogs to the dog part at 4:44 PM MST. The dog park was somewhat sparsely attended, but not anywhere near deserted. When I got home, John was watching some raunchy anime thing on DVD. That's how much he cares about football.

In fact, the first and last football game of any description that I ever sat through was in about 1964, give or take a few years. I was in elementary school. My dad took us to a Syracuse University football game at the old Archbold Stadium (1907-1978), and informed me that some of the teams past and present players (e.g. Jim Brown) were a big deal. Depending on the year, that particular team probably included Floyd Little, and may possibly have had Larry Csonka, whom my dad generally referred to as "Zonk." I had very little idea what was happening on the field, and frankly, I've learned very little about football since then.

It's a little disconcerting, being at odds with the prevailing American culture. It is pretty much assumed that everyone watches the Super Bowl. The pizza places have specials; Safeway has its party trays; Madison Avenue prepares its commercials. Even priests and preachers consider whether to include The Big Game in their sermons. John drove past a church today that was having a tailgate party. For me, though, the pizza specials sounded pretty good, but the rest left me cold. Is that good or bad, or, more likely, neither?

As I write this paragraph it's just past 3 AM, and I have no idea who won. It's impossible not to know, given that some people at church were practically bouncing off the sacristy walls about it, that the Arizona Cardinals were playing, and it was "a Cinderella story," blah blah blah. Fine. If I apply myself, I can remember the name of the other team, but I had to think about it. What I do know is that someone on Twitter thought a certain play was "one for the ages," and that Bruce Springsteen sang "Glory Days." Good for him.

I hope everyone enjoyed the day: the football and the snacks, if you like that sort of thing; or whatever you did instead. Personally, I read The Mislaid Magician or Ten Years After: Being the Private Correspondence Between Two Prominent Families Regarding a Scandal Touching the Highest Levels of Government and the Security of the Realm, and enjoyed it very much. Tomorrow, of course, I'll have to work twice as hard on accounting homework, but it was worth it. My only problem was that I read Pride and Prejudice at roughly the same time as the previous volumes in the series, and thus had trouble remembering whether certain plot elements were Austen's, and which were from Wrede and Stevermer. I may have to reread all of the above sooner rather than later. Too bad fictional nineteenth century England isn't likely to be covered on the CPA exam!

Are you sure John was just watching anime? ;-) I'll send you a link...

I didn't watch a whole lot of the game either. I watch football, but only when Chicago is playing. I guess that means I'm not a huge football fan.

Maybe it's a good thing you didn't watch, I heard Comcast had some issues in your area. I'm sure you have heard.