Seen of An Accident (sic)

With all the photos I've had to show you over the past week, I forgot to even mention the serious two-car accident that happened about 25 feet from me on Friday evening. I had just pulled up to the corner of Wilmot Rd on a side street called East Calle Marte, from which I intended to turn left onto Wilmot, bound for Safeway. About a second later, two cars crashed into each other right in front of me and spun around. The SUV or minivan or whatever it was pulled off the road into a neighbor's yard, and the sedan backed up a few feet and stopped, facing south next to the median on the northbound side of Wilmot.


It was such a shock that I screamed. A second later (if I didn't pay attention) or a few feet of difference in trajectory and it could easily have been a three car accident, with my Eagle Vision as the third car. Other cars from other directions immediately stopped, and people ran to check on the driver of the sedan. I stayed in my car and called 911. 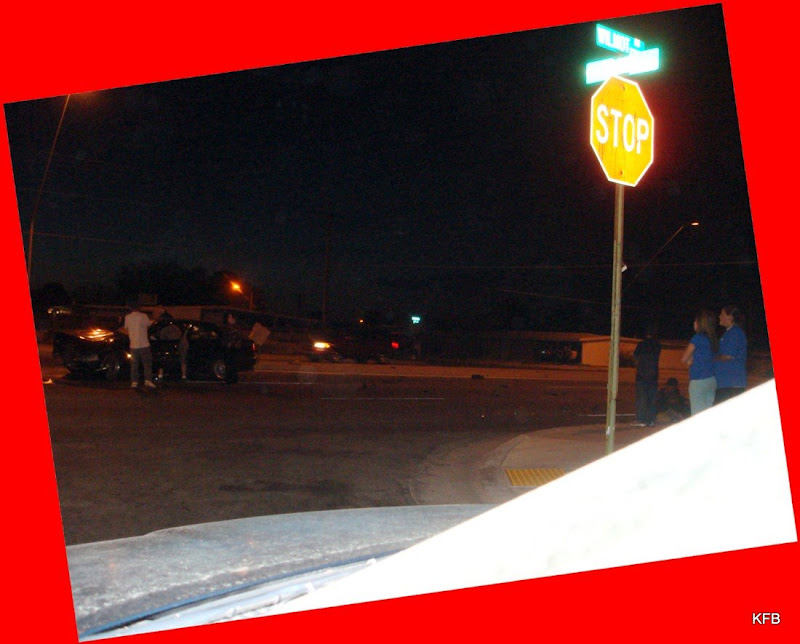 Sorry about the angle. The white and blue areas at the bottom are my car.
People in the neighborhood and people waiting for buses quickly gathered on the curb and sidewalk. 911 asked whether there were injuries and connected me to the police, who confirmed the name of the side street and asked for my name and phone number. I saw someone else on a cell phone before I finished. 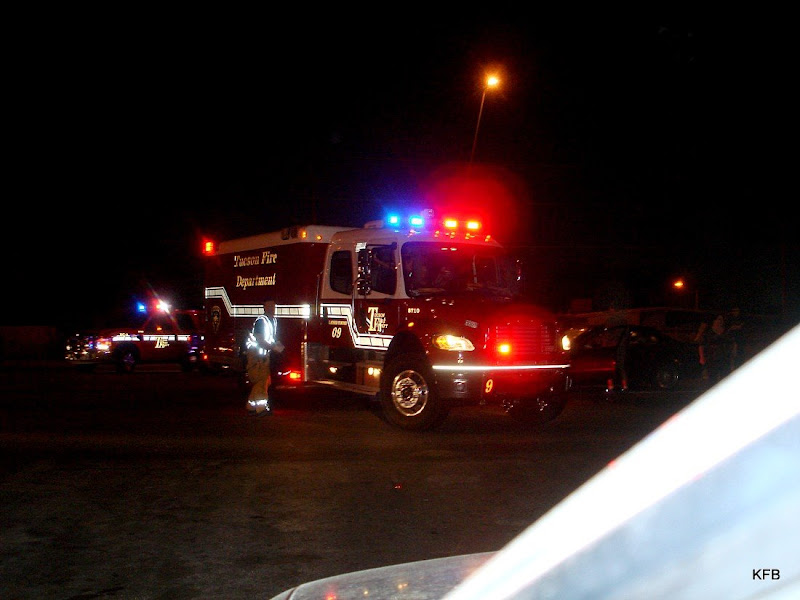 The fire department arrived about two minutes later, being stationed just a few blocks up Wilmot from the accident. I quickly realized I wasn't going anywhere for a while. Not only was I interested in documenting the accident, but I was pretty much trapped. Wilmot was blocked northbound and partially blocked southbound. Diverted cars were turning right onto Marte in a steady flow, leaving me no opportunity to back up and turn around safely. 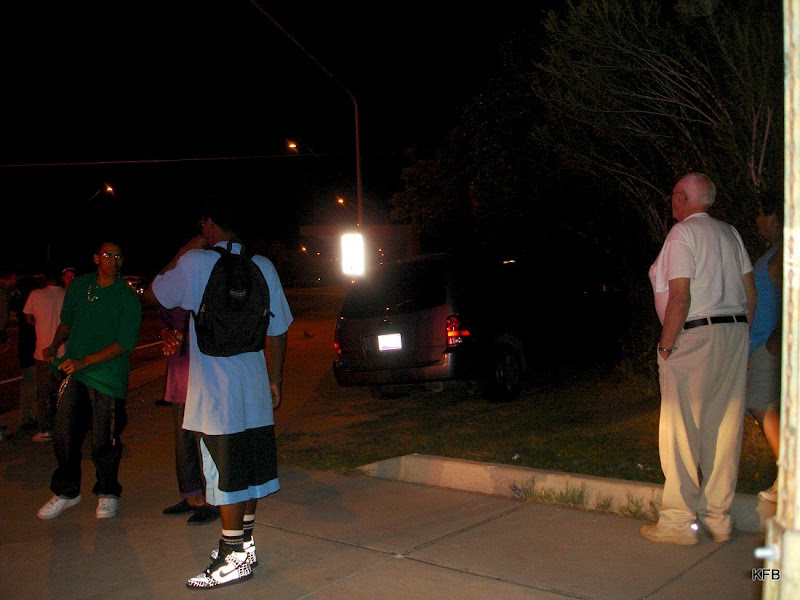 The other vehicle was relatively unscathed - at least from the back.
The police arrived about two minutes behind the fire trucks. 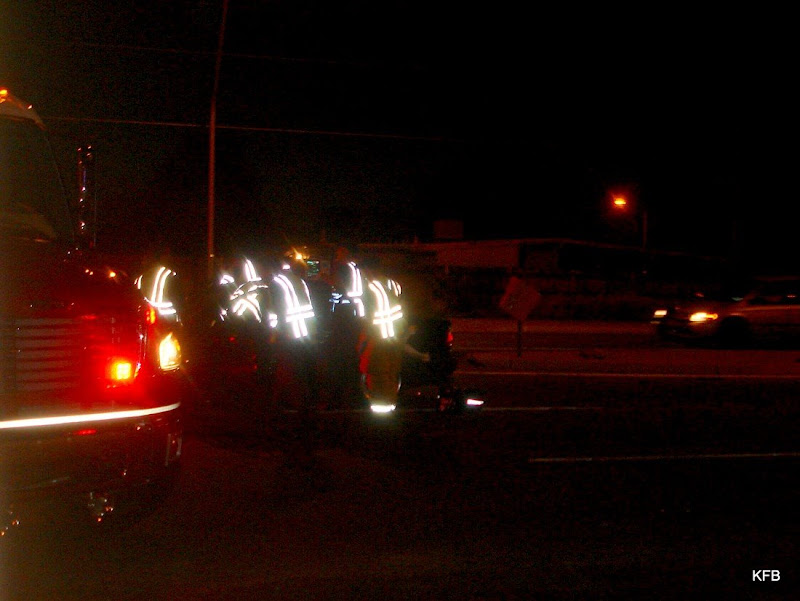 Nearly all the attention was directed at the occupant of the car that was still in the street. 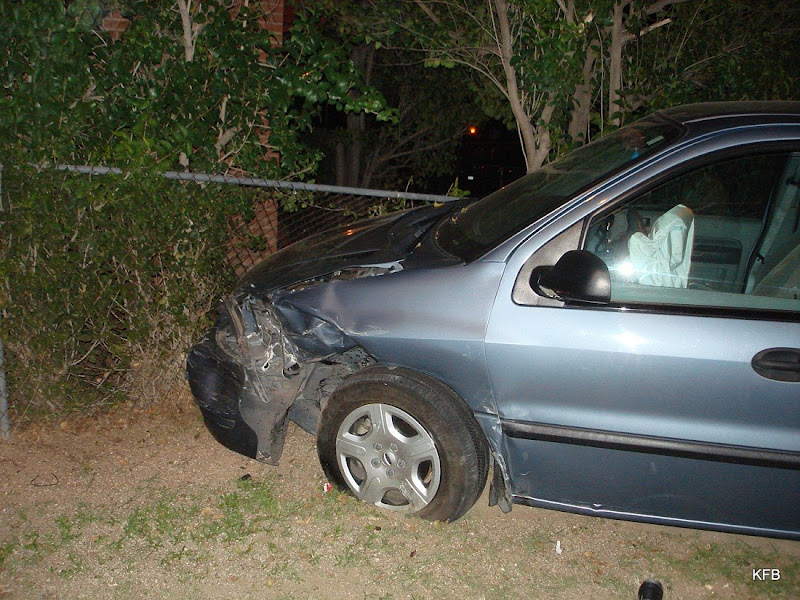 I got out of my car and asked the driver of the minivan whether she was okay. She was. A kid in a green shirt asked me if I saw what happened. As I tried to describe what I'd seen of the accident for a third time (after the 911 and police dispatchers), I suddenly realized that I wasn't sure where each vehicle started from and what each driver was trying to do. Was one turning left onto Marte and one turning left off of Marte just ahead of me? Was one turning on or off of Marte when the other came speeding up Wilmot? I'm still not sure. I make a lousy witness! The kid in green pointed out that the spinning cars and heavy damage and huge debris field in the street pointed to a high rate of speed. I had to concede that he made a good point! 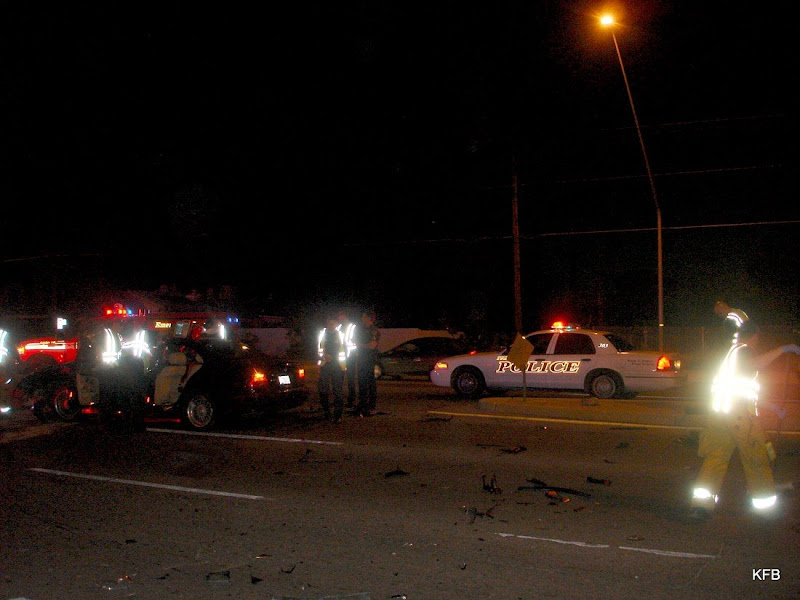 As police directed traffic and spoke to victims and witnesses... 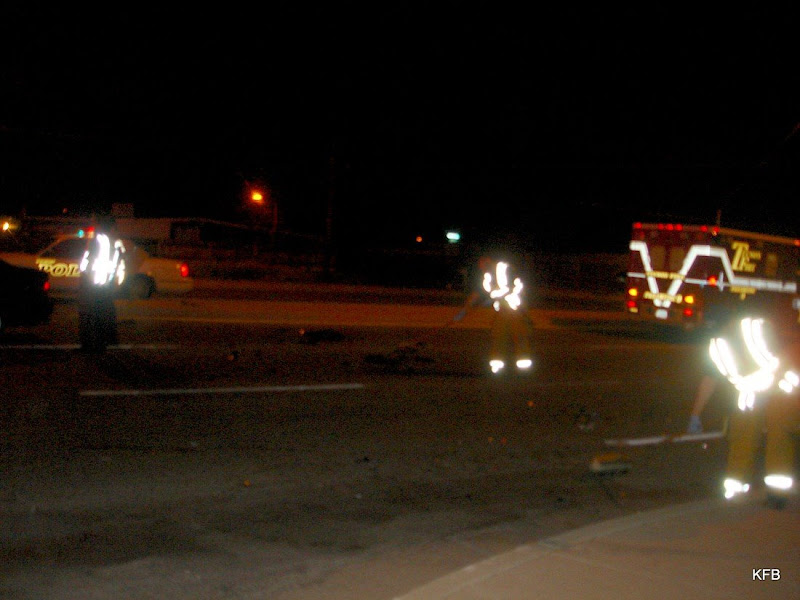 ...some of the fire department folks got out brooms and swept up the wreckage. I wondered whether the police would ask me anything in person, and whether I had anything remotely useful to say, given my failure to observe and remember exactly what happened. A policewoman who was directing the traffic onto Marte looked askance at my car, still in the way, still trapped, still with its lights on. I went over to her and explained my predicament. "You need to back up and turn around," she said. I told her I understood that, but didn't think I could do so safely given all the incoming traffic. "I'll help you," she said, and held up traffic long enough for me to make a K turn and get out of there, for which I thanked her.

I won't be turning left out of Calle Marte for a while.

I witnessed a fairly bad accident once & while I had no camera, I did see a lot that went on, mentioned that I did & they said: We have this covered.
Uhm, ok. I guess you guys know everything, even though you didn't see the accident!~Mary