I was wrong about winter being essentially over in Tucson. Not only has it been chilly and rainy for the past 26 hours or so, but it looks as though we may get more than a distant view of snow on the mountains in the next few days.

Here is how the Santa Catalina Mountains looked before and after church today. Before church, the mountaintops were hidden in a bank of gray cloud. After church, snow was still visible on the mountains, but the sky seemed to be trying to clear up a bit. It never made it.

By 4:30 PM it was raining again at the house, and I didn't think I could reasonably take the dogs to the dog park. The rain stopped soon after, though, and at 5:15 I decided to take them anyway - briefly. It was lightly sprinkling as I took them to the car. As soon as I sat in the driver's seat, the rain began in earnest. I called John from my cell, and told him I was taking the dogs to PetSmart instead. The dogs were expecting the dog park, but they would have to make do with exploring someplace indoors instead. 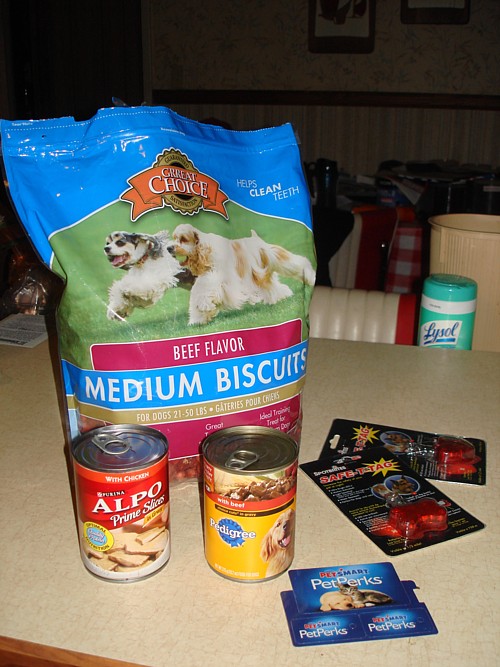 Some of our PetSmart purchases.
I'm sorry to report I took no photos at PetSmart. Frankly, handling two dogs plus purchases inside a large, busy store is enough to handle without pulling out a camera. Also, I forgot. But Cayenne and Pepper enjoyed meeting several other dogs in assorted sizes, and sniffing at bags of rawhide and dog food. They weren't so pleased with the shopping cart an employee eventually grabbed for me, but I needed it badly once I discovered the Alpo at 61 cents a can. By that point I already had an armload of Pedigree at an almost-as-good price. 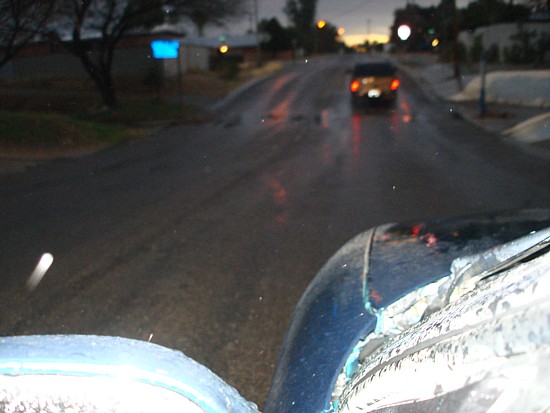 The wash behind the high school, 6:09 PM
When we came back, the wash near 22nd and Kolb was only a little flooded, and I was a little disappointed. I got the dogs home, messed around on the computer for a little bit and went back out for food. 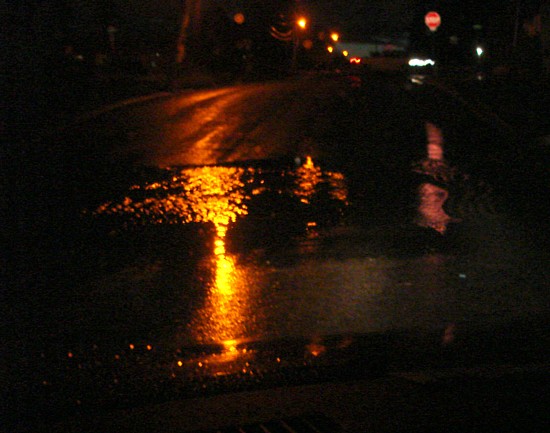 The wash behind the high school, 6:50 PM
When I reached the wash a second time, conditions had changed considerably.

At one point this evening, I found a forecast on the NWS/NOAA site for Tucson that predicted valley-floor-level snow east of Tucson by Tuesday morning. That graphic went away a few hours later and was not replaced. I don't know what the most current prediction is. I'm hoping for snow in the city: not a ton of it (we never, ever get a heavy snowfall in town), but enough to photograph before it melts away.

It's been kind of a rough weekend. The company John works for laid off some people on Friday, and although John survived the cut, our position seems more and more precarious. I may yet have to take some low-paying job for high school graduates that makes the check cashing store job seem like a great deal in comparison. We'll see. But at least I have some dramatic weather to divert me.