Weekend Assignment #256: Is It Tax Time Yet?

I spent a good part of Thursday gathering W-2 forms and other documents and starting my 2008 income tax return. Hence this week's topic:

Weekend Assignment #256: Tax time for individuals in this country starts in late January when the tax forms arrive, and runs through April 15th or so when the tax return is due. Do you file your taxes as soon as possible, at the last minute, or somewhere in between? Is there a particular reason for this?

Who actually does your taxes, and with what software or other resources, if any? 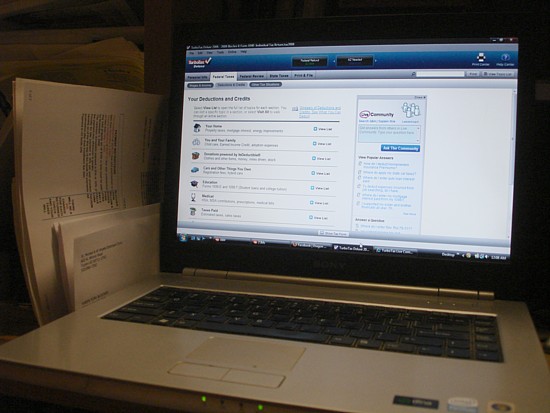 Left to my own devices, I would probably procrastinate on the taxes, and have sometimes done so. This is very likely because finding all the relevant documents tends to be a problem, and because I get nervous about whether this year we'll owe more taxes. It's been years and years since we got stuck with a huge tax bill through [name redacted]'s incompetent bookkeeping, but I suppose it left me a little gun shy.

John feels much of the same stress over taxes, but with the opposite result. He wants to know as soon as possible whether we're getting a refund or need to come up with more money somehow. If it's a refund, he wants the money right away, especially in these parlous times. If the news is bad, he wants to know about it and begin dealing with it.

My having been out of work the last 3 1/2 months of 2008 complicated our tax situation slightly, and increased my stress over the unknown effect of it. My unemployment pittance has no deductions, so in theory I owe taxes on it, presumable at some low rate because it's not a ton of income. But at the same time, John's still making good money, which is how we're scraping by. So how does that work out? I was genuinely worried that this would be the year that we owed the IRS, just when we could least afford it.

But it isn't, thank goodness. I'm only halfway through the TurboTax screens, with all the income in and some of the credits and deductions, and already the little box at the top shows a healthy federal refund. Maybe we'll end of owing the state a little, but if so it won't be bad. I don't know where we stand there, because I haven't even downloaded the state software yet.

TurboTax, by the way, is a wonderful thing. It isn't perfect; last year I failed to enter our property taxes, which may mean I wasn't prompted to do so. But even if something like that isn't operator error on my part, TurboTax is a huge help to me. I used Tax Cut for my only tax accounting course, and that's pretty good too; but TurboTax is clearer and easier.

You might think that as an accountant, I shouldn't need the tax advice and general hand-holding that tax software provides, but I do. Prior to 2005 or so, my total experience with filing taxes consisted of doing it once before I got married, if that (Mom paid me one year NOT to file a return on my part-time income from Friendly Ice Cream), and filling out a 1040EZ for Mom circa 2000. All those years in between, either John did our taxes, or they were done by a CPA firm in conjunction with taxes on John's small business. And that, by the way, was when we got the $10K tax bill. It wasn't until John's business was gone and I had my tax course at University of Phoenix that John quite sensibly stuck me with the family taxes, on the grounds that "You're an accountant." So you see, I'm actually far less experienced with income tax than many non-accountants my age. I need that friendly TurboTax questionnaire, even if it does let me down sometimes. I'm actually a little stuck at the moment in fact, waiting for an answer to my question about how to report the $70.83 I got on a 1099-MISC from First Magnus Liquidating Trust, recognizing the tiny fraction of my unpaid wages from First Magnus that finally came through last year.

And I'll tell you a secret: tax professionals use software, too. In that less-than-satisfactory job I held briefly a month ago, to do taxes for people inside a check cashing store, I was plunked down at a computer loaded with a pro version of an online tax software package. Nobody coming through the store had their W-2s yet, which was probably just as well. I spent the week, when I wasn't diverted from the store by their computer problems and the presence of cops, entering online sample returns into it. I have to tell you, that professional software was a lot like TurboTax. If I'd done a real return it would have been reviewed by the CPA firm for which I was temping, so I suppose that's where the value lies in using a service like that. But at my end, it was like using TurboTax, only for fictitious people, in a building with no public bathroom. Frankly, if the client is even a little competent and has a simple return, as most of the folks at a check cashing service do, he or she is better off using free tax software online at the local library and then mailing it in.

How about you? Are you a tax go-getter or a tax procrastinator? Do you fly solo, use computerized help or palm the tax preparation off on someone else? Tell us about it in your blog, with a link back to this entry, and leave a link to your entry in the comments below. I'll be back in a week to post the results. Meanwhile...

For Weekend Assignment #255: Two Centuries Later, I asked you to consider the impact of Abraham Lincoln and/or Charles Darwin on your life. A few brave souls responded:

I'll have to give thought to this one as well...

I would rank Lincoln up near the top of my list of great Presidents, if I had one, especially in the context of the times over which he presided. However, I can't say he's had much impact on me personally - my own forbears didn't even reach this country until about forty years after the Civil War was over..

This is pretty easy for me. See, growing up in Illinois you have no choice but be reminded about good old Abe Lincoln and how much he meant to our country. Usually this involves a filed trip to Central Illinois to see some log cabins he may have lived in at one time. Also, there is no way one can get through school without doing some kind of report on Abraham Lincoln. I don't remember when I did one, but I know I did. Heck, our slogan is "Land of Lincoln."

That's it for now. Whether or not you're ready to do your taxes (or have already done them), please participate in this Weekend Assignment this week. And yes, I'm still in desperate need of your suggestions for future Weekend Assignment topics. Email me your ideas at mavarin@aol.com anytime. If I use your topic you'll get full credit and my undying thanks. Next week we'll probably be digging through the suggestion box, so why not add to my options?

Wow, looks like a quiet week. Perhaps there are too many tax procrastinators? :)

We were going to start on taxes this weekend - it didn't happen, but but I wrote about it anyway.

Doing taxes online for free at the library is a good idea. I would never have thought of that.

Anyway, here is my answer.

This is my first weekend assignment. I know I'm a little late, but couldn't resist now that I am a member of the ABA. I hope it's not too boring -
http://savvyworkinggal.blogspot.com/2009/02/my-career-as-tax-accountant-and-weekend.html