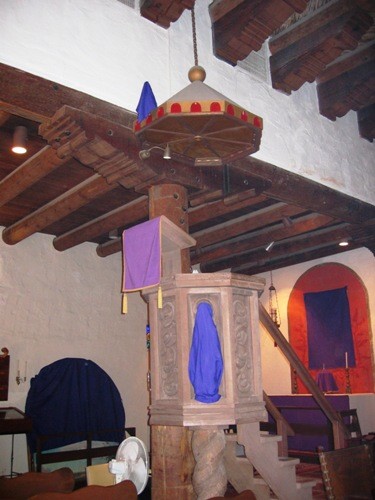 I've been sitting here all night, trying to think what to tell you about all the vague ideas that have been swirling in my head. Yesterday was Ash Wednesday, so I didn't eat much all day. I worked at St. Michael's in the afternoon, and was one of only two acolytes serving at Mass in the evening. Lent has begun, that season of repentance and abstinence, of taking stock of one's life and amending it for the better. Everything at church gets covered up with purple cloth, signifying (as some religious book I had as a kid put it) sorrow for sin.

Well, in theory that's what Lent is for. We prepare for the memorial of the death and resurrection of Jesus, and review and renew our relationship with him. Traditionally that involves going to church a lot and not eating meat on certain days, confession of sins and so on. The most famous manifestation of it all is the idea of "giving up something for Lent." Father Smith at St. Michael's has argued against this concept for years. Instead of giving up chocolate, which doesn't accomplish anything spiritual, one should do something positive that brings you closer to God.

But...how do I do that? Every year I try to find a way, but somehow Lent always ends up seeming like a missed opportunity to accomplish something meaningful.

So that's one track of what's been on my mind. Overlay onto that the continuing discouragement of no job interviews - not even a nibble! - and the suspicion that I won't get a job anytime soon, and what is wrong with me, and how can employers know without even picking up a phone that they should pass me over for all those jobs that they list that seem to fit my skills perfectly? And the CPA review thing is a longer and harder slog than even I expected, let alone John, who is restless over what seems to him like a lack of progress on my part. And yes, I should put in more hours each day on the studying. There, I said it. But doing it won't be that easy. There are no quick fixes here, no magic way to prepare for the CPA exam as fast as John wants, even if I do the diligence of eight hours a day studying. There's too much material I've forgotten or never knew. It will take months and months to get through it all. Even if it were all relatively fresh in my mind from school four years ago, it would still take months and months. Sorry, John.

Sorrow for sin. Yeah, I've got that. The sin of despair. The sin of giving myself a break, or not trying long enough or hard enough, of not washing the last dirty pan or getting the last bit of dried food off that section of counter. The sin of being stuck.

Yeah, I'm sorrowful. Okay, I repent. Now what? Now I try to do better, right? Except John would echo Yoda, "There is no try." Phooey on that. I can and will do better, but I know it will never be enough. That's human nature. When I worked for Buzzard's Nest Records all those years ago, I used to say to myself, "I have to be perfect this week," because anything short of that would be pounced on. But it's an impossible standard. Nobody can be perfect this week, or any other week.

On the other hand, who says I have to be perfect now? What John is looking for is visible steady effort and noticeable results. Well, okay, let me recommit to the effort. But I can't guarantee the results.

I agree with Father Smith. The positive is always better for spiritual (and physical) wellbeing than the negative.
'Seeking'IMHO is the most positive move we can make.
I hope you find your reward soon.

Sometimes you sound so much like me it's spooky. I do envy you one point. You did finish your degree! I have "returned" to school 3 times now and have yet to finish. It would help if I would just find a major and stick with it. I've been through 4 now. I should make some dinner and clean up that last pan soaking in the sink from last night too. And put away the rest of the groceries still in bags in front of the pantry shelves. I should. And I will stop listing ToDo's because I will just end up more depressed and stuck. *sigh*

Karen, I just finished writing my Round Robin Photo Challenge Purple post for Saturday and here you are posting about Lent and covering the church statues in purple covers for the duration. I'll be interested to see what you post for Saturday. :)