New Ways to Be Ripped Off 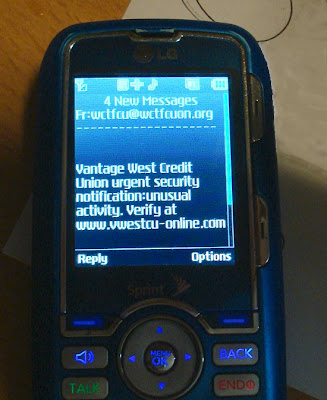 The first time it happened, I could hardly believe it, because I saw no way for the scam to work. When it happened again today, I accidentally did enough investigating to settle that question, without risking any personal information.

Did you know that there is such a thing as phishing by cell phone?

The arrival of this particular text message on my phone this morning actually woke me up. My alert sound for text messages (which I send and receive as seldom as possible) is a sort of rhythmic knocking that got Cayenne barking experimentally in the direction of the front door. The moment I read it, I knew it was a scam. I have never had any dealings with Vantage West whatsoever.

(Aside: why do I dislike text messaging? Text messages cost me money, and "textese" shortcuts are an abomination of illiteracy, and punctuation on my phone is awkward to achieve.)

Phishing by email, of course, is practically a time-honored tradition by now. Hardly a day goes by when I don't get at least one email purporting to be from a bank, a credit union, Paypal, eBay, AOL, or even an online greeting card service. A link in the email sends the unwary recipient to a fake version of the entity's website, where the mark is then encouraged to log in, thus providing screen name, password and, with any luck, account numbers and other info. Years ago I dropped my Paypal account precisely because I was constantly getting phishing emails in Paypal's name. I figured that if the real Paypal had no reason to ever contact me, I'd now for certain that every such contact was a fake.

But on my phone? How is that supposed to work? I had forgotten that modern phones can also connect to the Internet. It's a capability I've never set up on any phone, partly for reasons of cost, and mostly because I see no point in viewing the web on a three inch screen instead of a 14-inch one. But when I explored the options on this message, the phone tried to connect me, presumably to their fake site. It did not succeed.

I suppose that with the economy this bad, one ought to expect an increase in attempts to rip people off, but really, I suspect that the proportion of dishonest people in the world is the same as always. It's just coincidence that I've run into several unusual examples in a sort time. Last night I clicked on a link to a jobs site I'd never heard of, from an email that solicited me by name. I wrote a rather good cover letter, pasted in my resume - and was asked for approximately $30, a fee that would supposedly be refunded by the employer that hired me off the site. Rather than pull out my wallet I searched for the company name, and found it referenced on two scam-watching sites, albeit with no particular evidence of wrongdoing. Fortunately, the site had a handy "delete this account" button. No, they didn't get a credit card number from me, or anything else that isn't readily available online. And they may have been legitimate, more or less. But I didn't want to take the chance.

And then this afternoon there was this: 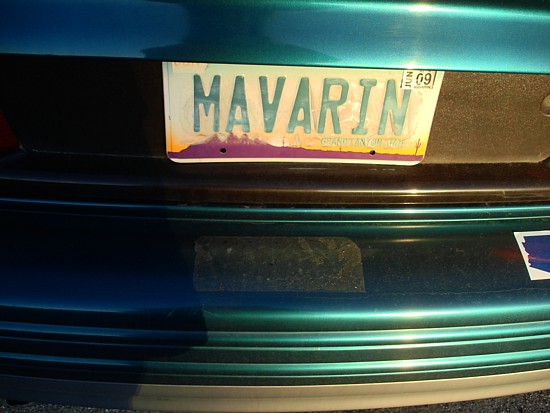 See that oblong of leftover adhesive? That's where my Obama sticker was. Last time I looked, one corner had come loose. Looks like someone literally ripped off the whole thing. Darn 'em.

Email ThisBlogThis!Share to TwitterShare to FacebookShare to Pinterest
Labels: Ripoffs

You know, that really burns my ass. Someone felt justified in vandalising your car (by ripping off the bumper sticker - oh, yes, that is vandalism) simply because they disagreed with your opinion on something. What kind of person feels they are priviledged enough to censor other people's views by perpetrating a deliberate criminal act? And if you spoke to them about it, they wouldn't understand why you thought they'd done something wrong. I'm really steamed by that. Someone needs their ass kicked.