Actual Progress, Actually Being Made

I went to bed just now, only to realize about a minute later that I hadn't blogged yet. Oh noes!

That probably shows you the level of my distraction at the moment. Aside from some unnecessary but enjoyable messing around on Facebook, I've taken on yet another volunteer task at church - have I mentioned this? - and I'm back to studying for the CPA exam, AND I'm actively editing Heirs of Mâvarin. Let's discuss these one at a time: 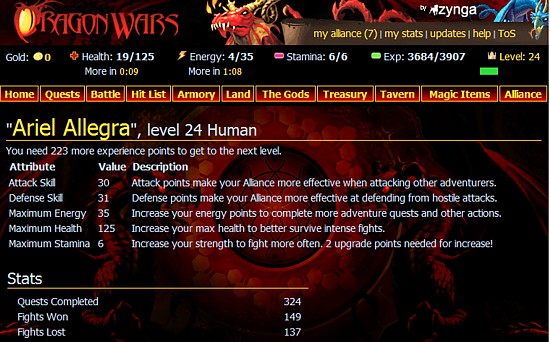 There's a game on Facebook called Dragon Wars. It's not a full-fledged online role-playing game, but a sort of simplified one that focuses more on end results than individual actions. Key attributes such as health, energy, stamina and real estate income offset by maintenance expense (no, really!) are slowly replenished on a timed basis, so by and large it's a game of planning strategies and waiting to do the next thing. That leaves lots of time to do something else, such as an AUD lesson, while waiting to do the next quest or deposit the next payment of rental income.

As I edited the screen shot above just now, I realized belatedly that someone had slammed my character in a massive and/or multiple attack, and my health points were suddenly dangerously low. The main interplayer activities or the game are forming alliances and attacking other characters' alliances. I've reached the point in the game at which many players with similar experience levels have formed alliances of dozens or even hundreds of players. There's little I can do with my alliance of seven characters to prevent someone with an alliance of 103 from doing my character a lot of damage in a hurry. Fortunately, in this game, health can be regained, and death is not the end. Still, I could really use for allies. Wanna play?

Meanwhile at church, I'm still webmastering. In the next day or so I need to delete a mass from the schedule due to an elderly priest's infirmity, post the weekly announcements from three sources, edit and post a photo from coffee hour, and maybe set up a MySpace page. I'm also doing some light bookkeeping now at church on a volunteer basis, essentially a data entry and reconciliation task. I had my first session on Friday. There was a vague offer to pay me a small fee, but that would complicate the unemployment issue and benefit no one.

On the employability front, tonight I finished my second AUD assignment, with strong understanding of the material and perfect test scores. I was right: the Auditing section of the CPA review course is much easier for me than the FAR section, especially with the video lectures the company threw in for that section as part of the December special. I'll still need to conquer the long slog of FAR material, but I'm nevertheless feeling much less discouraged now.

As for the novel, I'm editing Chapter 8, on page 300 in my doublespaced manuscript files. I had been stalled for a while, but now I'm going on at a good clip, tightening prose and fixing problems in flow and logic. Just tonight I had to rearrange two paragraphs when a minor character suddenly changed the order of his thoughts, and was right to do so. Also, a strictly offstage character announced that he made the deadly necklace in Chapter 12, and I had to go back to Chapter Six to get his name. And finally, when I finished editing Chapter 7, I realized that Chapters 6 and 7 needed to swap titles to fit the content of the scenes. Fun stuff, and more to the point, it all represents an incremental improvement in the book.

But other than that, and the dishes, and the dog park, and getting ready to do the taxes, and online job hunting, I'm not doing nuttin'!