The Monkeys of Nimbus

Valentine's Day actually went pretty well. John liked the Cayenne valentine and wildflower seeds I gave him, and at 3 PM we headed out to the south side of town to eat a late lunch at Nimbus Brewing Company.

Half an hour later, we admitted that we weren't going to find the place based on our vague memories, and drove home. John was last there close to a decade ago, and I had only seen it at a distance from the road. What road exactly, I wasn't certain.


It turned out to be very close to where John thought it was, on 44th near Alvernon. It just needed to be reached by a roundabout route through an industrial area. We had nearly gotten there, but turned left instead of right at 44th. Google Map in hand, we found it easily.

Nimbus is Tucson's primary microbrew company, the local ale that is bottled and sold around town. With the economy in such bad shape, John wants us to support local businesses when we can, to help them keep going until things pick up. I don't drink, but red ale wasn't the point of the outing for me. I was there to do something fun with my husband, a much-needed rutbreaker and a chance to take some pictures. 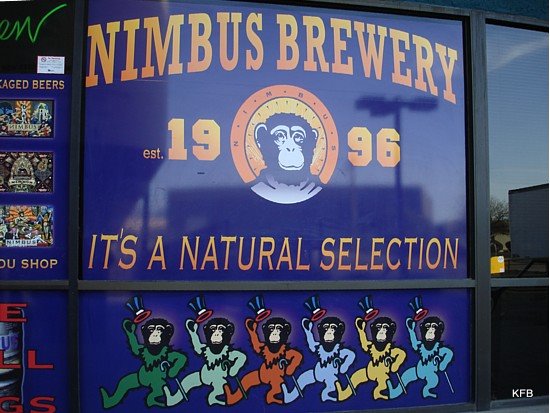 And Nimbus certainly provided interesting sights to photograph! For some reason I've so far failed to suss out, the iconography of Nimbus has a lot more to do with semi-evolved simians than with clouds or halos. I had no idea when I wrote about Darwin on Thursday night that on Saturday that I would visit a place full of playful images satirizing his theory. 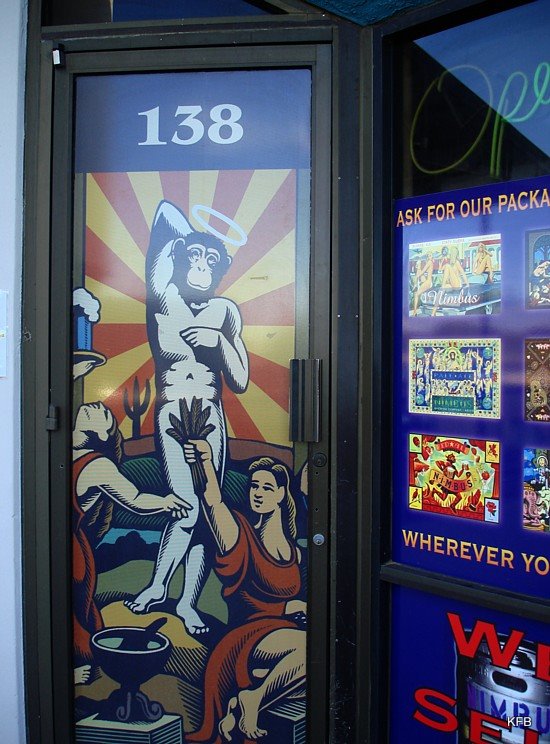 And oh, yeah, they make fun of religion, too. 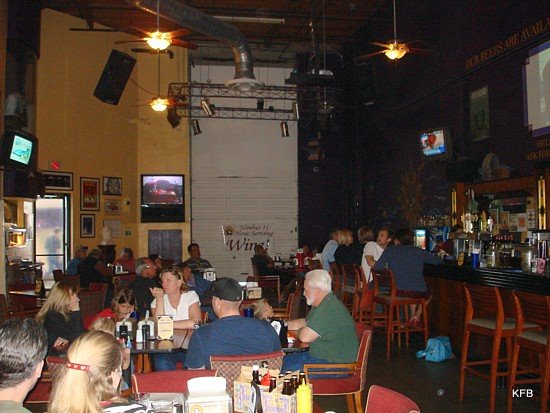 Inside it was kind of dark (I've lightened the photo above substantially), especially for John, who was wearing his sunglasses. Nearly every table on the main floor was full, so good on them in these parlous times.

My steak sandwich was good, and I assume John's burger with chipotle was good also. The service was - well, it's not a place you go if you want to be waited on. You go up to the bar and ask for a menu, and that's also where you place your order and start a tab on your credit card. But the staff was courteous, and the wait for the food was fairly short. John had brought a large empty bottle from his last visit years ago, and bought a refill. He's pretty sure they got the order wrong, and gave him pale ale instead of the red. But it's okay; he likes that, too. 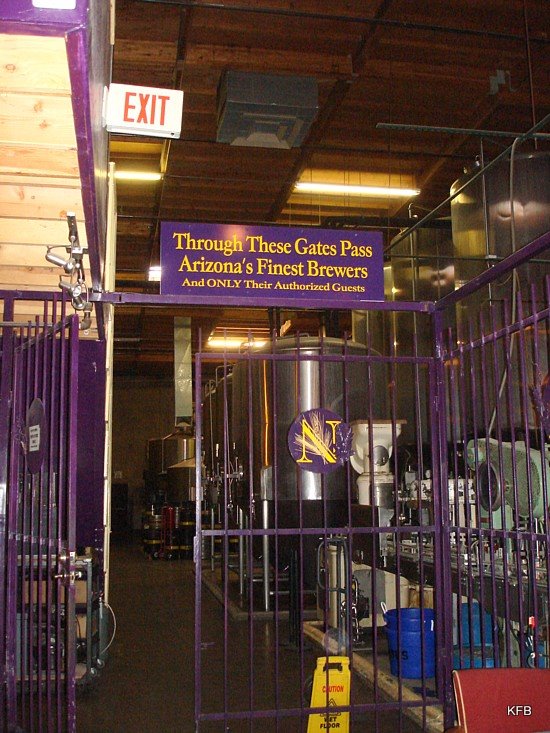 The ale is said to be the best in Arizona. I have no way of judging that, and don't really care one way or the other. For me it was all about the look of the place. Behind the brew pub area, just a few feet from our table, was the brewery itself, in plain sight behind purple iron bars. 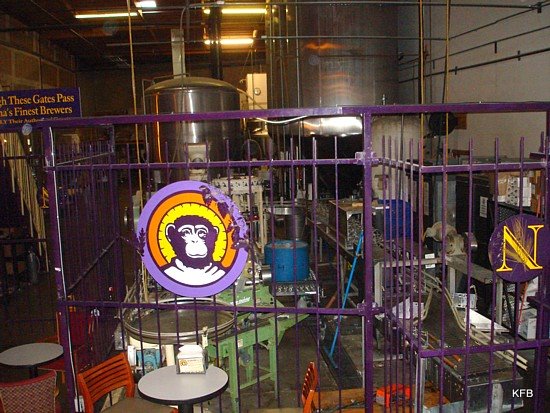 Brewing was not in progress, and customers aren't allowed back there, obviously. But it was still cool to see. 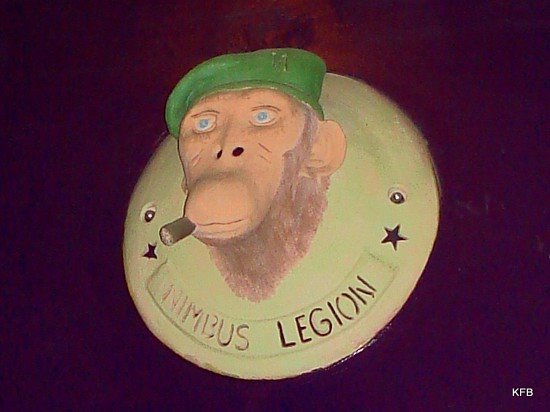 Also inside was more of the monkey stuff, including this "Nimbus Legion" plaque... 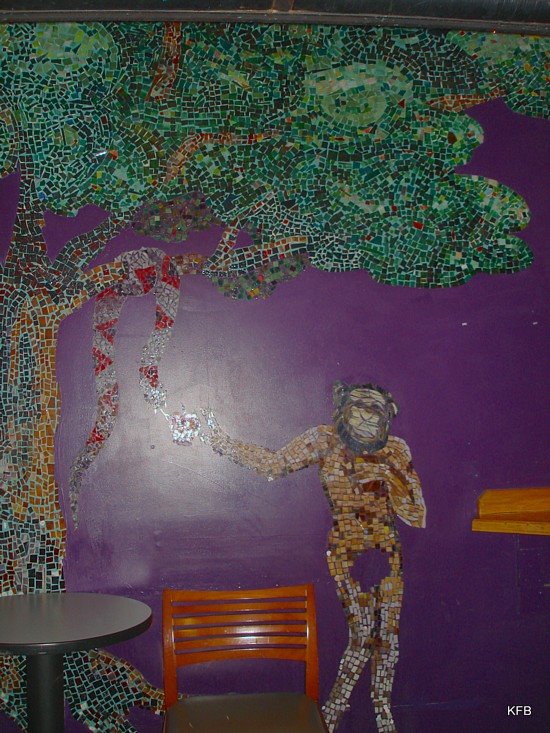 ...and a monkey-Eve taking an apple from a ceramic snake. 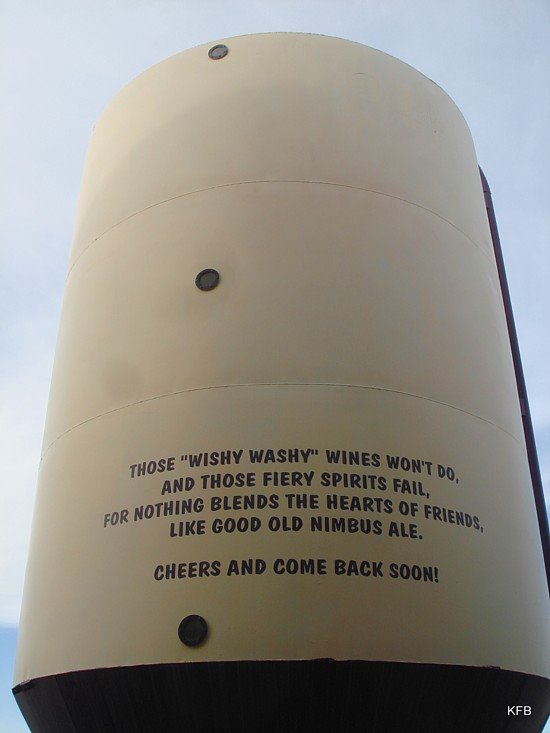 Nimbus has a final message for customers on their way out, in the form of a poem on the back of their water tower. 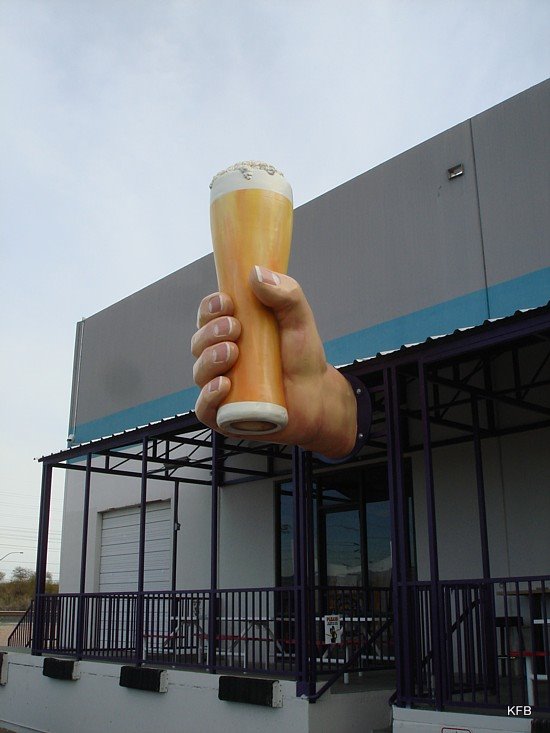 And of course, coming and going, they raise a glass to us.

I like going to places that make beer, or have odd brands. Sounds like a neat place. I'll make sure to try it if I ever get to Tucson.

I can not stop laughing!!
What a place...I love that you did get enough pictures so it didn't leave any doubts that this place is on the map.
wow...
Hugs!
TJ