It's virtually impossible to take a good photo of ducks in motion at sunset with an inexpensive digital camera, while holding back two dogs who are straining at their leashes. Just in case you ever wondered!


But that's what I tried to do for Carly's Ellipsis Monday Photo Shoot #25: Birds. It was 5:40 PM when I took the dogs to one of the duck ponds in Reid Park, somewhere between the lion in the zoo (I heard it roaring) and the dog park. The dogs found it all very exciting, especially Cayenne. The photographic results are technically not very good, however, what with the low light, the camera shake and the moving ducks, plus I think my lens was dirty. But when I lightened these up, some of them were rather interesting anyway. 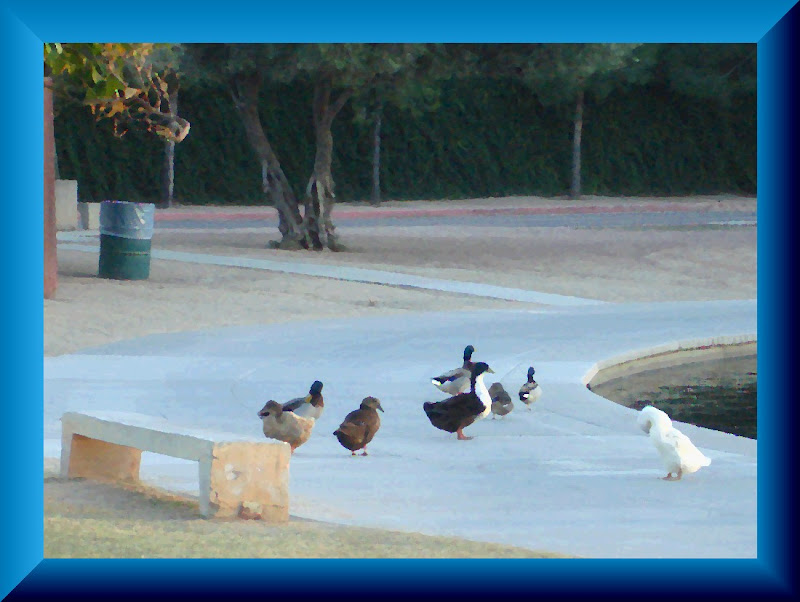 It was easier to take the photos before the dogs noticed the ducks. This batch was off to the left, possibly downwind. I liked the cropped edit enough that I've put it through the watercolor and frame effects here. 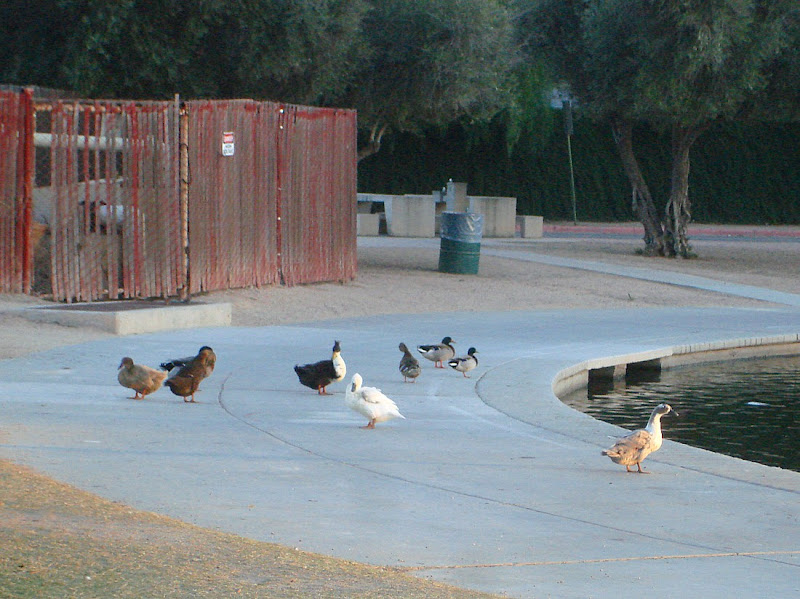 Carly asked to see a white bird for extra credit, preferably a heron or an egret. No such luck on those, but here's a white domestic duck. I even went through six volumes of physical photos from the 1980s, in a period when we did a lot of traveling, and photographed a lot of birds until the Canon AE1 was stolen. But I didn't find the shots I wanted, and I've previously scanned and posted the best ones of what I did find. 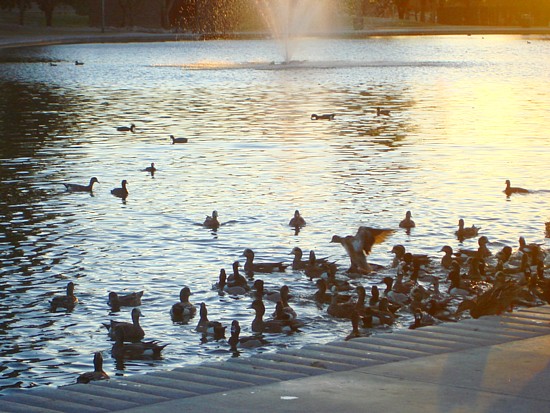 There was an Asian couple feeding the ducks when we arrived, and many of the ducks and coots were on the sidewalk until they saw the dogs. Here is the tail end of the birds' retreat into the water. 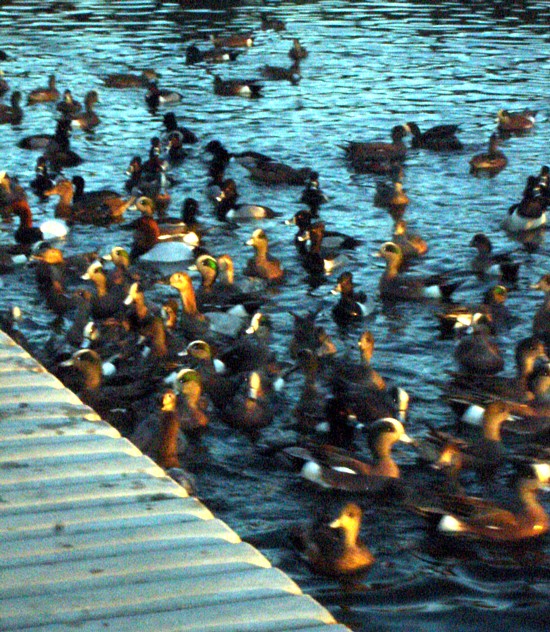 The color of the water here is the result of my letting my software's autoenhance function choose the shade of the image. I kind of like the grainy wonkiness of it. It reminds me of some old Life magazine photo that I can't quite remember. 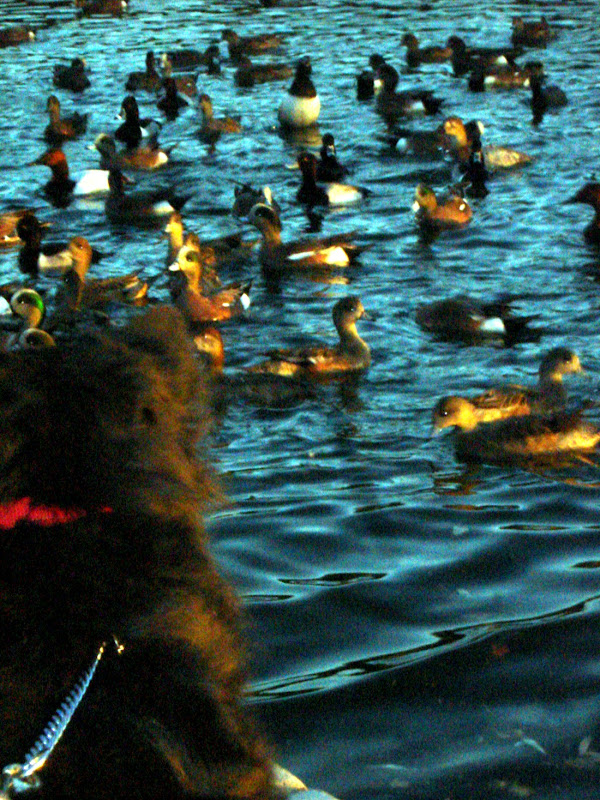 And here we get into my favorite shots of the set, even though they're kind of terrible. I had trouble getting the surging dogs into the shots, especially both at once. But here's Pepper, sort-of scaring the ducks and coots... 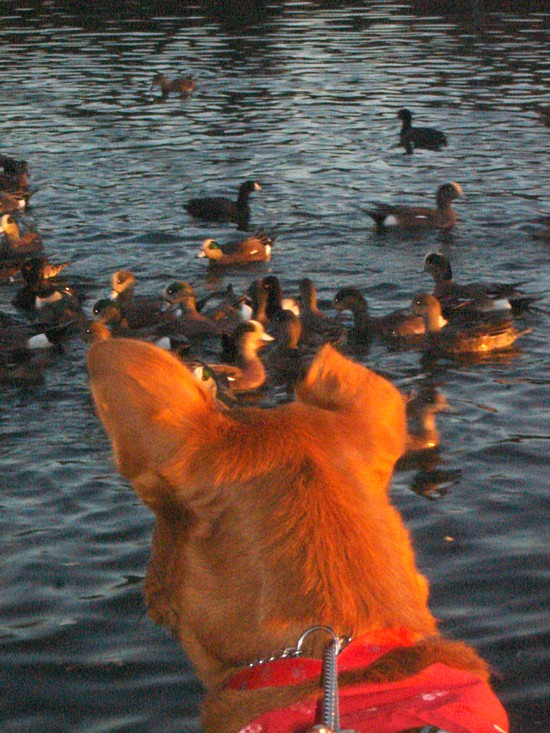 ...and here's Cayenne, just dying to chase waterfowl, most likely for the first time in her young life. 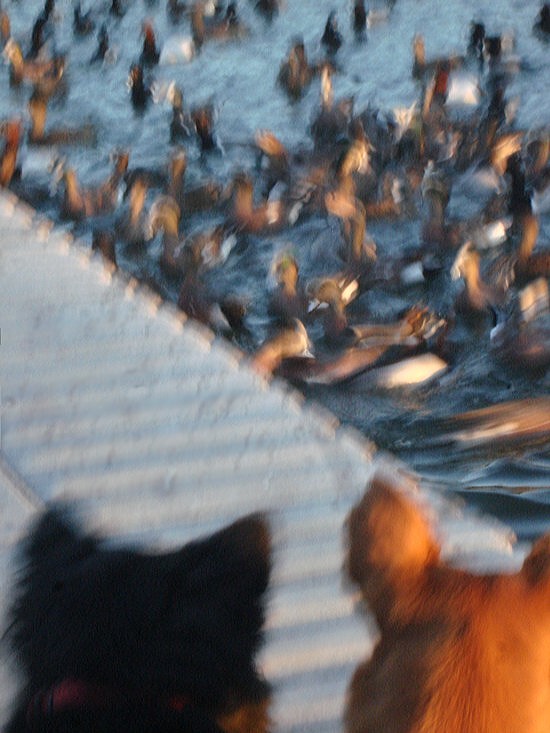 And here they both are, making the ducks panic again. Again, it's more than a little blurry, but I like the way the ducks and the water look.

There are a few more shots in the Picasa album I set up for this entry; click in any photo to get there, and to see each one full size. And be sure to check out Ellipsis each week for the Ellipsis Monday Photo Shoot topic, with links to the previous week's participants. And check back here tomorrow night for better bird pictures - I hope!

Update and clarification: the two duck ponds are not in the same part of Reid Park as Miko's Corner Playground dog park, but hundreds of feet away. Here, I've marked up a Google Map to show you:

The other duck pond and other parts of Reid Park can be seen in my entries Round Robin: Light Moves Over Reid Park and A Reid Park Ramble, continued.

Holly would definitely love to jump in and play with the ducks.

Great ducks! That is such a wonderful dog park, I think I would enjoy seeing it in person one day. :)

I love all the pictures, especially as I can just imagine how the dogs scared the ducks. LOL!

That is a heck of alot of ducks. I bet they drive all the dogs at the dog park crazy!

One of my dogs lives for chasing the ducks back into the canal where we go for our walk. You did very well to get your photos of it and I think the blurring adds the sense of frantic motion so well to the finished picture.

Looking at those shots makes me think of Spring. Did your dogs want to jump in after the ducks? Quincy would have probably pulled me in. :)