I took 159 photos today, many of them for this week's Round Robin Photo Challenge, "Light Moves," as suggested by Julie and chosen by Steven. I strongly suspect that I've got about a week's worth of material here, but for this first installment let's narrow my focus a bit. This entry is about the movement of light in Reid Park as the sun falls toward the western horizon. Stick around; there's a lot more to Reid Park than you've seen in this blog to date. Today the dogs and I went exploring!

(Please note that some of these photos may be a bit dark. I resisted the temptation to lighten anything in an attempt to show the way the light really was.)


When we arrived at Reid Park in midtown Tucson around 5:15 PM, there were already long shadows, but still plenty of sunshine. I parked in the lot that edges 22nd St. and led the dogs past this rather beautiful doorway sculpture, bound for the "other" duck pond. 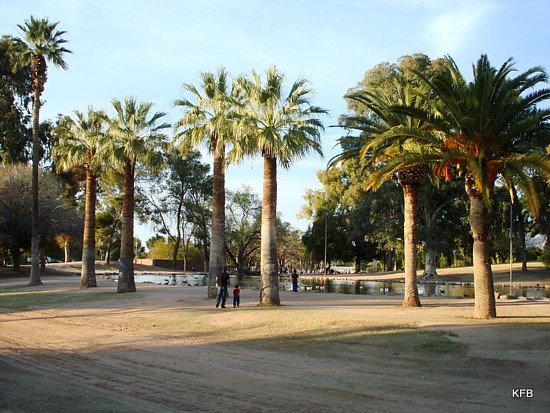 Unlike the duck pond we visited on Monday, this one (which is adjacent to the other one) lacks a fountain. Still has lots of ducks, though, and people to feed them.


I got much better pictures (or at any rate, different ones) on this second attempt to photograph dogs and ducks, with lots of light effects on the water. I've added them to the Picasa Dogs and Ducks album. 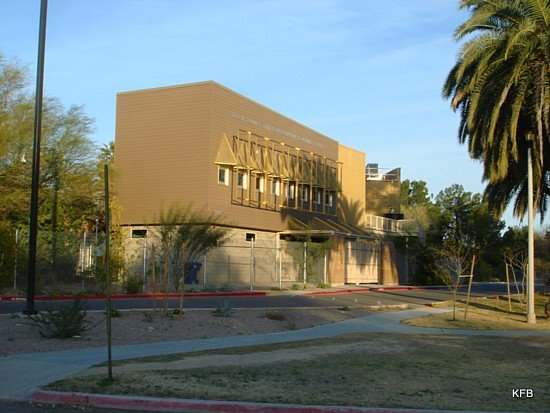 This Conservation Learning Center is solar powered. Notice the ground is entirely in shadow by this point, not to mention the tree-shaped shadows on the front of the building. 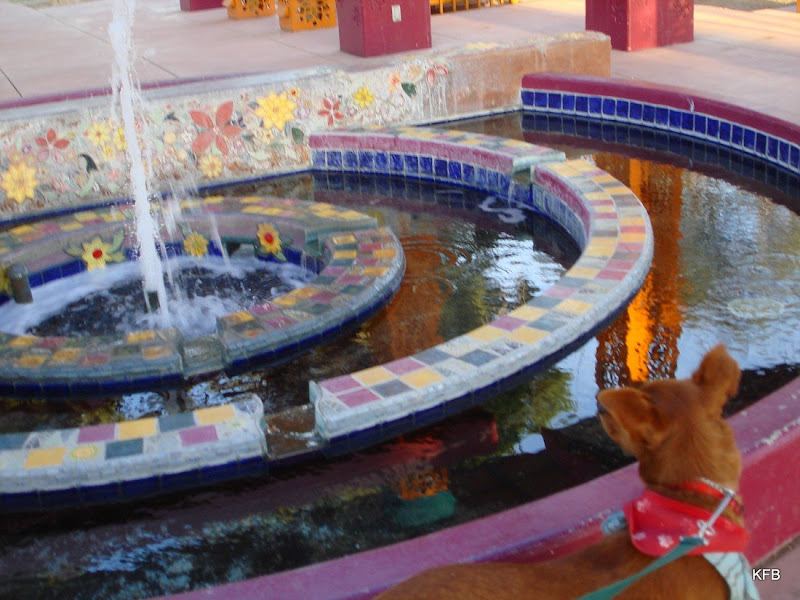 After the duck pond we visited the Cancer Survivors' Plaza, which is where this fountain is. Notice the colors reflected in the water. That's also a light effect. 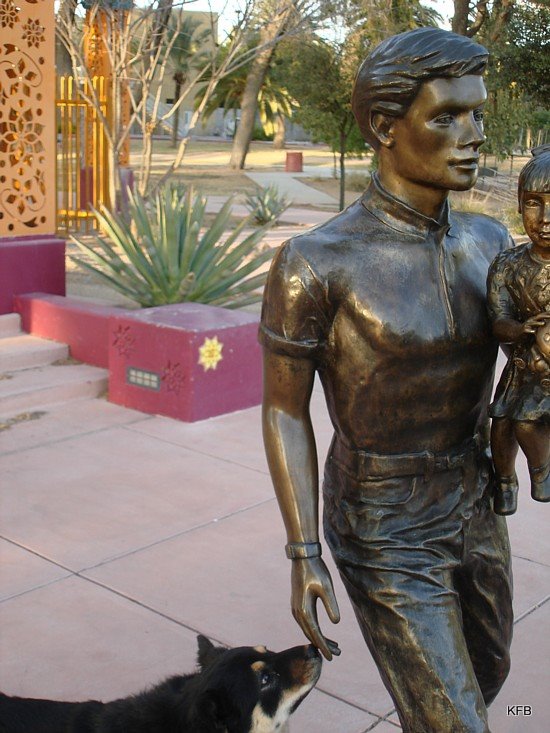 Pepper checks out one of the figures in the Cancer Survivors' Plaza installation. I'll do a whole entry on this local landmark soon. For now, notice the light shining on the man's shoulder. 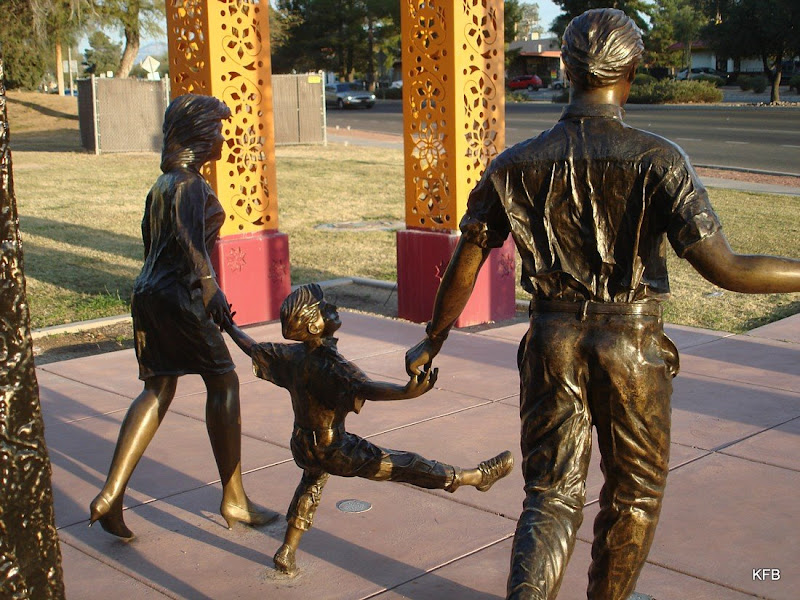 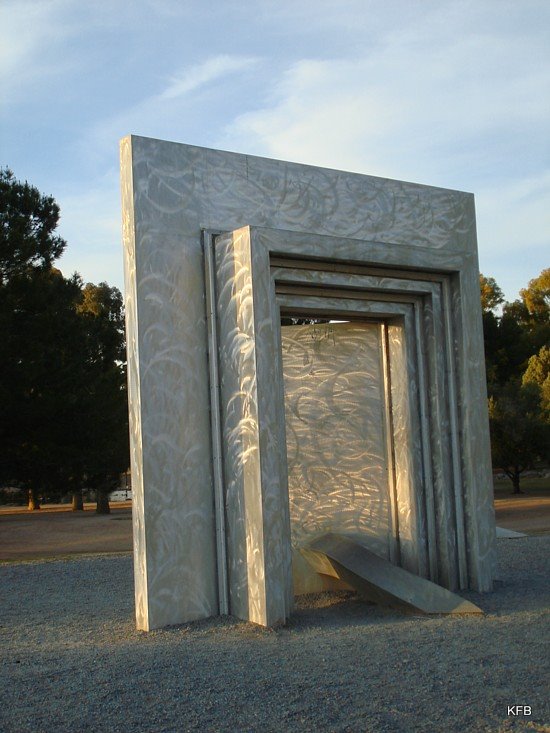 The ground was in shadow as we passed the doorway sculpture on the way back, but I love the way the light that remained was shining on the "door" itself. 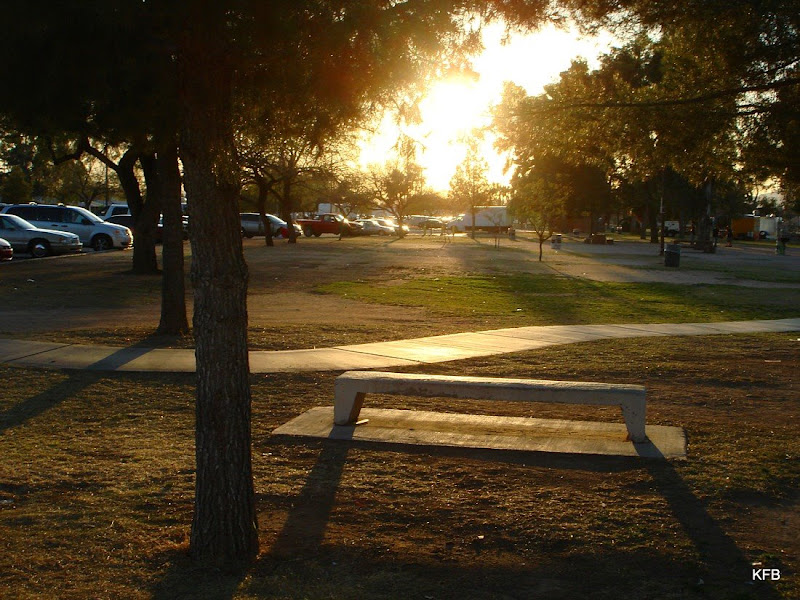 By the time we returned to the car it was clear that the light of the sun would soon move beyond the horizon. Meanwhile, it was time to go to the dog park! We could have walked there, but we didn't. 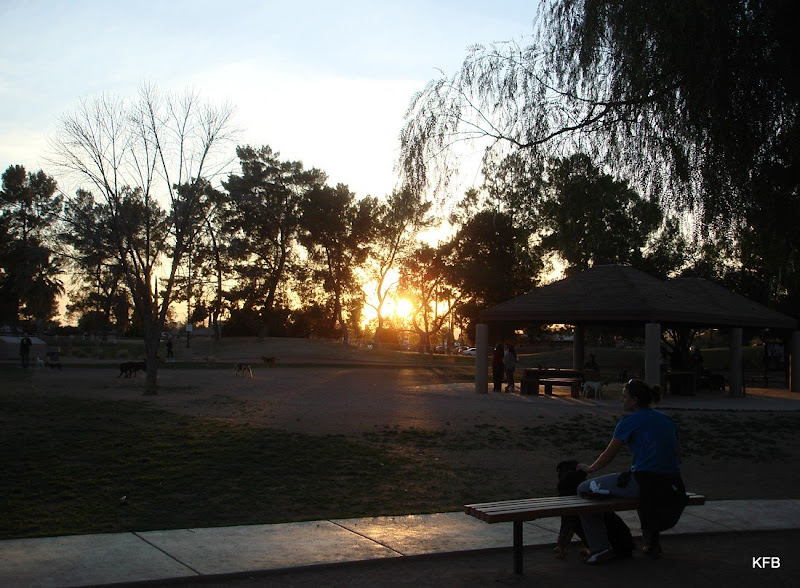 Sunset at Miko's Corner was imminent when we arrived. We stayed for a shorter time than usual and left right at sunset. I took the dogs to the car...and that's when I saw the horses. Not to mention the mule!

It turned out that some white tents I'd noticed earlier were being set up for some kind of animal rescue fair the next morning. I took Cayenne and Pepper to see the mule and some horses, but they barely seemed to notice. At one point one of the mares moved suddenly, which brought forth a startled bark from Cayenne. Other than that, nothing.

I'll be going to the animal fair when it's properly open, and will report back tomorrow night. In the meantime, let's see what everyone else came up with for the topic Light Moves!

CVPhotographs ***Welcome new member*** - Posted!
Do you see what I see
http://www.chryseisvivienne.webs.com

Mojo - Posted!
Why? What Have You Heard?
http://mojo11.blogspot.com/

This Reid Park is very attracting with so much to see! It is a cameras delight I see why you got so many nice shots.
Thanks for sharing...I would give anything to be there now!!

My entries are posted on my new blog (Visual Dialogues). You're cordially invited to visit. Your input is appreciated.

Great park photos! I always enjoy seeing Reid Park. :) Gosh, I just love the doorway sculpture! Who is the artist? I would like to know more.

What a fun entry you have here. Light, public art, palm trees, I am now relaxed just by viewing it.

I LOVE all the public art you have at that park! It looks like a great place to go with a camera. I really like the tiling at the fountain at the Cancer Survivor Tribute.

On the one photo you mention for us to look at the light on the shoulder and what I noticed is your dog sniffing his hand! :-) Maybe he was wondering why he doesn't smell right?

I really enjoyed your entry, thanks for taking us along.

I especially like your water shots, and the quality of the light reflected off of it. Nice job!

What a wonderful collection of pictures for this theme. I love that you added your dogs. The picture when he sniffs the hand of the statue is so funny !

Some nice photos here. I especially like the reflections in the water, the door and the statues.

great photos! I like how your dogs are included in some of them. The last two are my favorites.
I really like where Pepper is checking out the hand of the statue.

There's a reason sunset (and sunrise) is referred to as the "golden hour" that's just about how long you have to capture the magical quality of the light before it slips away. And it changes drastically by the minute too!

Thanks for the walk through the park! My favorite photo is the second to the last. I like the way the sun is peaking through the trees. Great entries. Many blessings.

The door looks translucent in that photo. Really great shot!