EMPS: Museum of the Red

For Ellipsis Monday Photo Shoot #24: The Color Red, Carly wants to see red stuff. Here at the Museum of the Weird, we have a lot of red things, especially in the kitchen. Trouble is, I've previously shown off quite a bit of it - the vintage barbecue trays in two sizes, the red and white faux 50s-style table and chairs, a red clock or two, and even our red stepstool. So what else have we got? Don't worry - there's plenty!

These first two shots would have been great for the Round Robin Photo Challenge Not of This Season, had I taken them in time: 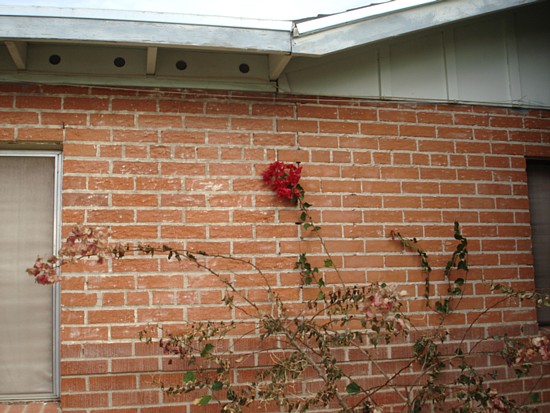 A surviving red bloom against the faded red brick.
In the kitchen, besides the aforementioned furniture and decor, we have a number of red housewares, from china plates to a spatula and a can opener. And how about this? A red dish drain! 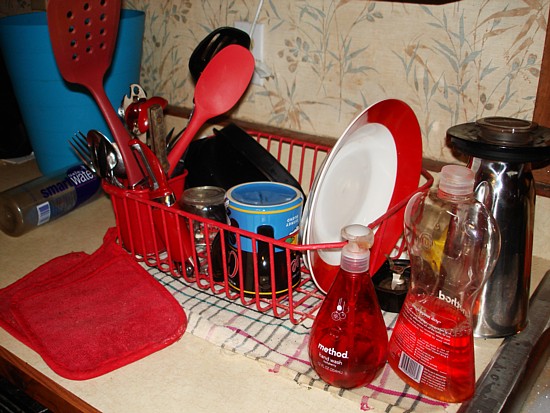 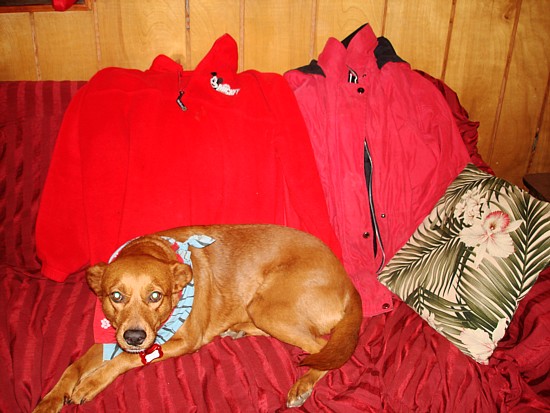 Red dog, red flashing safety tag, red couch throw, red outerwear.
And here's Cayenne, one of whose nicknames is "the Red Dog." (Pepper is, of course, the Black Dog.) She's wearing a red bandana (and a turquoise one), a red collar and a red flashing hang tag. Behind her is my Disney "fleecy thing," which I've had for years and is ideal for Tucson winters, and my red jacket for when it's cold and wet. The jacket is about four years old and slightly faded, but it's redder than the camera and the editing software could render without wrecking the look of the fleecy thing. The couch, of course, is green, but has a red couch throw over it. 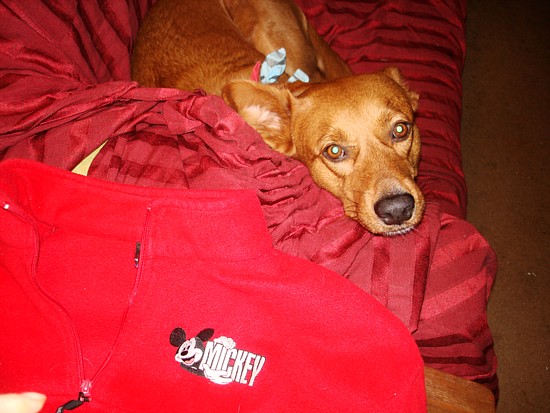 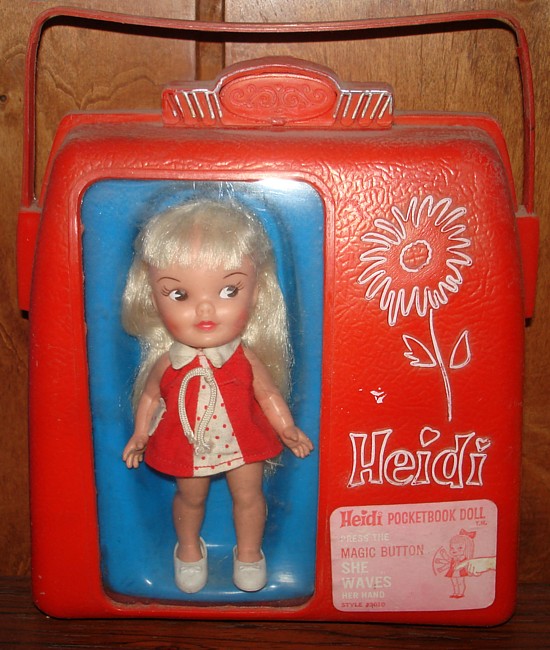 Heidi, the first of the Remco Pocketbook Dolls.
And here's an exhibit from the Museum of the Weird's vintage doll collection. Heidi dates back to about 1962, I think. When I was five or six years old I had Heidi's Japanese doll friend, rather incongruously named Jan. Press the button on each doll's tummy, and the right arm pops up to "wave" hi. I guess that means that Heidi, Jan and Spunky all have "outies." I do not recommend trying this with real friends' belly buttons.

Carly also asked to see non-red Valentine gear. I used to have a Darth Vader kid's valentine that would serve, but instead let's check out a few Safeway offerings: 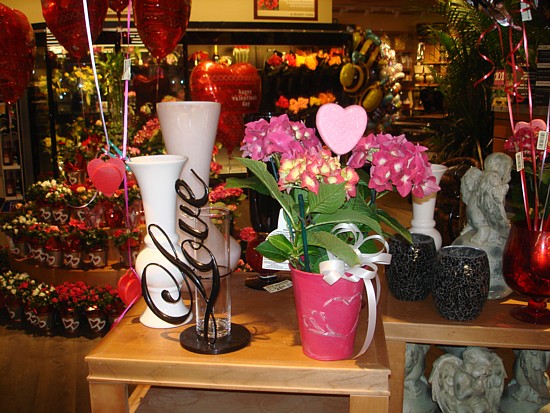 White and grey and black are the new pink and red!
I suppose that pink, which is very prevalent at Valentine's Day, technically contains red, as does violet. But work with me here, and check out the black-and-clear Love vase and the stone-gray Cupids (or, more likely, cherubs).

I've uploaded several more shots that I didn't show here. Click on any photo to get to the EMPS album if you're curious. And be sure to check Carly's blog Ellipsis every week for the Ellipsis Monday Photo Shoot, with links to the previous week's participants!

P.S. It's raining rather hard as I type this, and the wind was blowing earlier. The weather service is predicting snow by morning! If it snows in the city of Tucson for the first time in just over two years, I'll have photos for you tomorrow night!

Thank you Karen Funk Blocher,pretty cute collectibles besides the barbie and dog.Wish you n all in advance a great joyful Valentine's Day.

I am not sure why, but I have had a very difficult time trying to leave you a comment. I have been trying all day... strange.

Anyway, the Museum of the Weird never lets me down. Wonderful collection of red items, especially the red dog, which is who I was thinking of when I suggested a red dog would be perfect! I am now going to have to come up with a black dog entry for Pepper. Fair is fair. :)

You sure have a lot of reds in your house, Karen! I love that red spatula and the dish drainer! your favorite colour must be red?

I enjoyed your reds Karen.

I like your red stuff. Especially the red dog. She seems like a real sweetie. And pink would seem to me to be not red -- that's what I used, anyway. LOL! But getting gray and black in there was doing a lot of extra credit.

Love the Museum of the Weird. Looks like a fun place to visit.

That is a lot of ed! Love all the words tht helped us understand it all.

Hey, I have the same spatula thingy! You have a lot of red, that's good, it's my favorite color. :)