Last night in my initial response to the Ellipsis Monday Photo Shoot, I lamented my lack of really good bird photos taken with a digital camera. Tonight I'll show you why I say this. Back in 1986, we took a number of decent bird photos with regular SLR cameras, which I've so far failed to top with a digital. Here are some of those decades-old photos, scanned and edited.

Southeastern Arizona is a major birdwatching destination, a top birding "hot spot" because of the many species that live here or come through seasonally. This is partly because of its proximity to Mexico, partly because the "sky islands" of mountains provide a variety of habitats in addition to the desert floor and the occasional riparian (riverside) habitat down below.


I'm not sure whether this first shot was taken at the back of our property at our old house on Grannen Rd. here in Tucson, or somewhere on Mount Lemmon. Curve-billed Thrashers are relatives of the mockingbird, with almost as much variation in their song. I've always been fond of them. 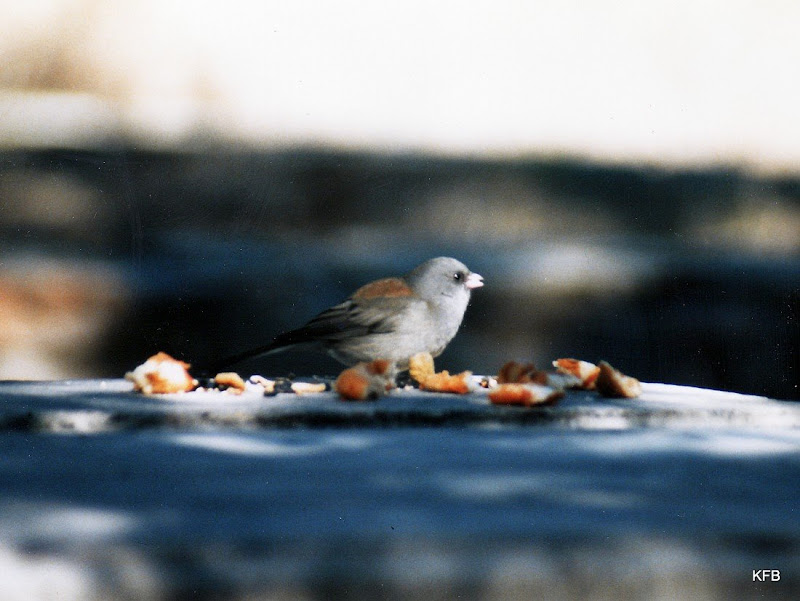 Dark-eyed Junco, Molino Basin.
There are two kinds of junco on Mount Lemmon, the dark-eyed and yellow-yed ones. The yellow-eyed are at the top of the mountains, while the dark-eyed appear lower down as well as higher up. Molino Basin is a picnic area a relatively short distance up Mt. Lemmon Highway. By the way, when I say Mount Lemmon, I'm using the local shorthand for "Santa Catalina Mountains." From a distance, people around here talk about "the Catalinas," but if they actually drive up there, they talk about going "up Mount Lemmon." 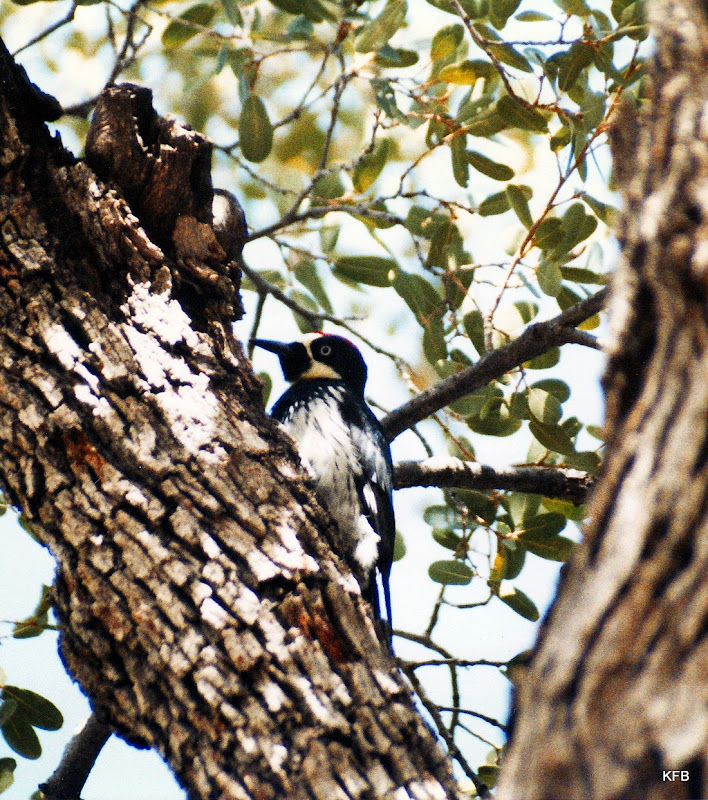 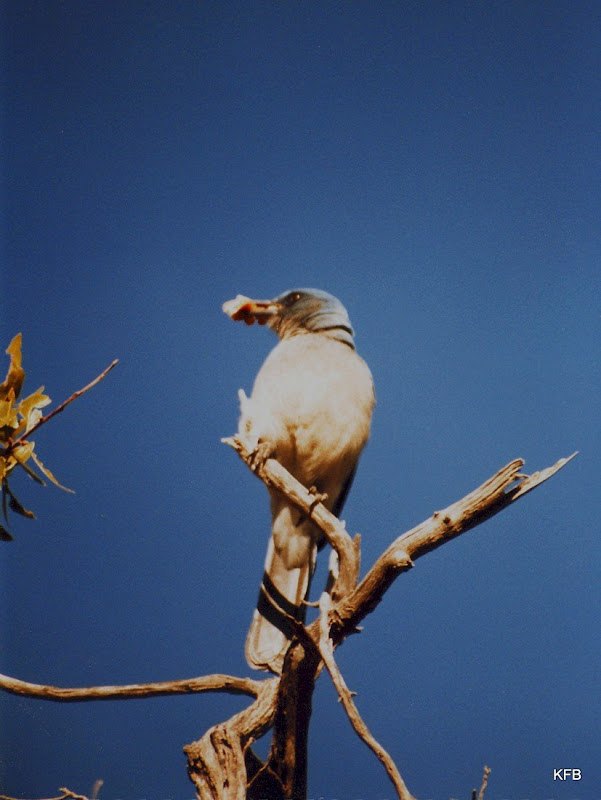 Scrub Jay, somewhere on Mt. Lemmon.
As with the juncos, Mt. Lemmon boasts different kinds of jays, depending on the elevation. The common ones lower down are the Pinyon Jay and the Scrub Jay, and at the very top, if you're lucky, you can see a Stellar's Jay. The Stellar's Jay looks the most like the Blue Jay you see back East. There are no Blue Jays here, only jays that are blue. 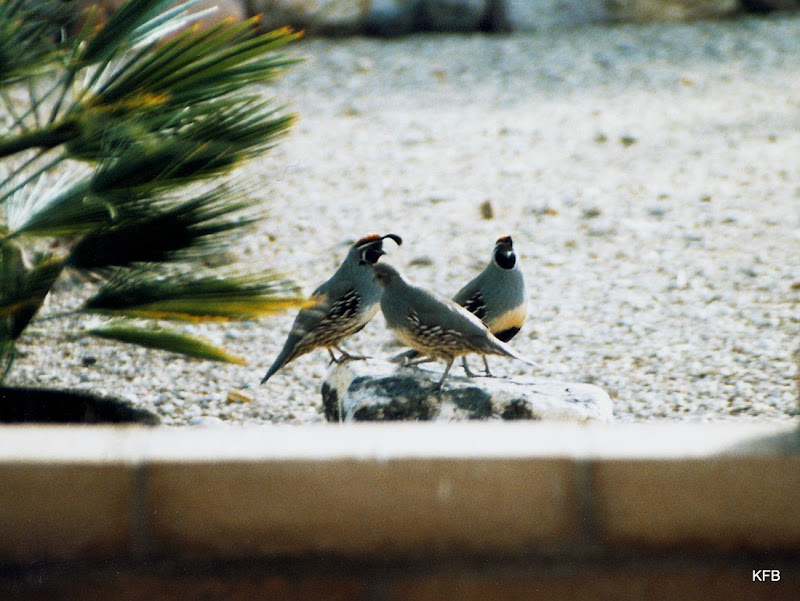 Gambel's Quail (2 male and 1 female), Grannen Rd.
Returning back down the mountains and into our long-lost bird sanctuary of a back yard, we have a few shots involving Gambel's Quail. The female is the one without the dark face. It is fun to see whole families or flocks of quail scoot by on the ground. 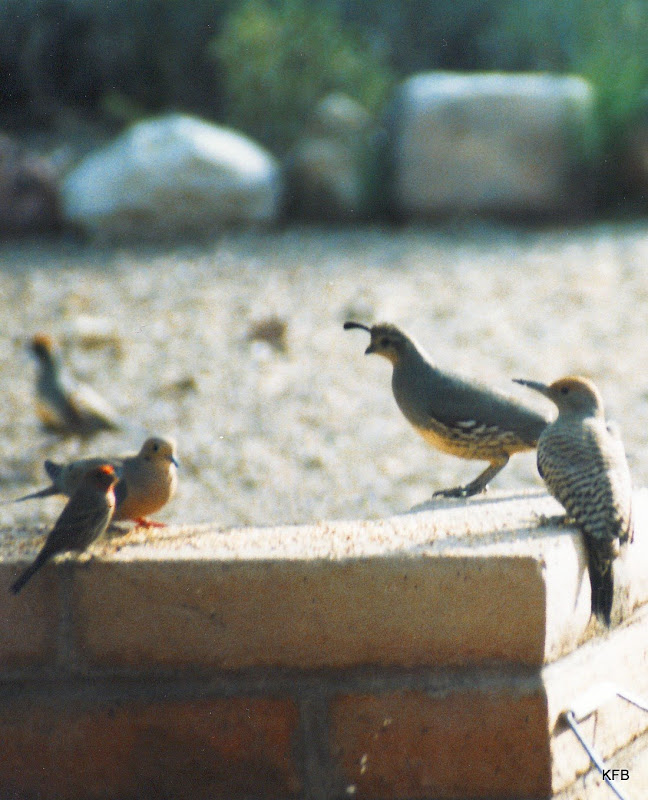 Clockwise from top left: male Gambel's Quail, female Gambel's Quail,
Gila Woodpecker, House Finch, Mourning Dove.
We had bird feeders behind the house on Grannen, and sometimes scattered seed on the wall as well. So it was not unusual to get a variety of birds hanging out together, waiting for their chance at a meal. 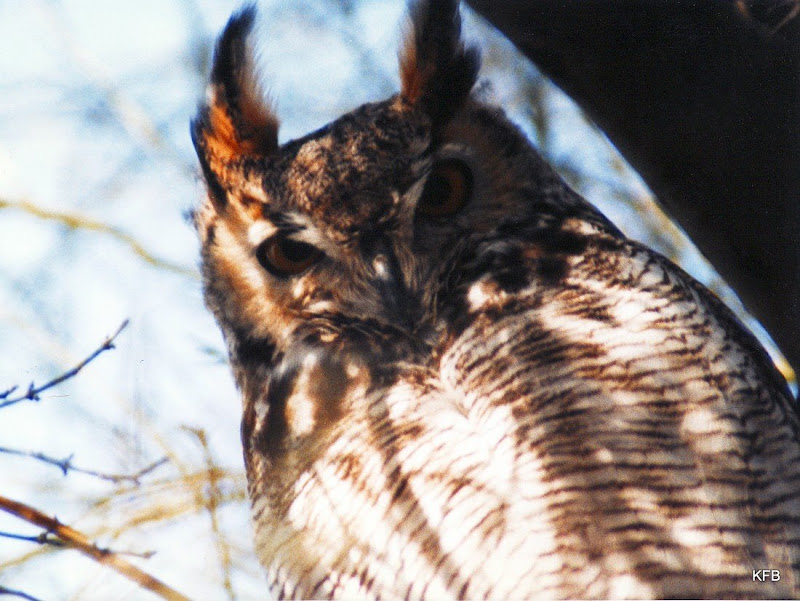 Great Horned Owl, Catalina State Park.
This last shot was almost certainly taken at Catalina State Park northwest of the city. I previously posted a few shots of this guy years ago on my old AOL Journal, and since I'm trying not to post reruns I thought I'd have to skip the owl. But it turned out that I haven't posted this one before. Once I lightened the shsadow a bit, it became my favorite of the lot.

All of these plus the old scans from 2004 or so are posted on a new Picasa album, most of them in a larger size than you see here. Click on any photo to get there and see the rest.

Those are some nice shots. I don't know what I'm going to do about this week's assignment since we don't have many birds around here right now. Can I borrow a few? :)

You got a good collections of bird photos there, for me the most common birds found here are the crows and pidgeons!