Weekend Assignment #257: Giving It Up

I had a topic worked out for this week, and then a vague memory surfaced of a similar discussion months ago. So I'm shelving that idea for further research and returning to our guest professors for help. This one is from Florinda, and is very timely this week:

Weekend Assignment #257: Have you ever given up anything for Lent - and if you have, what was it? Did you make it stick for the whole forty days? (In deference to those of you who have never observed Lent at all, let's expand this to giving up anything for religious, ethical or health reasons - cigarettes, for example.)

Have you ever given up eating meat, either as a fast observance or as an ongoing change?

Over the years I've tried to give up chocolate for Lent, or ice cream, or anything from a snack box or food machines at work (wherever I was at the time), or high carb foods in general, or just generally tried to lose weight. I've also tried giving up late nights at the computer. (Ha!) Do you see a pattern developing? I tried to use Lent as an excuse for trying to take better care of my own health. To some extent that's a valid idea. We should be good stewards of our own bodies. But when Lent is basically the same thing as a New Year's resolution, it's got little more chance of success than those have. Giving up for Lent has two advantages, though. It's for a finite period of time, and in theory you can keep yourself in line with the idea that if you eat that ice cream bar, you're letting God down!

I know there have been times when I managed to at least cut back on the chocolate or whatever it was, but I don't recall ever completely avoiding a forbidden food for nearly two months leading up to Easter (40 days plus Sundays is how it's calculated).

Even so, I did once manage for quit something cold turkey as Lent began, and never went back to it. What was it? This: 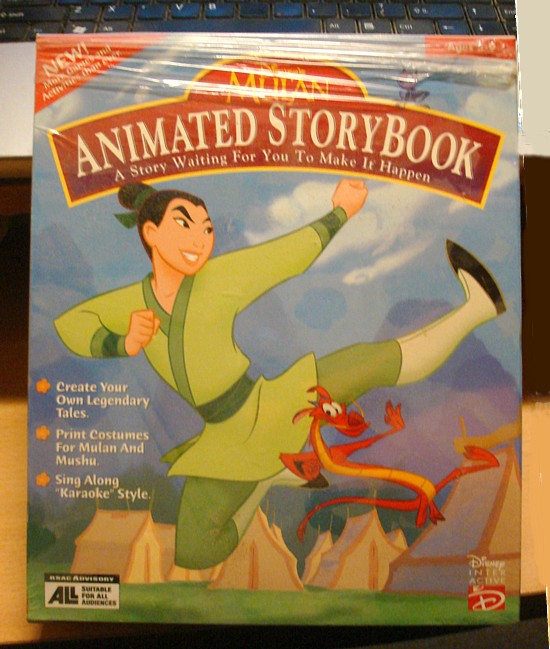 A children's computer game? What?

Well, I was a big fan of the Disney movie Mulan, and among my gifts that Christmas were a limited edition Mulan fashion doll and this suite of Mulan-themed computer games. Most of them had extremely limited appeal for a childless woman in her early forties, but there was one game that appealed to my serially-addictive personality. Can you spot it? 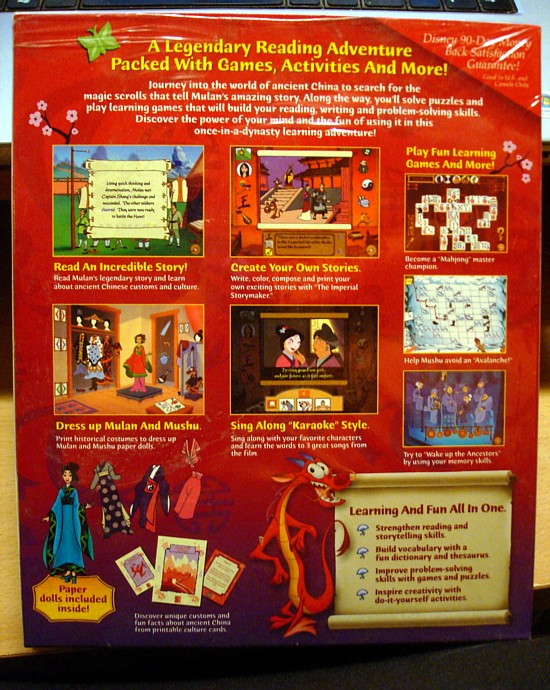 Did you spot it, the real adult-friendly game hidden in the kids' stuff? Perhaps this will help! 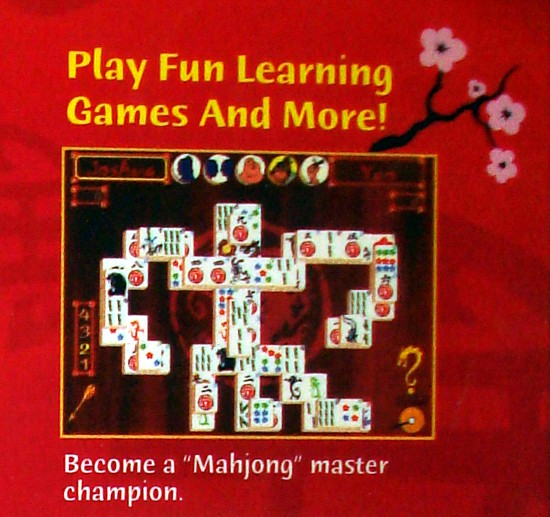 I had never played mah-jong before, but the computer version was simple to learn, and so much semi-mindless fun that I was soon playing it for hours every night, much as some people play card games on their computers at work - or used to, until greater temptations came along. So giving up computer games for Lent that year - no Muln mah-jong, no computer Monopoly - was a big doing-what's-good-for-me sacrifice to make. And for once, it worked!

As for giving up meat, for Fridays in Lent or any other time, I'm really not all that good at it. If it's Ash Wednesday or a Friday in Lent and if I remember, I may forgo meat as leniently defined by the Church, meaning animals that don't come out of the sea. For Ash Wednesday this year, I managed it, although I had to drive around a bit, because I had my heart set on a shrimp or fish sandwich after church, and Popeye's was completely out of shrimp. Ever hear of Lent, you guys? Anyway, I can't imagine giving up meat completely, but I applaud those who do so.

How about you? Have you tried to give something up before, either temporarily or for the long haul How did that work out for you? Tell us about it in your blog, with a link back to this entry, and leave a link to your entry in the comments below. I'll be back in a week to post the results. Meanwhile...

For Weekend Assignment #256: Is It Tax Time Yet? I asked you about your tax filing habits. Here are excerpts from the responses:

So, this is a topic with which I am intimately familiar. My husband is a lawyer and accountant specializing in small business law in the Russian community in Brooklyn, NY. As a result of this, I am basically single between February and April 15th every year, which is why I am keeping myself busy by taking so many classes this semester. One of the few bonuses is that all I have to do is sign the returns. We generally do our taxes fairly early because past years have proven that if we wait, he becomes overwhelmed with work for clients.

We had planned to get to work on our taxes this weekend, but as plans often do, it fell through, partly due to the somewhat more urgent matter of replacing Tall Paul's car. We're not usually in a real rush to get our taxes done anyway, since we are in the unfortunate subcategory of "have to pay" on our Federal taxes. And even if we don't owe the state of California any additional taxes, they'll owe us; they'll be issuing IOUs instead of refunds.

Let me start by saying we don't do our own taxes. I know that there is software out there that makes it so easy a child could do it, but I know I'll mess up something. I don't want to go to jail. I'm too fragile. Either that, or I'll end up missing out on some good exemptions. We all need every exemption we can get.

I always prepare our taxes and do so manually. As I mentioned above, I have experience with both TurboTax and TaxCut, for me it is just easier and cheaper to file manually. It took me an hour and twenty minutes to complete both returns. I did use the amt calculator on the irs.gov web site to make sure I didn’t owe AMT. Wisconsin is offering free electronic tax filing this year, but I didn't take advantage of it.

That's it for now! Remember, I'm always looking for Weekend Assignment topics, so don't be shy!

I decided I'd better do this before I got busy with my day, or I'd forget: http://www.barrettmanor.com/julie/archive.aspx?ID=2489

I probably miss Boston Creme donuts, oreos, and Thin Mints the most...
http://ytbn.blogspot.com/2009/02/in-response-to-weekend-assignment-at.html

but not being so exhausted all the time is worth it.

Thanks for picking one of my topics again. I'm giving up the same thing I do every year, but can't bring myself to give up chocolate :-).

I could see getting suck into Mahjong. How many of us got addicted to Tetris!

Anyway, here is what I'm giving up.