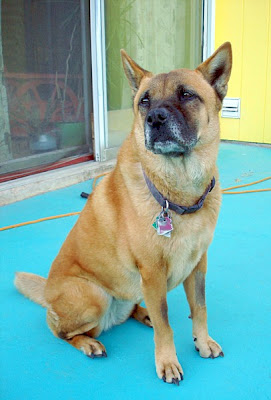 "We demand rigidly defined areas of doubt and uncertainty!" ~ Vroomfondel,
--The Hitchhiker's Guide to the Galaxy by Douglas Adams
Yeah, well, I would benefit greatly about now from just the opposite. That's exactly what's wrong with the science of medicine. Sure, there are some things doctors can do that are fairly straightforward - set the bone, write the prescription, look at the ultrasound. Other times, though, there are no clear answers to be had, only a set of alternatives with uncertain outcomes.

Tuffy went to the doctor today. 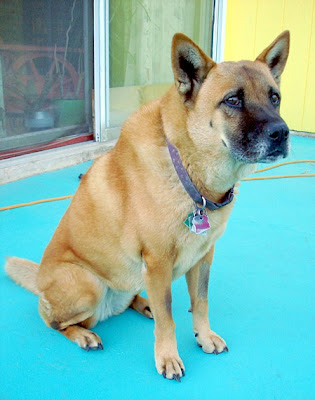 She's lost two pounds since her surgery - not terrible, but it supports the fact that her appetite has been problematic. But that's not the main problem. As I said before, they didn't get all the cancer removed from her tongue. There's still some on the remainder, at the microscopic level.

The alternatives presented to us were as follows:
You see our problem? Our choices are to maim her, to go into horrible debt, or not to cure her at all. There are no good alternatives, only an array of horrible, expensive ones or cheaper, ineffective ones.

We're leaning toward the surgery, because we can come up with another $2k if we have to, and it might actually work. But we're deeply worried about the tongue function and horrified about the feeding tube. The two vets think she'll probably cope and learn to eat again, but they can't promise it. Dr. K. barely gave any indication which scenario she'd recommend: the surgery, because it's the most effective against the cancer itself.

What would you do, if you were us?

We faced many of these same choices when our DK (cat) was diagnosed. Unfortunately for us none of the things would 'cure' her as her cancer had already moved into her lungs (and possibly other places). Because we couldn't 'cure' her we opted for the making her as comfortable as possible route.

I think the surgery would probably be your best shot it sounds like it would get it all... especially if the Dr has had good luck with the rehab portion. Poor Tuffy... No matter what you choose the poor thing faces more treatments.

Good luck.. and good thought being held for poor Tuffy.

With all the trauma Tuffy has already gone through, I think I'd opt for #5 and hope for the best.

My heart not only goes out to Tuffy, but to the both of you. This is not an easy decision to make. As if you need to hear that from ME. ;-)

I'm gonna send you an e-mail on this one 'cause (as usual) there's a story to to along with my reasoning. Bottom line: Do your research before you make any decision.

All things considered I think I would go with #5.
I'll be praying for all 3 of you.
Barbara

Ah, poor Tuffy. I know from experience how hard it is to make these decisions for ailing and elderly companions. If it were me, I'd consider either the surgery, if a cure seemed possible. Otherwise, I'd make her as comfortable and pampered as possible for her remaining time.

Good thoughts and love to you all.
Vicki

You have left one option off that list. Not that I'm advocating that one, but, you know...