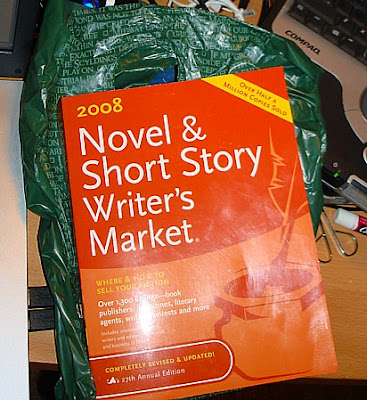 Necessity? Depends on whether I get the same info online.
Your Monday Photo Shoot: Take a picture of something nice/fun/interesting that you recently bought for yourself. That means something you bought because you said to yourself "hey, that would be nice to have," as opposed to, say "hey, this is something I have to get." So, for example, that package of tube socks that you just bought would not qualify for photo shoot -- but a pair of multicolored knee-high socks with kittens on them would. It's all about the delivery, you see.

Well, I bought a few hours of a veterinary surgeon's time today. Does that count? 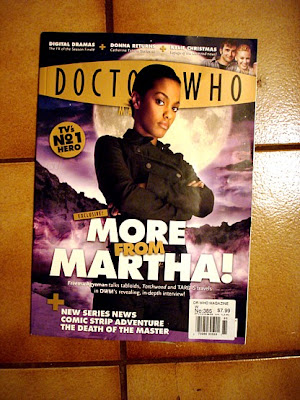 Self-indulgent, but totally worth it.
What with Tuffy's recent $1035 operation to remove three benign cysts, followed by today's estimated $1700 cancer operation (including tests and related services), this has not been an ideal time to be self-indulgent in buying things. But I'll show you a few things anyway.

As I've mentioned at least once, I did buy the 2008 Novel & Short Story Writer's Market last week, mostly to track down agents. (The one I want to try next is probably aiming too high, but I'm going to contact him anyway, so there.) Is this a "have to get" or a "want to have?" Probably the former, but it could be argued that I've bought plenty of Writer's Markets and such over the years that did not result in a single query, and were therefore indulgences rather than necessities. Shame on me, not putting them to their full use.

The Doctor Who Magazine fully qualifies, though. I don't have to have it. but I wanted it badly enhough to make two trips to Borders just to buy a copy. (The first time, on a Sunday evening, Borders was already closed.) Imported from the UK, it's a rather expensive magazine, but I thoroughly enjoy it. 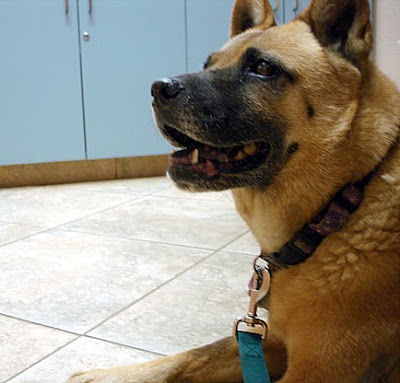 Tuffy in the oncologist's office.
The big purchase of the day was Tuffy's cancer operation. The oncologist thought, from what she could see as Tuffy panted, that the tongue was operable, and a physical exam showed no obvious signs that the cancer had spread. The next steps were a few X-rays, maybe another test or so, and an examination by the surgeon under anesthesia. The surgeon said that once she was in there, if it was operable, the best thing would be to go ahead and "resection" the tongue, then and there. So we said yes, they did the estimate (not as high as we feared, but it means charging up a card that has a zero balance right now), and we left Tuffy there. That was about 12:30 PM. The surgeon called around 4 PM for the go-ahead to do the operation, and she finished around 5:30. The tongue will bend to the left but still function, she says. Tuffy stays overnight so they can keep an eye out for bleeding and complications, and then I bring her home sometime tomorrow. The wedge of excised tongue (I know, it give me the willies, too!) goes to a pathologist to confirm that they got it all. And that should be that. Had she needed radiation instead, it would have cost around $5,000, with a much worse prognosis - and I'm not at all sure we'd have gone for that. As it is, it looks to be the best possible outcome, if she had to have cancer at all.

John said, "But she's just a little dog! She can't possibly understand what's going on." But we know. We almost certainly just bought her several more years of a decent life with us. 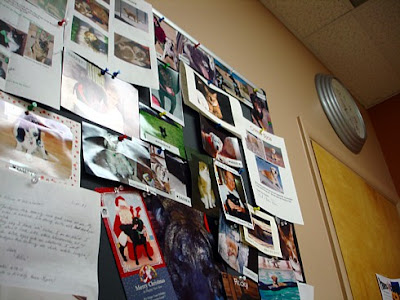 Canine and feline testimonials
The exam room we filled with pictures of past patients, sometimes with a thank you for saving a pet's life, at least once with a thank you to the oncologist and her colleagues for doing her best for a dog that died. Overall, though, it was full of happy photos of dogs and cats, and it was fun seeing the variety of breeds and reading some of the names aloud as we waited. 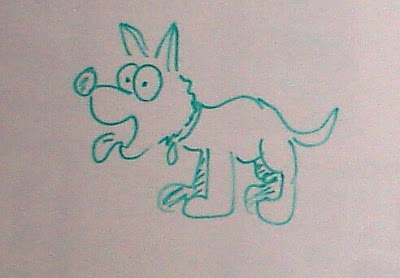 This was the only thing on the room's whiteboard.
Thanks, everyone, for your support and prayers and such during Tuffy's health crisis. I really appreciate it.

Glad to hear the encouraging news on Tuffy.

Equally glad to hear that you're aiming high on agents. Of course, it's a great idea! ;-)

Wonderful news about Tuffy! And, as for aiming high with the literary agent? Why not shoot for the stars, you never know, you might hit one! ;)