I'm going to keep this short tonight, because I'm feeling just a little unwell and really, really need to go to bed, and I have no immediate ideas for a more ambitious entry anyway. Staying up waiting for inspiration is counterproductive when I'm this tired. So I'm just going to tell you a little story about my surprising connection to an odd combination of words I first heard in Doctor Who's season finale several months ago; "cold mashed swede." What? What? What?

In the episode, Captain Jack Harkness is chained up by his wrists on a flying aircraft carrier, and spoon fed by Martha's sister, Tish Jones. Jack expresses a yen for fish and chips, but notes that instead he's getting "cold mashed swede." The first time I saw the episode, I thought I must have misheard. What in the world was cold mashed swede? 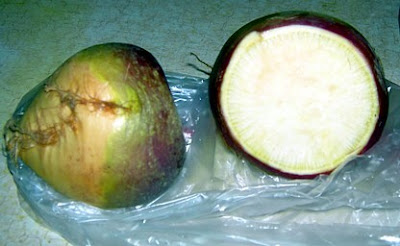 It took a few months before I got around to Googling the answer. Swede, it turns out, is the British name for what Americans call a rutabaga, a root vegetable related to the turnip. Oh! So Captain Jack was having mashed rutabagas. Gee! Amazing!

Here's why this is amazing, and here's why I care. Rutabagas are, as far as I can tell, a fairly obscure vegetable in this country. They are usually available at Safeway when I think to look for them, but not in vast quantities. I seldom (if ever) hear of anyone eating them in the course of an average week. I grant you it's not a subject I normally bring up in conversation, but still, I never see it on a restaurant menu, for example. Yet it's a vegetable I grew up with, and still try to have once or twice a year, at Thanksgiving and Christmas. We called them turnips, until I learned the proper name in my teens. But in the UK, I gather from the recipes and such I saw online, it's not all that obscure, just seasonal. (If I'm mistaken about this, I hope a reader from the UK will correct me.) And it has a different name, which I would probably never have learned were it not for Captain Jack.

In the Funk household all those years ago, mashed rutabagas were part of the turkey dinner, along with mashed potatoes, giblet gravy, bread stuffing with sausage and raisins, and cranberry sauce. Rutabagas are great when mashed with milk and butter, salt and pepper, and topped with gravy. They're even better the next day, mixed with the leftover mashed potatoes into what we used to call turpatoes.

John doesn't care for rutabagas, and normally it doesn't occur to me to buy them except on those two specific holidays. But having recently learned about that exotic, politically incorrect alternate name for them, I bought a rutabaga last night and cooked it tonight. John was working late due to a last-minute editing emergency, so I boiled/steamed my rutabaga and served it with a frozen turkey entree. Thanksgiving dinner it wasn't, but I enjoyed it.

And yes, there were leftovers, and yes, I ate them cold.

Email ThisBlogThis!Share to TwitterShare to FacebookShare to Pinterest
Labels: Doctor Who, rutabagas

Well, they say you learn something new every day. I don't know about that, but today holds true, anyway. Years ago, my mother used to serve "turnip" quite regularly. I hated it. Rutabaga was something with a funny sounding name I had never seen before. Now, upon reading this entry, and doing a little research, I find that my mother, all those years ago, was almost certainly, unbeknownst to her, serving rutabaga. And I have never actually seen or tasted turnip. It's a funny world, isn't it?

oh i love Rutabaga! When not served at the "proper holidays" I use it in chicken veg. soup! And now and then as a veggie..the only problem with it is peeling off the waxy skin! Man, you have to be strong! lol

When my brother and I were young my mother would mash Rutabaga and mix it with mashed potatoes, because my brother didn't like the Rutababa...he'd say, "the 'taters taste funny".. she told him "they are NY potatoes".. then he ate them lol