Weekend Assignment #189: Amuse me, damn it! Yeah, that's right. You amuse me for a change. Tell me a joke. Tell me a story. Show me a funny picture. point to a good online video game. Suggest a good book or movie. Link me to a diverting YouTube or AOL Video, like those soda/Mentos fountain things (but not that, I've already seen those). Anything, people, just as long as it's amusing. You know, something you think I would like. Like what, you say? Well, you know. Surprise me.

Extra credit: Share your favorite pun. I love me a good pun.

Well, heck, John. I like to think that this blog amuses you on a regular basis; that's certainly one of my aims. I figure if I can give you a chuckle, my other intelligent, tech-savvy, fun-loving readers will probably be amused as well. Also, I've seen enough of your work to have some idea what you're likely to enjoy, and what your readers enjoy. It's win-win!

That said, I'm going to pander to you tonight to an unprecedented degree. I proudly present: John Scalzi's Fabulous Future Fantasy! Click on the images for larger, clearer versions. 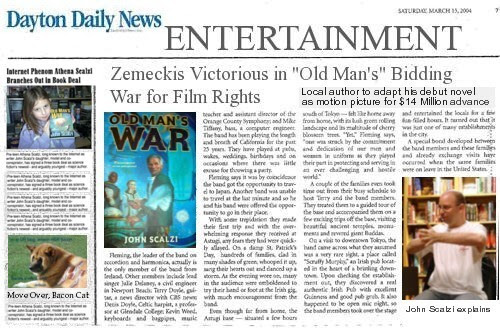 Steps on the road to fame and fortune for the Scalzis.
So, John, who would you like to see as the director of Old Man's War when it becomes a major motion picture? I've selected Robert Zemeckis; is that okay? And if $14,000,000.00 isn't enough to adapt your own book as a screenplay, remember that this is just the advance.

Meanwhile, it's just a matter of time before Athena parlays Internet fame into dead-tree fame. 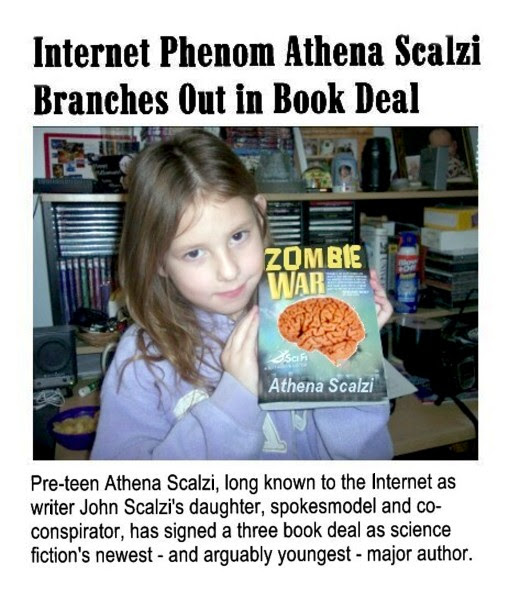 Soon Athena will be promoting her own book, not yours.
And as a sidebar, Kodi just set off a whole new Internet craze of attaching things to dogs. 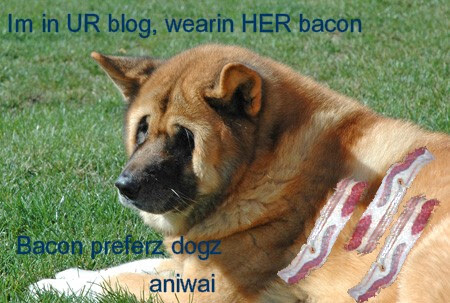 In Ohio, the bacon fries you! Or not.
Kodi isn't the only member of the Scalzi household who likes bacon, of course. Accordingly, the following news should be very welcome. Well, maybe: 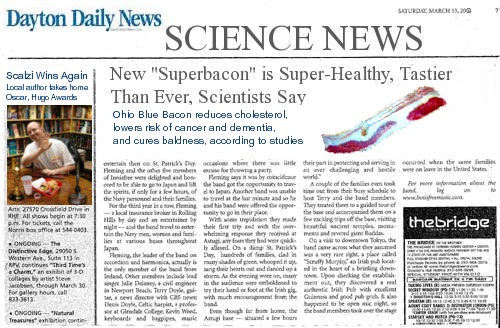 Ohio, home of the fabulous bacon breakthrough!
Will it enhance your life or diminish it, John, if it ceases to be a guilty pleasure? No matter, because in the other article in this section, oddly classified as Science News, is photographic evidence of your amazing weekend in some future September: 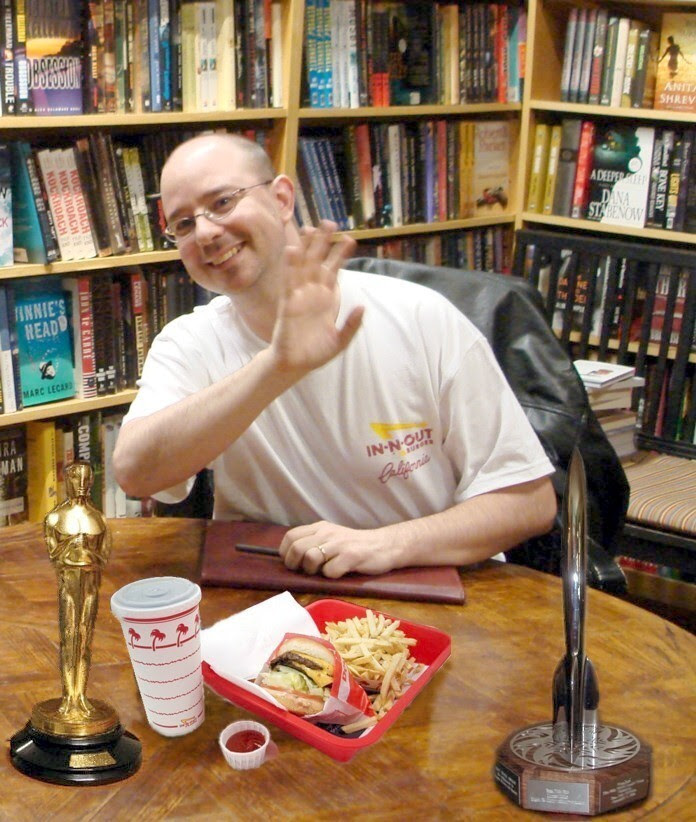 The multi-award winner enjoys a meal as he greets his fans.
What's this I see? A Hugo and an Oscar? Why, yes! Both get handed out in early September. Looks as though you've had a heck of a week! A Stoker and a Nebula would be yours to win at other times of the year. But if you want them...!

I see you're still less than hirsute, however. Clearly, you need to eat more Ohio Blue Bacon. (I should have made it Bradford Blue Bacon. More alliterative!)

And now, words of wisdom from the Seventh Doctor, as made up by myself years and years ago:

A bird in the hand is a bird enlightened.

(Pictures of Kodi, Athena and bacon by John Scalzi, used and edited with permission. Newspaper headline generators found at addletters.com and http://www.signgenerator.org/. Dayton Daily News masthead used without permission, but I doubt they'll mind. Hugo and Oscar awards images used without permission - low res and should constitute fair use. All other photos by Karen Funk Blocher. So there!)

*giggle* I think John will get a kick out of this. But I think Speilberg is the wrong fit for OMW. I think Roland Emmerich or John McTiernan. Ooo! Or James Cameron. Yeah. Any one of them has a much better grasp of how to handle a battle sequence with true grit. Speilberg is too...soft. KWIM?

What a fun and creative entry. :) I think Robert Zemeckis would be an excellent choice for director. :) This entry is just fun, start to finish.

Well it certainly entertained me! I'm sitting here thinking, she spent a lot of time putting this entry together... I spent too long just putting yesterday's entry about my NCCAT experience together...what with uploading pictures and making two movies for the uncut videos I posted, and the one I will post today if it was successful. And now this assignment. I'm going to have to pass on this one... yours is stand alone entertainment! Loved the modified photos. Where do you do that? Maybe something for me to look into... on another day (grin). Thanks. Bea