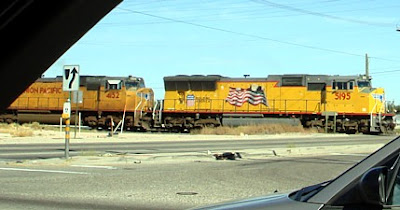 Engine, Engine, Number 3195....
It would be too much to say that when it comes to photography, I do everything wrong; but I certainly have my shortcuts and bad habits. The main one is this: I'm a drive-by photographer. I seldom drive to a place, park, get out, find the perfect vantage point, choose my camera settings and line up my shot. No, no. Instead, I drive past the desired photographic subject with the car windows open. If there's a red light and I can stop, great. But even if I can't, I'll probably still try for the picture. Keeping my eyes on the road, mostly, and definitely not the viewfinder, I'll point the camera out the window at what I hope is the right moment, press the button, and drive away.

Okay, so it's less than ideal. It's impossible, for example, to edit the photo above so that both engines are in the shot, and the two cars (mine's interior, another's exterior) don't frame it. On the other hand, the only way to get a better picture would be to get off work earlier, find a place to park, and wait for the train to come by. I'm not sure there is a good place to try for the photo, at least, not without being delayed for twenty minutes on the wrong side of the tracks! 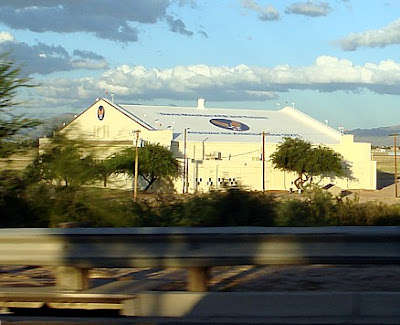 I pass it every day, but I can't get there.
Here's another shot I've been trying for off and on for a couple of weeks. This building is at David-Monthan Air Force Base. I've always thought it was an aircraft hanger, but really, I've no idea. It's visible from Alvernon Road near Golf Links, but as far as I know the general public can't get anywhere near the building. So I slow down a little, glance at the side mirror, point and hope! The result isn't very good, but otherwise I would have no photo of it at all. 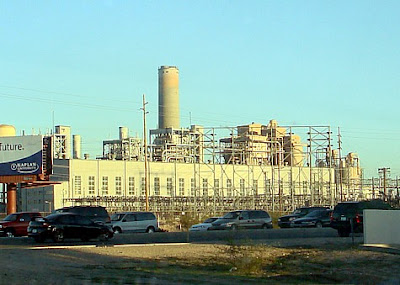 Sometimes I try to do it right, though. This shot of the power station was taken at a red light, but it's probably the best I've got of the structure. Even so, I took time at lunch the next day, and went to see whether I could take a better photo by approaching the building properly, stopping, maybe even getting out of the car. 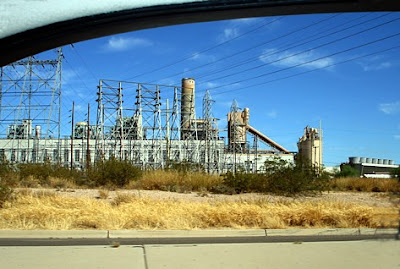 Sail on, oh Ship of Watts!
This was the result. Obviously I didn't get out of the car, but it wouldn't have helped much. By driving in front of the building I was actually too close to get the whole thing in frame. I kind of like the fact that it looks like a steamship, though, perhaps as seen through a porthole.

My boss tells me that it looks entirely different at light, brightly lit and almost magical. I expect I'll have an opportunity to see this as the nights (and my hours) get longer toward year's end. Then maybe I'll take the time to photograph it right.

Meanwhile, I wrote the announcement entry several hours ago for the next Round Robin Photo Challenge. Becky came up with "Other Settings" as the topic. The idea is to try out settings on the camera that one hasn't used before. Ah, heck. I haven't tried half of them. This should be interesting!

Email ThisBlogThis!Share to TwitterShare to FacebookShare to Pinterest
Labels: not recommended, photography, Round Robin Photo