You've probably seen The Sound of Music, yes? Annoyed by the "problem named Maria," the nuns send her to live with the Von Trapp family as a governess. As she walks to the Von Trapp estate, suitcase in hand, Julie Andrews as Maria sings "I Have Confidence," building herself up and showing herself that she isn't afraid. Then she reaches the forbidding gates of her destination, and falters for a moment: "Oh, help!" 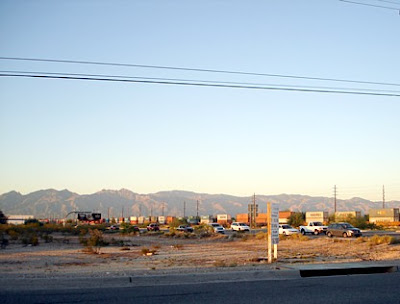 A train at sunset: I think I can, I think I can...
We probably all feel like that sometimes. Myself, I'm in my fourth week at Famous Vehicle Dealer, struggling to learn arcane industry language and the equally arcane reports that use those terms. It's been difficult and kind of scary, and sometimes I've felt a bit stupid for not being able to understand both big picture and details on the basis of a series of brief explanations. I've had to tell myself that it's not reasonable to expect myself to learn an entire industry in a couple of weeks, working almost entirely on my own; that I'm both intelligent enough and dedicated enough to learn what I need to learn; and that my boss is both pleased with my efforts and willing to help. But today I puzzled through the rest of the procedure for putting together this big, complex report, with seven tabs' worth of info from four different sources, and successfully recreated it to match known data. So there! That will do wonders for my confidence: actual proof that I can do it after all. 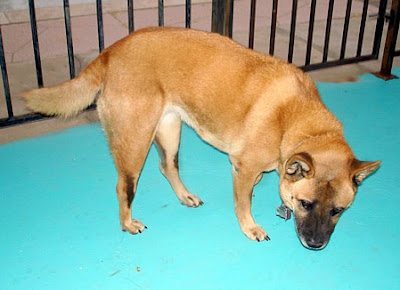 Tuffy hopes to find leftover crumbs of dog biscuit.
And tonight Tuffy ate. In fact, she showed every sign of being ravenous. She won't eat her canned dog food, any flavor, but she had a couple of dog biscuits, and then John cooked up hamburger and eggs for her, and then she pestered me for lamb fat. This dog is just incredibly stubborn about eating something she's bored with! She used to like the canned food and her pieces of cheddar cheese, but she's had them often enough since the two operations that she won't touch them now. Months ago, she was bored with dog biscuits. She'd beg for one only to carry it outside and bury it. But she hasn't been eating hard food because of her tongue, so now it's a novelty again. Darn dog! 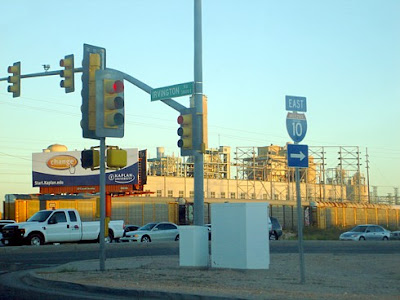 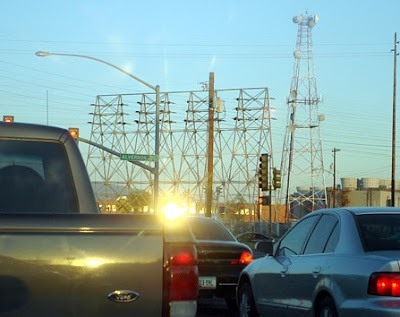 More power!
I happened to be stopped at the light at Alvernon and Irvington just before sunset tonight, and noticed that off to the right was (I assume) a power station. I thought it looked interesting, so here are a few photos. The train (same as the one above, but a day later) arrived just as the light turned green, and between the train moving and my car moving the shot I took of the locomotive was hopelessly blurry. But the power station was nice and station-ary.

I've decided to take it from the top and reedit Heirs of Mâvarin and then Mages of Mâvarin from the beginning, having lost momentum on my ongoing edit since the First Magnus debacle and Tuffy's diagnosis. (Did I mention this already? I can't remember.) Anyway, a couple of nights ago I was obsessing about a twenty (or so) word passage in Heirs. I had suddenly realized that a line of Fayubi's prophecy to Jamek didn't make much sense, and was interrupted by a line that was pretty maudlin. The prophecy was a one-word fix, but I'm still not happy with the sentence about Jamek's reaction. And then tonight I realized that the prophecy still doesn't make logical sense, this time for a different reason. Arrgh.

So there I was tonight, looking over page one of Heirs, and I noticed a bit that I probably wrote nearly twenty years ago - long after high school, but not exactly recently. It starts with Jord Baret saying, "You're crazy, Bil," which suddenly struck me as cliched, forced and too contemporary. Jord would disagree with Bil's relaxed attitude toward tengremen, but those aren't the right words to express that. After considering "Don't be ridiculous," and "You're wrong," and "Don't be stupid," all of which have exactly the same problems as "You're crazy," I ended up with him not insulting Bil at all, but simply stating why he believes Bil is wrong. Yes, better. Now I intend to go through the rest of the book to look for clunkers, fighting to notice every sentence rather than glossing over it because it's so familiar. There must be a reason why DAW thought the book wasn't "truly outstanding," in the words of the form letter, which said they take nothing less from new authors. Maybe the first reader was put off by that sentence, "You're crazy, Bil," Jord said, and other sentences here and there that my eyes slide right over.

I could spend a fortune on the stuff you mentioned and I am older than you are. I hope I never grow up there is so many cool kid things out that wasn't areound when I was a kid.:)
Barbara BeckerB6@aol.com