How Many Kinds of Diet Cola Do I Really Need?

This morning the line at McDonald's was prohibitively long, so I stopped at a nearby Circle K instead. Those two stops, plus unusually backed-up traffic, made me about ten minutes late this morning. But that's not the subject of tonight's rant, so we'll move on to that, briefly, followed by a few annotated pictures.

Anyway, the soda I bought at that Circle K was Diet Coke Plus, the "plus" being vitamins. The thought was to offset my usual sleep deprivation nutritionally as well as with caffeine. It's all right - not great, but all right. I think it may even have helped a little.

Every day I bring one can of diet something to work, and every lunchtime I buy a fountain drink somewhere. In both cases it's almost always some version of diet cola. Yesterday's leftovers get combined with that morning's new stuff, so that my soda is constantly in some intermediate state between fresh and cold and flat and warm. I try to finish what I've got often enough not to let the same molecules of stale soda hang on too long!

I'm actually not very fond of cola, but I want the caffeine. Since fast food places almost never offer any diet soda except Diet Coke or Diet Pepsi, I tend to go for variants at the grocery store. But am I overdoing it a bit? Here's what's in the house at the moment, either as a partial 24-pack or a single can at the end thereof:

We're also finishing up a case of Diet Snapple Ice Tea, which was a variety pack. The best thing in it was Diet "Plum-a-granite." I still miss the non-tea diet Snapples, which seem to have pretty much disappeared. And yes, I have one can of diet root beer left, for evening consumption. 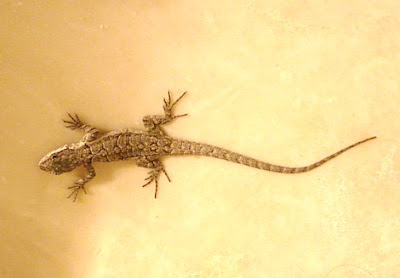 Don't freak out, Carly, but this little lizard visited my bathroom sink the other night. They turn up in the tub occasionally, or on a wall, or on the floor. In the sink he was easy to catch and put outside again. 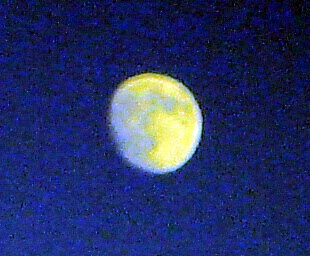 The almost-full moon was in the sky before sunset last night, so I thought I'd see whether a well-lit moon shot would be easier for my camera to handle than a night shot. Answer: no, not really. It just doesn't zoom enough to get decent resolution, let alone give good results without a tripod. But when I hit Autocorrect on the blue sky moon, it darkened things up rather a lot. The result: this fun shot that looks something that looks like the Earth, but isn't!

Hmm! I've never heard of or seen "Jazz" before. Interesting.