It's Not So Easy

Okay, so I didn't do so well with following through on last night's plans.

Church was no problem. Apparently nothing terrible happened as a result of my Saturday night no-show, and i was readily forgiven.

After church, I was overcome with sleep, do to having been up late Saturday night. I slept until 6:30ish.

Next up, I emptied out most of the remaining stuff from the storage space that was still in my car. Hey, it's only been a month!

So far, so good. But the writing didn't go so well. I spent a lot of time today thinking about that Mâvarin prequel story, mostly while doing something else. I'm no longer convinced that it's salvageable at all.

Others have offered all sorts of advice, both today and in response to previous whinings on my part. Write something non-Mâvarin. Write something about an historical figure from Mâvarin's distant past, which has the advantage of not interfering with the events of the novels. Write about Jace or JW. Try this market or that one. Package some existing material. Try to sell a novelette. Get those agent queries out. Give yourself a break; you really have had a tough couple of weeks. And so on. Pretty much all of the suggestions have merit, but the chances of my following them are highly variable.

I've been thinking today of Tolkien and his body of work. We know now that he wrote a lot of Middle Earth material that wasn't especially commercial, that people buy now more for the sake of completion than due to any expectation that it will approach The Lord of the Rings in readability. He also wrote a few things that weren't explicitly set in Middle Earth at all. For some Tolkien scholars and fans, all of it is significant, but I suspect that most people will never develop any strong feelings for anything he wrote that doesn't involve someone named Baggins. Whoever convinced him to concentrate on LotR as a more commercially viable story than The Silmarillion probably deserves our thanks. But if someone ever told him to set aside this Middle Earth stuff and write about something else, that theoretical person was way off base.

This is going to sound arrogant and self-serving, a combination of hubris and rationalizing; but here goes anyway. I'm not the seminal fantasy writer of the 20th century, or even of the 21st. I don't have extensive notes on legendary characters and invented languages arising from "the Northern thing," or a choice between an obscurely written narrative and a conventionally told one, full of vivid characters. Nevertheless, I know what my magnum opus is, the story with the most potential for finding a readership. Everything else I write, at least in the fiction arena, is in service of the saga or Rani and Carli and Cathma and their friends. I hope that people will like my stories of Joshua Wander, Jace Murphy and Sandy Sheets, but they will never be as important to me, or ultimately to the world, as the Mâvarin books. Whatever else I do with my life, my priority will always be to get Heirs and Mages (and probably a few more books in the series) into bookstores and onto as many readers' shelves as possible.

Yet the Mâvarin books will never even get published unless I find a way to build a demand for them, and that's where the other writing comes in. Yes, I should write and sell some other fiction - Mâvarin, non-Mâvarin, maybe both. Problem is, that's not so easy for me. Quite aside from the current crises involving new jobs, sleep schedule issues and Tuffy's cancer, the truth is that I'm not the sort of writer who has a lot of story ideas. I could probably count on two hands the viable story ideas I've had in my entire life to date, and not run out of fingers. Once I'm in a story, yeah, I can write my way into a bunch of scenes that advance the plot; but a new plot about brand new characters is darn near impossible for me. The Joshua Wander stories (one completed serial, one stalled mystery story) arose from a D&D premise I came up with 30 years ago. The Jace Letters is based on a YA idea I had about five years ago, finally given form by the fact that I drove to New Mexico in 2006 to visit my godson. "Later This Somewhere" is currently stalled out, although I've been playing with it in my head today. "Snowflake" is a mere vignette; ditto the few Ficlets I've written, one of which is from a premise nearly 20 years old. There's a disk jockey story I wrote in high school and would never bother with at this point, and there are two stories I wrote at Clarion in 1977 that probably aren't worth reviving. And that's it: my total non-Mâvarin, non-fanfic output of the last 32 years. Pitiful, really.

Plus, of course, there's the fact that I've published nearly all of this material online, which pretty much kills its commercial potential.

It seems to me, though, that I need to overcome such limitations. Even if I don't care that much about Sandy's anachronistic theater, even if I dump the Mâvarin prequel story about Del and Rani - again, even if I haven't the tiniest wisp of an idea for a new story about any new or existing characters, I've got to get on with writing something. It will be good for the writing as a whole to stretch myself, to find a way to generate ideas and develop them, to follow through and write something new and sell it.

Gulp. Can I do that?

Meanwhile I investigated a couple of HTML editors today. The OpenOffice or whatever it's called promptly ruined my Sermons.html document, replacing iframe coding from Hipcast with links to a file on my hard drive. Arachnophilia looked pretty good, but didn't appear to have a preview mode, or much by way or documentation. The current version of Composer seems to be available only as part of SeaMonkey or somesuch from Mozilla, and I couldn't find the Google one, unless it was the thing in GoogleLabs that wouldn't let me proceed without signing up for gmail. And speaking of online mail servers, is there a way to save my AOL webmail to my hard drive? 'Cause that's the one technical issue that's stopping me from converting my paid AOL account into a free one. I'm sure there's a way to configure and save these things, but I don't really know where to start. 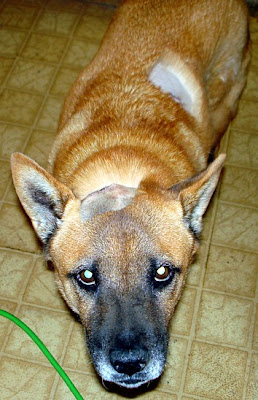 Tuffy, about a week ago.
Enough. I'm due at work in less than 6 hours, and Tuffy's appointment with the oncologist is at 11:30 AM. I've got to get to bed!

This may provide a clue on the mail issue:

"...And speaking of online mail servers, is there a way to save my AOL webmail to my hard drive? 'Cause that's the one technical issue that's stopping me from converting my paid AOL account into a free one. I'm sure there's a way to configure and save these things, but I don't really know where to start...."

I'm Tae and I write the AOL Mail Blog. You can use virtually ANY email program (Outlook Express, Thunderbird, Helix, etc) to access your AOL/AIM Mail account using IMAP or POP3. In the email program, create a custom folder, then drag-n-drop all your emails from your Inbox to the custom folder. Voila.