After fussing with last night's entry all evening tonight, I think I should probably call it done now. Since coming home from work I've changed which director was mentioned, tweaked the Oscar image, added the Athena picture (and incorporated a version thereof into the Entertainment section sidebar), gave Kodi a caption in that same sidebar, and tweaked the ragged edge of the Oscar. That'll do!

The truth is, all that was much more fun than anything else I thought of doing this evening. I was able to play around with graphics and captions while watching Doctor Who (sort of), which would not have been true of an actual writing project. I did work on The Mâvarin Revolutions today, though - briefly. While eating lunch as Carl's Jr. today, I wrote a whole sentence!

Yes, I know. I need to do better. Much better. 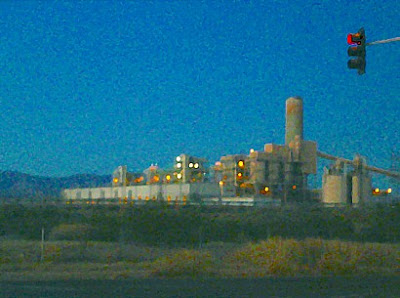 Meanwhile, though, here are a couple of images I've been playing around with since finishing the Scalzi entry. This first shot is of the power plant at dusk. I lightened it up quite a bit, applied an oil painting effect and boosted the saturation. 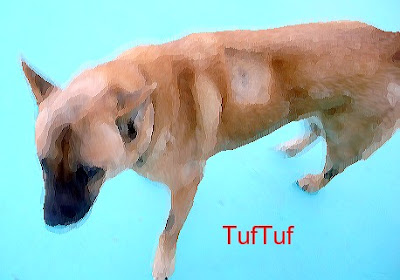 Here's Tuffy in a watercolor effect. The original shot was kind of an odd angle and a little out of focus, so it seemed like a good candidate for further distortion.

We have not committed to Tuffy's third operation yet. John want a better handle on whether she's sicker than the oncologist believes, as evidenced by her not eating even the hamburger John's been cooking for her. She eventually did eat some dry dog food tonight, so it's not as though she's starving to death. I hope to reach her regular vet tomorrow (yes, she works on Saturday) for further guidance. 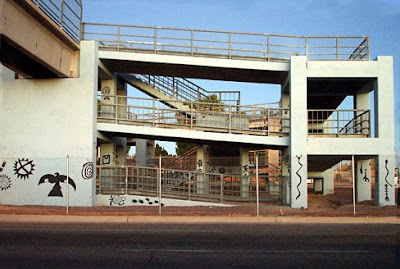 Here's another shot from Monday at dusk. I have no idea what this building is, but with its odd angles and staircases it seems a little Escheresque to me. The decorations are based on Southwestern petroglyphs. 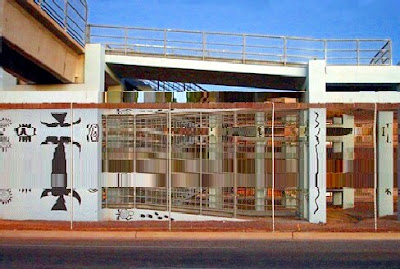 Here's a edit of the same image, using a vertical "magic mirror" effect and a vertical stretch. Kinda looks like an industrial strength funhouse! 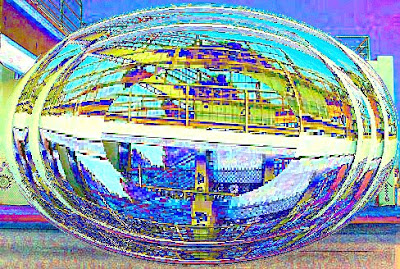 and if that wasn't weird enough, this one has solarization, negative, radial magic mirror and bubble effects, not quite in that order!


Enough. Tomorrow I'll be commenting in a few of your blogs, but for now, good night!