Saintly Pets (and not so much)

Weekend Assignment #188: What is the most unusual thing you've ever done with (or to) a family pet? Even if you've never taped breakfast meat onto fur, there's a good chance you and your fuzzy, feathery or scaly friend have done something out of the ordinary together at some point. What was it? Staging some fun (but humane) activity for this assignment works, too.

Extra credit: What's your most unusual picture of a family pet? May we see it?

Heh. Now that's he's actually gone and used the suggestion, I've got to come up with an answer for it. I'll admit that events related to Tuffy's cancerous tongue were on my mind when I thought of this, but I've talked that subject to death already. Besides, it's not exactly a fun thing we did together!

Still, having thought about this all evening, I've come up with the following:

In 1970 or 1971, our junior high had an environmental Science Fair. My contribution consisted of two small fish tanks. (I must have borrowed the second one, or used some other kind of container.) One was filled with clean, demineralized water, and a pearl gourami named Pearl. The other had high-phosphate detergent added to it. On a poster I explained that detergents and enzymes pollute the water, promote algae, and aren't good for the fish. In retrospect, I think this was kind of a lame project - I didn't give algae time to grow or anything, just made soapy, somewhat disgusting-looking water. The fish was just there to elicit sympathy for anything living in the polluted water. I specifically chose that gourami because it was one of the most aggressive fish in my ten gallon tank at home, and I didn't like it very much. But it didn't have a good time that day. 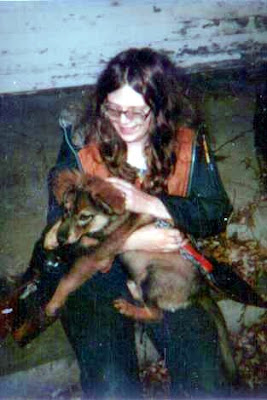 Princess Guinevere of Westcott Street, 1978
(and no, her legs weren't actually red)
When I was a senior in college, I lived in a rooming house on Westcott Street in Syracuse. The house initially belonged to my friend Bob, but that year he tried to sell it to another slumlord (as Bob often called himself). The sale never quite went through, and at one point a judge condemned the place in a fit of pique. It was Bob who gave me my first dog, Jenny, in the fall of 1978. He initially called her Princess, but I renamed her Princess Guinevere of Westcott Street, Jenny for short.

By March, 1979, two months before I got married, I was living in that one-room apartment with Jenny and a stray black Labrador puppy named Wayfarer, Wafer for short. One Sunday morning, the puppies started barking. I sleepily told them to be quiet, but they kept at it. That's when the guy across the hall, hearing me and the dogs, shouted, "Karen, get out! There's a fire!" I made a grab for my glasses, but knocked them on the floor and couldn't find them. I think I also broke something, and cut my foot on some glass. But I got shoes on, and my raincoat, and ran outside with the two dogs. I made no attempt to grab anything else. A nice firefighter went in and got me my glasses a few minutes later.

The puppies and I lived on the first floor in front, and the fire was on the second floor in back. There was little or no damage to my studio apartment, and I can't honestly say that Jenny and Wafer saved my life with their barking. But they would have, and I'm grateful. I eventually gave Wafer to the Humane Association, and she was promptly adopted.

3. Take Your Dog to Church Day. 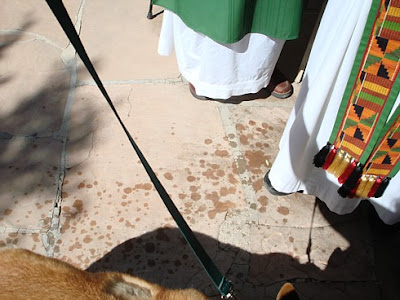 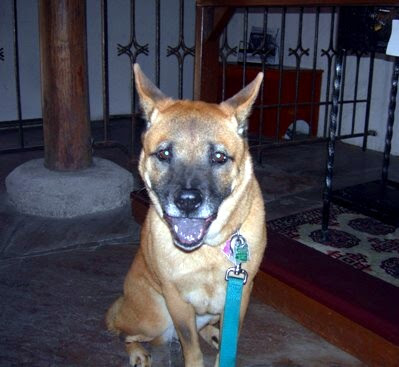 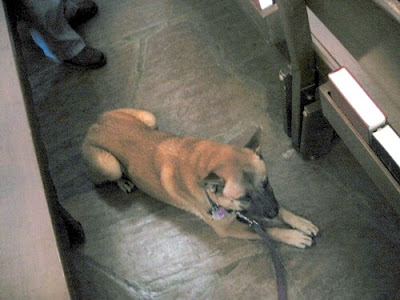 Tuffy in the pew, 2005
John thinks it's unusual to take your dog to church one day a year, and I suppose it is. But it's not unheard of. St. Michael's & All Angels in Tucson is far from the only parish to celebrate the Feast of St. Francis with a blessing of the animals. What is unusual, I think, is that I try to photograph the event at the same time. Here are some Tuffy pictures from visiting church in three different years. 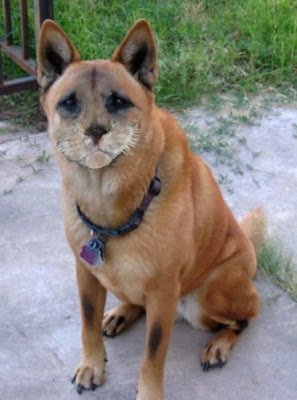 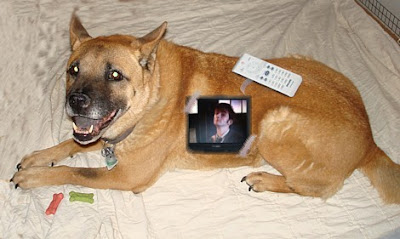 Teletuffy, July 2007
I have pictures of Jenny in the snow, Jenny in the van, Noodle in a dog pen, on a couch and in John's arms. I have photos of Tuffy in church, with her surgery sites showing, looking deformed, chasing her tail, begging, running, out of focus, half out of frame, too close to the camera, and on and on. I even have two photos of her with a TV edited onto her side, sort of a cross between Bacon Cat and the Teletubbies. But I suppose the most unusual pet photos I have are two edits I did in 2005 to make Tuffy look like a cat. It wasn't entirely successful, even with tonight's reedit, but it amuses me.

Thanks, John, for using my suggestion!