Good grief, what a yucky day!

First, I was stressed out because I thought it was my predecessor's last day, and I wasn't anywhere near ready to take over the job on my own. I'm still not. It turns out she's there tomorrow, but I have no great hopes that we're going to get any serious training in; history suggests otherwise (Say no more - I can say no more). I'll manage, though. Whatever I can't puzzle out on my own, I'll get explanations for from someone else. 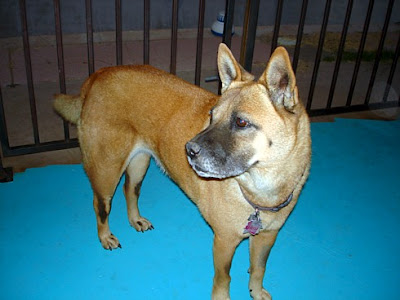 Tuffy shows off her good side.
Then, of course, there was the phone call this morning from Tuffy's surgeon. I know you folks are waiting for details, but there's only so much I can tell you at this point. Dr. K. said that they got all of the cancer but a little bit at the back of the tongue, but that's enough to grow back if left untreated. Dr. K. has to examine the tongue before she'll be able to recommend what to do next. I'm very much afraid that Tuffy is headed for a third operation. As expensive as it is, an operation would be both cheaper for us and easier on the dog than the alternatives. To say that John and I are seriously bummed is both obvious and true.

Meanwhile, Dr. K. had no words of wisdom to offer on the lack of eating, unless something went wrong with the stitches. But she's not bleeding, and there's no evidence of pain or lethargy. She just doesn't want anything but meat loaf or sausage or possibly hamburger. Even high-end canned dog food doesn't interest her - and this is a dog who would reluctantly eat dry food if we added a little canned stuff to it.

I really wasn't expecting the long-awaited pathology report on Tuffy to be bad news. Now I don't know what to think, but it can't be good. There's only bad or worse. And we've a week to get through before she gets in to see Dr. K. and the oncologist.

And if all that wasn't enough crappiness for the day, there was also this. AOL, in their infinite cluelessness, has laid off Joe Loong, better known as Journals Editor Joe.

Y'know, I really thought I was through being angry with AOL. Annoyed at times, yes, bemused by their short-sightedness, definitely; but not angry. But I was angry today. Here is a guy that the AOL J-Land community - that extended family of past and present AOL bloggers - saw as their friend and advocate. If there was a glitch or an upgrade, or a glitch in an upgrade, Joe would tell us what was happening and why, and when it would most likely be resolved. If there was a new feature, he'd explain how to use it. If an individual had a problem with a blog, Joe would try to solve it. And on top of all this, he kept us informed and amused with tales of online foolishness, thoughts on the business, ethics and philosophy of blogging, the weather in DC, and the current page on his Hello Kitty calendar. Much as I appreciate John Scalzi's work as our Blogfather, Editor Joe was the real go-to guy for journalers, the guy who was always there for us, the human presence that made interactions with AOL almost infinitely better than they would be otherwise. Even when the banner ads tore us apart and split us asunder, Joe was patient and helpful as always, never judging someone harshly on the basis of where they blogged or their level of expertise with HTML and such.

For AOL to lay off such an individual is not merely unfair or foolish. It's highly destructive to what's left of the AOL-J community, and equally destructive to whatever tattered shreds of goodwill remain between the company and the journalers. Already people are asking who will help them when problems arise, now that the one person who was always there for them has been shown the door. I'm sure some of the other corporate bloggers at AOL are fine folks, and maybe a few of them even survived today's layoff. But we knew Joe. We knew he cared, and would help if he possibly could. It's hard not to see this as another slap in the face from AOL. No, that's not quite it. For someone to slap your face means that they care about you - negatively, perhaps, but at least they're paying attention. Whoever put Joe on the list of layoffs clearly has no idea what an asset Joe was to the company, because he or she has no idea that Joe's constituency has any value. Journals.aol.com is just another generator of pages on which ads can appear, profitable insofar as they're fed by consumer-generated content, but perhaps more trouble than they're worth based on what happened two years ago. A "suit" who thinks of AOL Journals in such terms is certain to undervalue Joe's huge contribution to keeping J-Land alive. With his endless helpfulness and enthusiasm, Joe made it possible for people to overcome their dismay about the ads, and stay with AOL while people like me jumped ship.

He and John Scalzi even made it possible for those of us who left to retain some ties with J-Land, and even a smidge of loyalty toward a company that wrote us off. Do you know when I finally converted my paid AOL account to a free one? Tonight. It's taken me two years to get on the cable modem and a wireless LAN, work out how to save my email, and change my billing plan to the one marked $0.00. I'd be lying if I said my making the change today was in direct response to Joe's departure, but it's true that were it not for Joe and John, I would have found a way to drop my paid account a long time ago, whether I had the high speed connection or not.

Just a few days ago, I wrote about the dwindling of the old AOL-J community, as people get bored with blogging or fed up with AOL or both, and wander off elsewhere. There are more blogs out there now than any of us could read in a lifetime, but we've lost our personal connection with most of them. The ones branded AOL represent a small, often disregarded backwater of the blogosphere, with few new screen names and a distinct tendency for old ones to migrate to other platforms. We've gained a lot since AOL Journals were first launched - more choices, more versatility, slideshows and video and other widgets, gizmos and gimcracks. But we've lost a lot, too. We're lost the joy and enthusiasm that came with the novelty of this fun new means of expression. We've lost online friends, who dropped out, moved on, even died in some cases. And now we've lost Joe - not as a person and fellow blogger, but as our cheerleader, ombudsman, tutor and advocate. That's probably not the greatest loss we've had as a group. But aside from the people who have actually died, it's got to be right up there.

I've read a number of comments today that asked where Joe can be found, outside the confines of AOL. Not to worry - I've already added his personal blog to my sidebar. Here's the link:

Dumb Things I Have Done Lately

All the best, Joe!

Well said! Sigh. I don't know, AOL seems to be focused on serving themselves, period. This latest move is just sad, but proves once again that they don't care about the Journals community. And they never will. I wonder, will Scalzi's dismissal be next?

Well, remember that I'm a freelancer, and under contract, not an employee.

My understanding at this point is that AOL still wants me around, although there will probably be some contract negotiations this time around. So we'll see what they offer, and also I'll look at what my own bandwidth is these days. I'm inclined to keep at it in some form, however.

I was getting ready to pass on that I had found Joe via Googling when I saw that you've linked him.... I've added him to my Bloglines, but I still don't know what AOL was thinking {sigh}

About Tuffy, thanks for the update. I'll keep my fingers crossed for the best possible outcome. The whole cancer thing just s*cks.. no matter if it's a human or a furkid!

AOL has ceased being about community for a long time now and the decline started with the ill-fated merger with TimeWarner. I don't blame AOL for changing its methods of operation. TW gave it a mandate to become profitable and AOL can no longer be the insulated community it was when the web was in its infancy and broadband a pipe dream for most. That doesn't mean it isn't sad to see the old AOL really gone now.

Thanks for the link to Joe's blog. I wasn't reading the AOL one because it didn't interest me enough due to the AOL stuff, but this one looks good.

As for Tuffy, my best wishes for a full recovery. And maybe she isn't tasting food right with her tongue being affected. I don't know how doggie taste buds work, so that's just a thought.

I actually gasped in shock when I read John's post about Joe being laid off. That sucks! But Joe is a clever (and wicked cute) guy. He'll be fine, I'm sure.

Thanks for the link to Joe's blog! I didn't follow the AOL one, since I don't really use that blog anymore, but I'm glad to find this other one of his. It's a sad day for sure, and I'm afraid it may mean Scalzi won't be far behind him going out the door.