I've told this story before, although it's not really mine to tell. A friend of mine, Robin, used to work at a major talent / music /literary agency in L.A., and would occasionally run into stars in the hallway. One day, distracted with whatever he was about to do, he greeted Harry Belafonte with a hurried (but polite) "Hi, how are you?"

Robin's words were meant to be rhetorical, but Belafonte's reply was phrased oddly enough to get Robin's attention: "How are you feeling?"

"Much better, thanks," Robin said, and rushed off down the hall. 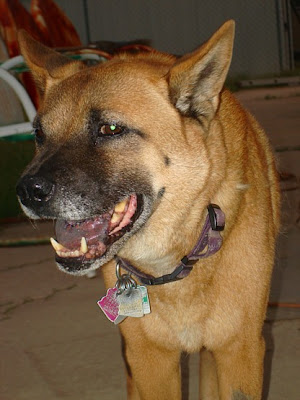 Tuffy this evening, her damaged tongue showing
Well, I'm delighted to say tonight that Tuffy is much better, thanks. She greeted me at the door tonight as usual, and ate a bunch of the watered down canned dog food, and seemed happy to be petted and scratched. It's clear that her tongue still hurts - she's mostly drinking her food rather than eating it - but she's definitely more chipper tonight, and I was able to get her pills inside her. Hooray! 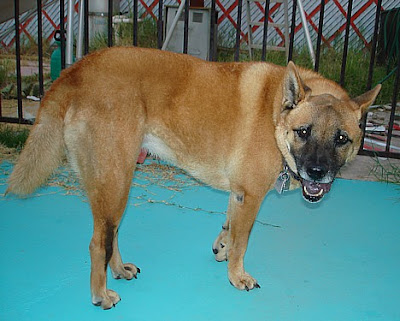 Tuffy of the lopsided tongue.
Supposedly we'll be able to tell that the tongue isn't quite straight, but frankly I'd rather not look! 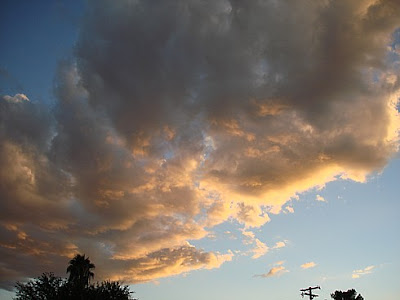 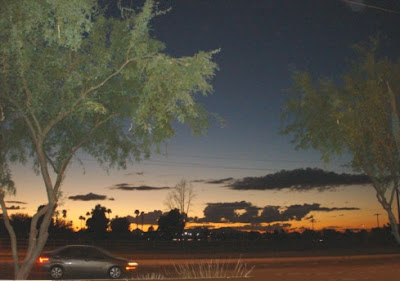 I got a couple neat photos tonight, shortly before and shortly after sunset, but not really during. The cloud photo above is not lightened or darkened or saturated in any way. The dusk photo is lightened a bit, but that's all.

The novel editing and any short story I might attempt will have to wait for another day, but I did accomplish something tonight. Tae - The AOL Mail Blog Guy left a comment on one of my recent entries, assuring me that AOL mail can be accessed and saved through a number of mail client programs. He mentioned POP3 and IMAP protocols, but not specifically how to set them up. Good enough, though: based on that hint, my Google search box suggested the appropriate search terms with very little prompting. It took me a few tries to get the account set up correctly, but the key info was found on someone's unofficial FAQ about it:

The AOL IMAP and SMTP server addresses are:

I spent a few hours sorting my mail into a bunch of "Saved Mail" subfolders, reading long-neglected letters and deleting the useless or outdated stuff. It's looking much better now! One neat thing about it is that Windows Mail, which is the Vista equivalent of Outlook Express, apparently talks back to the AOL servers about what's being read and deleted and saved. The AOL Webmail suddenly has the same folders I set up in the other program! Neat!

Glad Tuffy - and you! - are doing better.

Also glad to hear you found a solution for getting your AOL e-mail. I like the mail and calendar apps in Vista, but they won't sync to my handheld device. I wish Microsoft would fix that.

Oh! Lest I forget, Dirk Gently's Holistic Detective Agency started on BBC Radio 4 this week. You can access it via the BBC web site. I listened to about half of it yesterday before the server dropped the connection. It's an Above the Title production (Dirk Maggs producer) so you know it's gonna be good!