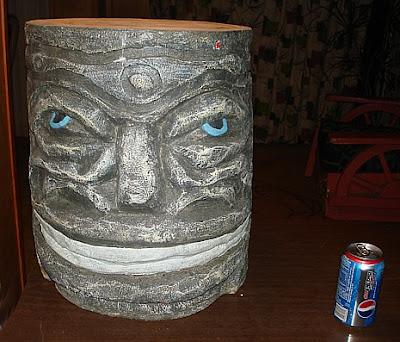 I made another pre-Halloween shopping expedition today, with limited success. Target's garden department had exactly one Tiki figure left, and it was only $12. I think he's about two feet tall, and he's hollow. He's not at all the same figure as the one that's already stanting outside our front door, so this will make for a bit of variety. After all, there was more than one Tiki god character.

The actual thing I was looking for, however, I did not find. What I want is a Tiki mask, something that I can actually wear on Halloween. Failing that, I'm thinking about making a Tiki head out of a cylindrical lampshade. But I did get a lead online tonight. Turns out there's a place called Flat Earth Trading Co., which imports and manufactures Tiki stuff and distributes it around the country. Not only are they located in Tucson, but they're only a couple of miles away from my office! I don't really expect to get exactly what I want, but nevertheless it should make for an interesting lunchtime field trip.

Other things on my Halloween wish list: flameless Tiki torches (so as not to burn the kiddies), fake tropical flowers, a string of Tiki lights, a decent lei, a new Hawaiian shirt and maybe, just maybe, some approximation of a volcano. My Halloween plans are consistently much more grandiose than I can ever pull off, but I'll at least give it a try. I can always call in Black Rose Kate to help me out it if the Tiki theme falls through. In any case I should ask her whether she's been to Polynesia in the course of her voyages. It wouldn't surprise me if she has! 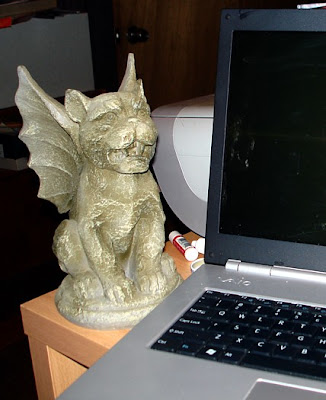 While I was at Target, I couldn't resist picking up this 9" tall gargoyle for $10. I've named him Little George. Here's the original, much larger George: 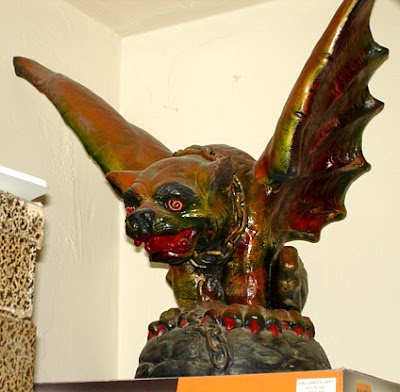 George looks a little odd here because the camera flash is illuminating him in a dark closet. I don't think the colors are normally that vivid. My artist friend Sherlock repaired his wing and repainted him about a decade ago. He used to be more of a uniform maroon color.

Hey, if this Tiki thing doesn't work out, maybe I can be a plaster saint?

Email ThisBlogThis!Share to TwitterShare to FacebookShare to Pinterest
Labels: Gargoyles, Halloween, Museum of the Weird, Tiki

I have that same gargoyle from Target. He is on my sink in the bathroom guarding everything in there. We were in getting something else and as I walked past it caught my eye and I HAD to have it. Yes, I am weird, Yes, I am spoiled, and finally yes I AM a geek! LOL!

Do you have a Party City or a Hobby Lobby in your area? They have a halfway-decent selection of Tiki-related party stuff.

That Flat Earth Trading Co. site is cool. I'll have to send it along to Chris so he can get his Tiki fix!