A Context for Daleks 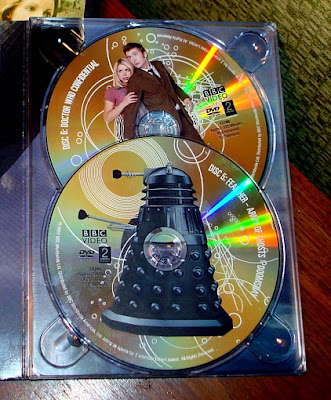 The Tenth Doctor, Rose Tyler, and a 2006 Dalek
So after a year or two of frequent (sometimes daily) viewings if the 2005-present series of Doctor Who, supplemented by the occasional older story, I'm finally doing something that many fans attempt from time to time: I'm trying to watch my way through the whole history of the show, from the first episode aired November 23, 1963, through seven Doctors' worth of the original 1963-1989 series, and on through the Eighth Doctor movie to the recent revival. It is extremely doubtful that I'll get my entire Doctor Who video collection between now and Christmas, when the next new story airs in the U.K., but I can make a start. 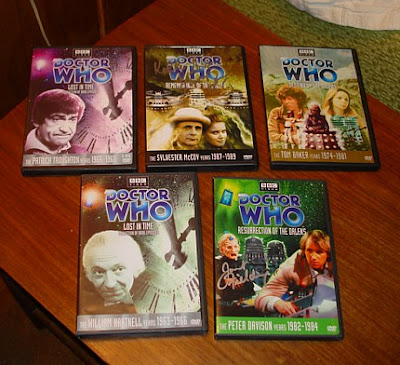 Lost-and-found episodes and Dalek stories, some autographed
It won't be every story ever aired, of course. Back in the 1970s, before the BBC realized the commercial potential of reruns and home video, a BBC employee culled the network's overburdened archive of certain old tapes, including many First and Second Doctor episodes, and the color versions of some Third Doctor ones as well. It wasn't just Doctor Who that got this treatment, by the way: the BBC's coverage of the Apollo moon missions, reported by science historian (and my hero) James Burke, were also deemed to have no commercial or historical value, and were pitched. Anyway, by the 1980s the BBC had long since come to regret the purge, and was actively seeking copies of missing episodes to replace when was destroyed. Fortunately, some of these have turned up over the years, mostly at television stations, in attics and garages and basements around the world. When we interviewed Jon Pertwee, who played the Third Doctor, back in 1990, he was fond of mentioning Nigeria as one of the locations where missing material was found.

Still, I have a lot of videotape and a lot of DVDs, and Target novelizations to fill in the gaps. And tonight I finished watching the second serial ever, one that made a huge impact on the history of the series, and on British popular culture. The story is called The Daleks (pronounced doll'-ex, more or less). Actually that wasn't the original name of Serial B, but let's not go into all that tonight!

What is interesting to me about this story now is the remarkable combination of familiar elements and great changes in the series over 44 years. Having watched Doctor Who off and on for 18 years, and having written about the show both professionally and as a fan, I have of course seen or read all the Dalek stories, but it's been a long time since I watched this one. Here is the Doctor, learning for the first time of these intelligent but merciless creatures, mutated in a nuclear war and encased in travel machines in a shape British fans fondly refer to as "pepperpots." Pertwee, less kindly but accurately, referred to the Dalek design as having "sink pumps and egg whisks, and tennis balls stuck all over them." The design has been refined and upgraded many times over the years, but the basic Dalek was already in place in this second-ever Doctor Who serial, and not just visually. Already they are clever, implacable enemies of all non-Daleks, as they talk of ex-ter-min-a-ting their longtime enemies, the humanoid Thals. There's even a sound effect, an electrical thrumming, that reappears in the Daleks' 2007 appearances.

It's not all the same, though. The early Daleks were formerly a species called the Dals, later retrospectively restyled the Kaleds; and they depended on metal floors and static electricity to survive and move around. But no matter. The contradictions and changes in the Daleks' history can all be explained away, more or less, and a number of fans have taken it upon themselves to do so.

To be honest, I've never been a big Dalek fan, for all their huge popularity in the UK. Nor am I, fovgive me, a big fan of the Doctor they faced in this early story. The First Doctor, at this stage, is vain, selfish and foolish, smart but not very practical or experienced despite his apparent age, and not very moral. In this story he sabotages his own TARDIS just to finagle an expedition into the Dalek city, which they do not yet know to be inhabited. At various times he urges leaving Ian or Barbara behind, two teachers that he recently kidnapped through time and space just to avoid facing awkward questions about living in a dimensionally transcendental police box stuck in a junkyard. Nor is he interested in helping the Thals, who have already saved his life, until he stands to gain further from the partnership. But the seeds are there. Over time this alien "Doctor" will become a champion of the innocent or oppressed, a protector of life, and the Daleks' greatest enemy.

Yeah. I think I'm going to enjoy this. But don't worry. I promise to get some of my own writing in, too. And I also promise not to write about Doctor Who every night!

Email ThisBlogThis!Share to TwitterShare to FacebookShare to Pinterest
Labels: Daleks, Doctor Who