Yes, it's Round Robin time again! This week's theme, "Sparkle," comes to us from Vicki, author of "Maracas." And yes, we're gearing up for a time of year full of sparkling tinsel, ribbons, champagne, lights and, if certain advertisers get their way, diamonds. But over the last few days, the only sparkling I've seen has come from a very different source. Let me show you. 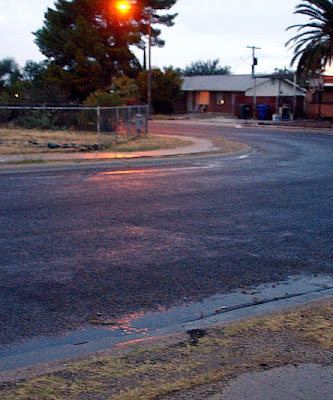 See it? On the ground there, that purply pink light? That's the reflection of a street light in a couple of puddles. Yes, folks, it's raining in the Old Pueblo! 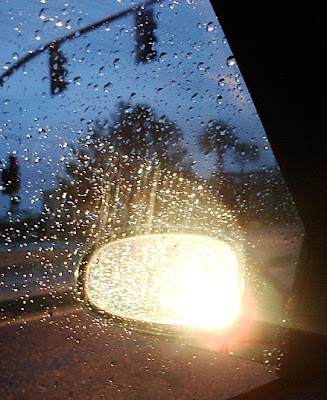 I had to really think about the word sparkle, what I think it means. I don't want to get pedantic about it and actually look up the word, but to me it means tiny, shiny bits of twinkling light. That's what I've been seeing over the last few days, drops of water lit up by headlights, streetlights and camera flashes. Kind of pretty, really, especially if one takes a moment to capture it digitally and present it. 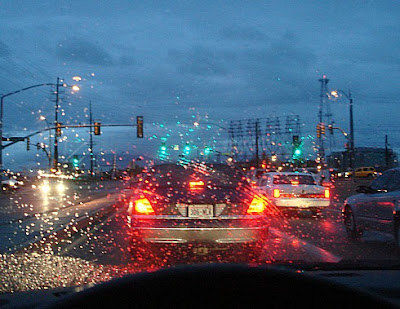 Yes, I know I posted a shot of taillights near the power planet as recently as Monday night. But the rain adds a whole new sparking dimension to the scene. 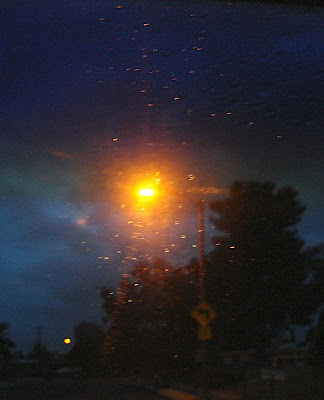 A streetlight near my house illuminates the rain against the moody sky. 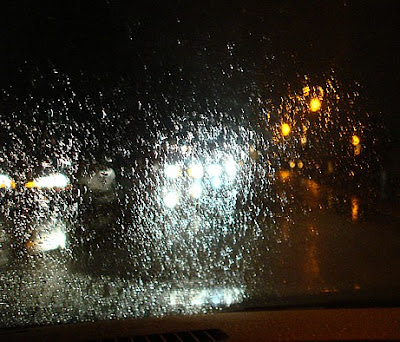 This was a line of approaching cars near the wash behind the high school. Can't really tell, can you?

I took other pictures for this, but I'm not quite satisfied with most of them. In some cases the sparkle was just too subtle for the camera to pick up, being either too small, too far or too poorly lit. One shot I tried for twice, unsuccessfully, was rain on Tuffy's head. Ah, well. Take my word for it, she was sparklingly wet!

Now go see the other Robins sparkle. And don't forget, you're also welcome to join in yourself! See the Round Robin blog for details.

Teena - Posted!
It's all about me!
http://purple4mee.blogspot.com/

The bottom 2 are very cool...very creative approach to the theme~
Marie

Rain was an excellent idea for the challenge topic. I really like the creativity here. :) Nicely done m'dear one. :)

We have a snow storm coming so I'd rather your sparkle :)

Nice! I guess where you are the rain is a bit like jewels falling from the sky. They really grab and throw the light. Great sparkles!

Wow it sparkles on your blog ! It's true a lot of things sparkel in this Christmas time !

I know what you mean about not being able to capture the actual sparkles on things, though. I didn't have much luck with it. I bet there's a trick to it...