It's December 31st as I write this, 3:08 AM. As usual I need to get to bed, and in any case I'm not ready to organize my year-end thoughts about what's happened and what's to come. But there is one subject that cannot be put off until tomorrow evening:

Today is John Scalzi's last day under contract to AOL.

As I mentioned previously, Steven, Carly and I have put together a Scalzi tribute journal on AOL, ScalziCelebration. Despite the fact that the old AOL-J community has long since scattered hither and yon, I was hoping for a better turnout of people saying nice things about our Blogfather. Still, some of you have added your thanks, kudos and recollections, and we'll be doing at least one new entry tomorrow with a roundup of these. Meanwhile, Carly has put together a Flat Scalzi entry, and we hope you'll join in the fun there, too. Speaking of which: 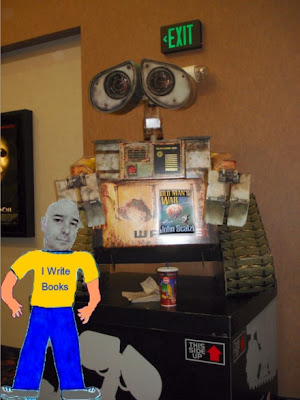 Here is Flat Scalzi hanging out in the Park Place Century Theatres lobby with a Pixar robot and a cool drink - Coke Zero of course! He said he felt at home with his science fictional compadre, and hopes to see him again at conventions and book signings. 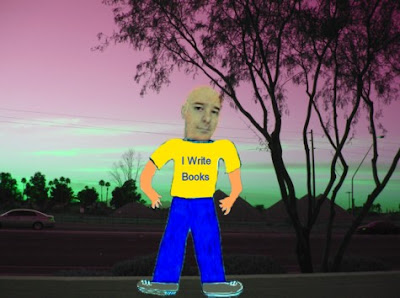 And here he is enjoying a Safeway sunset with me. Just having him around made the evening more colorful - and a bit surreal!

Many thanks to the real John Scalzi for four-plus years of fun and inspiration. See ya around!

It really is a shame he's leaving aol.. but then aol is known for making many, not very smart moves on their part!

I want to take a minute and wish you and your family a very Happy and Healthy New Year Karen! I hope this is your year for getting published!