"Just sits there, making random remarks."
- Lawrence Nightingale, "Blink" (
Doctor Who)
Okay, this is the part where I'm supposed to stop reading (and posting on, a little) www.doctorwhoforum.com, stop watching the Fifth Doctor story Terminus, write this entry, post to the church blog, work on Chapter One of Heirs, read Sara's chapter, listen to the messages on the house phone (if any), do the dishes, and go to bed, preferably in the next fifteen minutes.

Yeah. Like that's going to happen. I have a vision of Lucy Van Pelt, filling a four inch panel with the words,

HA HA HA HA HA!
See, I've been indulging in, well, I believe it's called squee. Certainly squee is involved. Last night I was up all night (as you can tell from the timecoding of my Scalzi tribute, if it's accurate, which it often isn't) reading a series of reports from fans in Cardiff, Wales, who successfully shouted out a number of Doctor Who shooting locations, broke the news about a major cast member's return to the show (which the BBC then had to confirm), and posted enough info about the scenes they saw to fuel a fairly coherent theory about what happens in episode 11 next year. It was fascinating, reading through a series of posts made over the course of about two weeks, during which major revelations were uncovered. I'm not sure I'd want to know this much (assuming I really know anything beyond two pieces of casting) about the upcoming episodes generally, but I'm all excited about this one, and have been busily working out in my mind what it will be and What It All Means.

Then someone pointed out that a character from the spinoff show The Sarah Jane Adventures was a likely culprit to have caused the whole episode 11 situation, and that moreover, he shared certain abilities, limitations, and even paraphrased dialogue with a major baddie from the old series. So naturally I had to rewatch the Sarah Jane story, and then the 1980s story with the original dialogue, and then the serial after that in case he said it again! 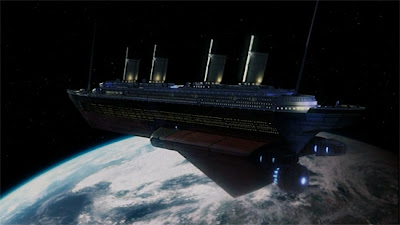 Someone else's screen capture.
Meanwhile today, for certain values of today that involve my insistence on calling Sunday morning 3 AM part of Saturday night, the BBC posted a ten second trailer for the Doctor Who Christmas special for 2007, "Voyage of the Damned." It consisted of three images: David Tennant as the Doctor, looking worried; Kiley Minogue as Astrid, looking perplexed, and the Titanic, looking like a space ship because somehow it is one. I think it's meant to be the original steamship, rebuilt and made spaceworthy as a luxury liner for wealthy space travelers; but I don't actually know that. But either way, it's really interesting!

What else have I to report? Forthwith some random remarks:

I gave blood today. The process slowed down in the middle of my filling the bag, and a Red Cross nurse had to actually hold the needle in place for a while. But it worked.

A steak and ribs combo doesn't seem quite as outrageously expensive if I stretch it out over two meals (i.e. take a box of leftovers home) and give the rib bones to the dog.

Having the wait staff of a restaurant dance and clap and shout "yee-haw" should never take precedence over clearing plates and refilling ice tea. In fact, I'd rather they skipped the choreography and shouting entirely.

My computer has been a little better today, but I've still had to reboot about three times. I turned off the screensaver, the running of which seems to set off problems.

Tuffy is out of prednisone. Too soon to tell whether her tongue is bothering her more or her appetite is dwindling. Bottle has a refill, but where do I fill a doggie prescription? Got to take her in for a follow-up this week anyway, so it may not matter.

John found someone's 1956 home movies with 1995 narration, all about winning a trip to Disneyland. It was a neat thing.

By dawdling tonight I've managed to postpone bed until the BBC put up the next fun thing on its online DVD calendar, a jigsaw puzzle. Just doing it now. Done! Finishing it revealed about half a page of script from the special, the contents of which provided no enlightenment whatsoever. Squee!

Email ThisBlogThis!Share to TwitterShare to FacebookShare to Pinterest
Labels: Doctor Who, Tuffy