Tin Man is on in the next room, heading into the last 15 minutes of tonight's installment, in which the evil sorceress catches up with DG and everything goes wrong. I saw it on the airing that immediately preceded this one, but I watched bits of the rerun anyway. As the name suggests, it's a modern reimagining of The Wizard of Oz, with major changes to the mythos throughout. The Dorothy character, DG, is a young woman whose father(!) tells her stories of Milltown and the old brick road. Her parents later turn out to be nurturing androids, sent with her to Kansas to love, raise and protect her, and prepare her to return to a world she knows only in her dreams. In reality she's the younger daughter of the queen of "the O.Z.," or Outer Zones. Big sister is the evil sorceress who is running things now. Her new friends are members of the resistance: Glitch, the genius with half a brain removed, is clearly the Scarecrow; Raw, the semi-human seer with a tail, is the Cowardly Lion, and Wyatt Kane, the hardbitten ex-cop with a tin star, is the eponymous Tin Man.

Is it a travesty, a rip-off, or a valid exploration of new characters based on archetypes from the source text? Is it a remake, or a new story, or neither? I'm leaning toward the latter option in both of those sentences. Without Dorothy Gale there would be no DG, and yet this 21st century motorcycle-riding ex-waitress differs strongly from her literary parent. Although she's referred to as a girl or a child, she seems to be slightly older than the Judy Garland version of Dorothy, and much other than Baum's child heroine. Dorothy wants to get home to her aunt and uncle in Kansas; DG can't get away from Kansas fast enough, and wants to find her "parents," and eventually her real mother. Dorothy is an ordinary (albeit brave) girl who almost accidentally saves Oz from two witches; DG is hidden royalty, a magical princess who must work hard to save the OZ from her own sister. Similar characters, different backstory and emphasis, but one informs the other. And overall I think it's a good idea. Baum, Thompson, MGM et al. have already taken the original characters as far as they can go. Now it's time to see what can be done if you strip them down to essentials and build from there. 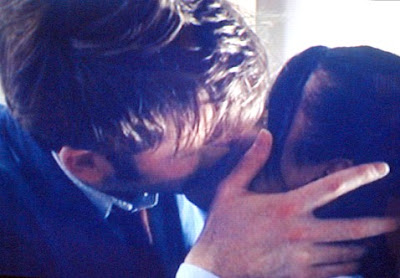 The genetic transfer
The current version of Doctor Who is a less extreme case, but nevertheless represents a departure from the 1963-1989 series. At the very least it colors outside the lines. I was thinking about this earlier today as I wrote a review of the Series Three DVD set on Amazon. There are fans of the original show - and I know a few of them - who dislike showrunner Russell T Davies' updating of the character and the series. Following on from two infamous kisses in the Doctor Who tv movie, the Ninth and Tenth Doctors between them have now kissed Rose Tyler twice, plus Martha Jones, the future Madame de Pompadour and even Captain Jack Harkness. In some cases the Doctor was more the kissee than the kisser. In other cases he did it for some plot purpose, removing the power of the Time Vortex from Rose, and arranging a "genetic transfer" so that Martha would test positive for traces of alien DNA. Nevertheless, they were kisses. For some fans, used to the Fifth Doctor's hands-off, brotherly relationship with Nyssa and Tegan and older Doctors as father figures, this is unacceptable.

Other bits of the mythology have changed as well: the Doctor's home planet has been destroyed in the mysterious Time War, and it's implied that the Doctor was responsible for the extinction of his own people. The only other known survivor from Gallifrey, who surfaces at the very end of Series Three, is a major nemesis of the Doctor from the old show, but greatly changed, physically and behaviorally. Now he's a cleanshaven, charismatic lunatic with drums in his head, and I know at least one fan who absolutely hated the two episodes in which he appears this way. Yet the essentials are there. You feel the centuries of history connecting him with the Doctor, the Doctor's compassion for him, and his need to show himself to be the Doctor's superior. And one of the biggest changes in the show is evident from the first scene of the first episode. The Doctor's companions, Rose, Donna, Martha, and even Jack, have lives outside the TARDIS, people they left behind who miss them and care about them. Our visits back to contemporary London and Cardiff to check in with Jackie and Mickey, Francine and Tish and the rest is a way to tether these characters to a familiar, everyday world, give them a personal history, and make them that much more real.

Reimagining. Tricky stuff, and it doesn't always work. Film critic Richard Schickel used to deride "the Disney version" of stories, which I suppose includes smoothing out the rough edges or characters and making the dangers of a story less graphic and extreme. The Julie Andrews version of Mary Poppins is considerably nicer than her P.L. Travers counterpart. I personally find the film superior to the stories, or at least equally valid; but there have probably been other characters over the years who were less well served. Meg Murry in the Disney version of A Wrinkle in Time is not an improvement over the L'Engle character, and her televised story lacks the heart of the original, dropping the religious and philosophical underpinnings and replacing them with an altered backstory, confrontations and special effects. Phooey.

So as I struggle with Heirs of Mâvarin, cutting a scene that's been in Chapter One for a good twenty years, I think about the validity of my own reimagining. Tin Man would be a considerably less rich story without The Wizard of Oz to provide context, but the only person with a full understanding of the original versions of the Mâvarin stories is me. Even my beta readers weren't there when Harry MacTavish was hanging around with Dag and Shela, and when Rani, a.k.a. Teng, became a Wraith of Thale two hundred unwritten pages later. Almost everything from that era is long gone now, except for Rani in a tree. And I find that I don't want him to start the story anywhere else, no matter what.

But I nevertheless made a number of major changes to Rani himself years ago, when writing the sequel showed me that having four legs and a horn was the least of his problems, offset by talents I didn't initially know he had. These innovations have become the hook to the whole series for me, and again, they are essential to the reimagined story.

On the other hand, much as I love the scene in which Rani talks to Clif and Suri, it's not essential, and cutting it gets Rani in trouble several pages sooner. So it goes away. And yet, I know that the scene happened. It's canonical, because it's been part of Rani's story a long time and nothing else has displaced the event or the dialogue itself. So think of it as a deleted scene, something that probably happened but we don't get to see it in the main narrative for reasons of dramatic economy and flow. But you do get to read it. I'm about to post it on the fiction blog. You won't have the context now to fully appreciate it, but someday, when the books are in the stores, that may change. I hope!

And maybe someday if I'm both persistent and lucky, I'll also have to decide whether some producer or director's vision of Rani is a valid reimagining as well.

I watched the first episode of Tin Man last night (and it is currently running in the background as I wait for tonights episode to start). I find myself looking forward to tonight's episode. So far I've found more to like than to dislike, but we are only 1/3 of the way in... they still have a way to go ;p