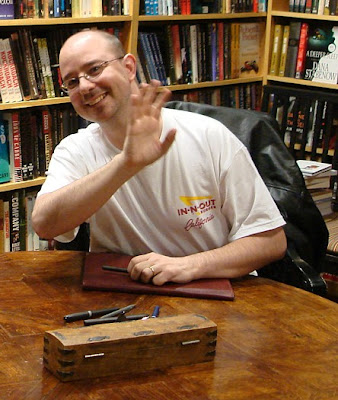 Wave bye-bye to daily doses of By the Way
The other shoe has dropped: John Scalzi has announced that his contract with AOL runs out at the end of this year and is not being renewed. No more Scalzi on the Ficlets blog, no more By the Way, except for possibly the occasional unpaid posting "as a civilian." No more Weekend Assignments or Monday Photo Shoots, unless someone else manages to take up the slack. As of January 1, 2008, the blogosphere is going to have a big hole near its heart - a Blogfather-shaped hole. Scalzi will still be online, but no longer as our friendly AOL-based guide to the Internet.

For once, this is not AOL shooting itself and others in the foot; not entirely, anyway. Scalzi reports that it was a mutual decision, and frankly it's not an unexpected one. For some time now it's been clear that the AOL gig was starting to get in the way of his burgeoning book career, and vice versa. As obsessive as I've always been about posting my Weekend Assignment entry every single Thursday night/Friday morning, and my Monday Photo Shoot entry every Monday night, even I've had to back off in the last month or two, because Scalzi himself could no longer keep to that schedule every single week. And who can blame him? In a choice between meeting a contractual deadline for turning in a book manuscript, or asking readers to post a picture of a tree, I doubt that many of us would give the meme our highest priority.

So here we go, heading into the end of an era, yet again. A lot has changed since I posted my response to Weekend Assignment #7, way back on May 30, 2004. I was just looking over some of Scalzi's own entries from 2004, and was struck by how very different they are from his later ones. For starters, they tend to be short, vanilla text with no pictures, and relatively lacking in that trademark Scalzi humor. Some of that was the limitations of the blogging platform: you couldn't do long entries, I don't think you could choose your text size, and photos weren't that easy to post. But it hardly mattered. AOL J-Land was just under a year old, and most people had barely heard of blogs, let alone memes. John showed us how to blog, right there on AOL. And for most of us in those days, AOL was the only game in town. Everyone read By the Way, and so many people did the early Weekend Assignments that it took Scalzi three entries a week just to link to the responses. That first one I did, about vacations you haven't been on, had 76 comments to his original entry. Imagine! Even allowing for the responses that were in the comment thread rather than their own blog entries, that's a huge number of comments. Offhand I only know of one contemporary AOL Journal that gets numbers like that, and it's not By the Way.

And I suppose it's inevitable that the response to the Weekend Assignments and Monday Photo Shoots has dwindled over the past couple of years. The AOL-J diaspora in the wake of the banner ads soured many people on anything to do with AOL, and John undeservedly caught a lot of the flack over that. Tempers eventually cooled, but it was never quite the same community again. Lots of us ventured out into the wider blogosphere, and discovered a world beyond AOL, with lots and lots of memes we could use to fill up our blogs. We learned HTML and CSS (well, some did, anyway), and blogging platforms competed to have the best features and the most ease of use. We no longer needed John Scalzi to explain patiently how to post a picture or create a hyperlink, or to give us something to write about on a Thursday night. And somewhere in there, AOL stopped promoting By the Way, so that its readership thereafter consisted mostly of the longtime faithful. 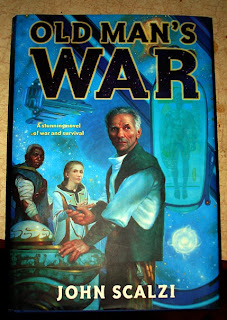 During this same period, the writing career Scalzi had successfully nurtured for years stopped being mostly about corporate work as his fiction writing took off, supplemented by the occasional non-fiction book. He's now had a dozen books published, if you count The Sagan Diary. I'm lucky enough to have his award-winning debut novel, Old Man's War, in hardcover, and personally autographed. (I held off reading it for a long time, assuming it was too military to appeal to me. I was wrong.) It's one of four Scalzi books I own to date, and even at that I'm a slacker. His non-fiction book The Rough Guide to Sci-Fi Movies is on my Amazon wish list, along with The Sagan Diary. He's got at least three books scheduled to come out in 2008. His books have been published in multiple languages, and he's been an honored guest speaker from Google HQ to France.

And meanwhile, some of the recent Weekend Assignments and Monday Photo Shoots have had as few as four or five responses. Is it any wonder that he's decided that now would be a good time to make a change, and concentrate on the books instead of corporate blogging?

But it's sad for us, the longtime readers of By the Way, as we lose our last rallying point, and perhaps our last connection to the halcyon days of early J-Land. We can always check in with Scalzi over on Whatever (I stubbornly never add the definite article to that blog's title), but it's a safe bet he's not going to be suggesting blog topics for us, and linking to our responses. I have to say, I've seriously considered trying to take over Scalzi's two BTW memes, if he and AOL don't mind. But even if I did, it wouldn't be the same. There is only one John Scalzi, one Blogfather.

Still, let's set aside our regrets. Instead, let's look back with gratitude at all he's done for us on By the Way (and secondarily the Ficlets blog), and forward to all the books he'll have more time to write now. Surely that's worth missing out on the continuation of two weekly memes that were already getting lost in the Internet clutter.

Thanks, John, and all the best!

Amen, and Amen. What a classy, thoughtful response.

Scalzi did an awesome job with the community, and even we lurkers will miss By the Way. It is indeed the end of an era.

Well, I saw this coming, especially in that AOL had stopped promoting John and By The Way for over a year now. AOL didn't care about the journals community in 2005 when they added the banner ads, and they as much as admitted that at the time. Then we lost Joe... twice I believe, the last time for good, so why keep John on the payroll, for a community project that they don't care about? It may have been a mutual decision, but something tells me AOL didn't particulary want to keep paying a contract... no they are about receiving... not giving.

Excellent entry my dear. I know this is especially difficult for you, so hang in there. :) We core AOL journalers are still together, after all the fuss, we will keep you company.

John is sooo going to be missed.