Do I Dare to Live My Dreams? 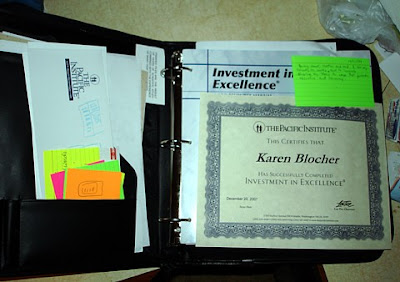 Weekend Assignment #196: What are your hopes or plans for 2008? Any big projects for the year? Anything you hope to accomplish or change? Or will you just relax? Because, you know, that's okay, too.

Today I had the fourth of four sessions in a seminar called Investment in Excellence. It's a sort of motivational / transformative program that encourages you to dream big, and to achieve those dreams with affirmations and "self-talk" and other techniques. As with the first three sessions, I'm not sure how much I believe it all. Some of it makes a lot of sense, but a lot of it seems to be predicated on wishful or magical thinking. Apparently it works for some people, but it's not very compatible with cynicism or even rationalism. After the first two sessions I sort of vaguely intended to give it a try, but soon got distracted. My fear is that I'll do a tiny portion of what the program recommends, forget to do even that after a while, and then claim, "See? It doesn't work for people like me." But really, I think I ought to swallow my distaste for affirmations and such, and give it a fair chance.

One of the things we did today was write a letter (well, sort of a letter) from the fictional perspective of December 20, 2008, looking back on all we've accomplished in the past year. We placed these in envelopes, addressed to ourselves. The facilitator collected them and will mail them to us a year from now. Obviously I don't have my letter to refer to now, but here's the gist of what I said I'd done between 12/20/07 and 12/20/08:

What I Accomplished in 2008
Now, some of that stuff is clearly unlikely, but none of it is impossible. To get there, I'm essentially supposed to train my brain to expect those results, become dissatisfied with the status quo, find out what I need to find out, seek answers that may be hiding behind personal blind spots, eliminate fear, self-doubt and other negative thinking, and "grow into it." Can I do that? Will it result in book publication and all the rest of it? How about half of it?

But isn't it better to give it a shot than to continue to mope along, avoiding things out of fear and self-doubt and making excuses for my lack of progress?

Extra Credit: As you know, it hasn't been a wonderful year. I've written about it all repeatedly and at length, but I lost one job when the company collapsed, lost another when the temp position didn't lead to the permanent one, had a stressful first month at my current job due to not knowing anything about the industry or the company procedures, apparently lost a friend in a one paragraph letter, and almost lost my dog to cancer. Yikes! But next year will be better. I say that every year, and once in a while I'm actually right. May it be true this time!

Merry Christmas Karen! And I do hope this coming year holds nothing impossible for you!

Karen, this year has been a tough especially the last few months. I hope that 2008 brings many good things to your life. I have enjoyed sharing your life via your journal. Merry Christmas to you,John and Tuffy.
Barbara (beckerb6@aol.com)

I attended a lot of these types of seminars when I was a working gal. I spent a great deal of time rolling my eyes. It wasn't often that I got anything constructive out of these types of sessions. But now and again there was a kernel of truth...a gem of information that was useful. I sincerely hope every item in your letter comes to pass, my friend. Merry Christmas to you, John and Tuffy.

I don't know what it is about affirmations, but many people swear by them, including Scott Adams of Dilbert fame. Maybe I should give them a try. Here's hoping all your dreams come true.