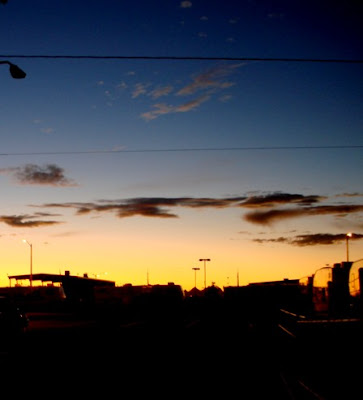 Just the usual.
Oh, how I'm starting to hate those two words "Not Responding," almost as much as the slow-moving blue circle that says the computer isn't in a hurry to do much of anything. I've had intermittent trouble with this laptop almost since I got it; my favorite glitch was the night it decided that English is typed from right to left, and rendered my text accordingly. But the past week or so, I've hit a whole new level of malfunction and inanimosity.

Some symptoms:
And so on. And the computer starts doing all this within an hour or so of shutting down completely and then starting up again. It gets old really fast, ya know?

So tonight when I got home and rebooted, Windows volunteered a window that listed a few dozen problems over the last several months and offered to look for solutions. In my experience, such things almost never find solutions, but it was worth a try. In a moment it said it didn't know why I was having the first batch of problems, but it traced a second batch to an Intel graphics accelerator chipset driver (or somesuch) and blamed everything else on Firefox. Well, that last part out I'd worked out already, thanks. The acute difficulties date back to the latest Firefox update. Others seem to date back to the latest AIM update.

Not much I can do about Firefox until they issue a fix, unless it's to break down and use Internet Explorer instead. Am I that desperate? It may come to that. But I went to the Intel site. It told me how to identify the driver I have now, so I duly looked that up, and the version of Vista when it asked for that. It directed me to a certain download, which I saved and then tried to install. That's when it said it was the wrong driver for my computer! Then why did you direct me to that driver, you stupid website? Needless to say, my feedback to Intel about their website was less than enthusiastic.

But I ran Windows Update, and it claimed to give me Service Pack 3, if I read that aright. Maybe that will help.

There it goes again, freezing up for thirty seconds as I try to select the label "Inanimosity."

AOL was really messed up for me last night. I was also trying to read Scalzi and some other journals over there, and the server kept going down. It looked like they were pushing out some changes. The page layout on the sign in page changed after the server came back. In addition, my AOL profile linked from my AOL login was gone and I had to sign up for an AOL journal to get any sort of profile. So I did as I have on Blogger: left a short entry with my URL.

Honestly, I resent that it's darn near impossible to comment on someone's blog these days without being a user of the service. Every time I think about moving to Typepad or Wordpress I then think about getting locked into someone else's proprietary blog world and so go back to banging away at my own code.

Firefox is actually working better for me after the last update. It takes up less CPU. I'm one of those users who keeps a ton of browser windows open. It's taking up about 100K less memory, and my resources are now running 5-20% rather than 60+. Firefox did pass two updates last week, so you might double-check that you're at version 2.0.0.11.

As for the video driver, rather than Intel go directly to your computer manufacturer. Vista is pretty good at identifying outdated drivers, but they tend to want to send you to the chipset manufacturer rather than the people who made your computer or video card. I also have a sneaking suspicion that a chunk of their data is supplied by hardware manufacturers, so MS gets a a partial pass on this one.

If you're still having trouble drop me an e-mail and I'll see if I can help you out.

Yes, that's the version I'm on. The Mozilla site did say something about a "nightly build" of Firefox, though, and maybe my last update just compiled wrong or something. I think I'll try reinstalling tonight, and check the Sony Vaio site as you recommend. Thanks!