Tcha! It's after 2 AM, and I'm just now getting around to actual blogging, as opposed to blog-jogging, and hanging out on http://www.doctorwhoforum.com/, recently spun off (sort of) from Outpost Gallifrey. The whole day has been taken up with sleeping in (11 hours!), computer fun (see above), Disneyland Secrets, Stories and Magic (Disc One) and a couple of phone calls I can't discuss here (just in case you think I have no discretion whatsoever). Relaxing, very, but not perhaps the best stimulation for one of my patented late night rants.

I was thinking earlier tonight about writing another Doctor Who-related entry, on the theory that I haven't inflicted one upon you, faithful reader, in a week or two. But actually I did one on the 9th, so I'll forbear. I'll just let it build up and then explode out of me, just in time for this year's Christmas special. If you actually like it when I jabber on about Doctor Who, you've got that to look forward to.

No, instead let's continue on with this whole black and white thing. I've been reading the other Robins' entries, and it appears that nearly everyone did theirs the other way from mine. Rather than set cameras for black and white photography (I'm not sure all digitals offer this), they mostly converted their color images in PhotoShop afterward. I don't have PhotoShop, but my cheap (free with my camera and my computer) alternative, PhotoStudio, has a similar conversion available. So tonight let's show off one or two leftovers from my black and white shoot, and a few color photos that I'm gonna convert right now for your possible entertainment. 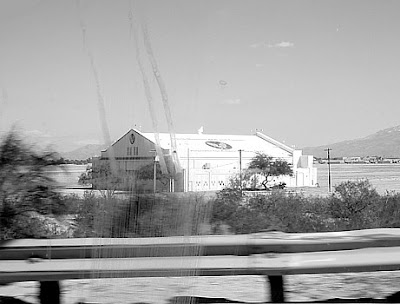 This first shot is probably the most interesting of my true black and white leftovers. I foolishly took the shot with the window still up as I passed this building at Davis-Monthan Air Force Base. The three trails coming down from the sky aren't bombs; they're Tuffy drool. Her infected tongue seems to be getting a little better, but I haven't cleaned the window since taking her to the vet on Tuesday. (Sorry for the grossness factor.) 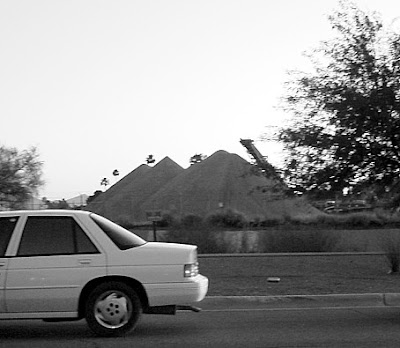 Piles of dirt where the sunset belongs
I was actually hard-pressed to show you a second black and white leftover. Most of the ones I didn't post last night were either hopelessly boring, technically deficient, or similar to a shot I did upload. This one isn't pretty or anything, and I've cropped it from a larger image that's even less so. But those rather dull and ugly mounds of dirt are significant. They turned up this week in the vacant lot across from Safeway, the one I look out upon for many of my sunset photos. This may mean that particular practice may come to an end soon.

Now, on to the color conversions! 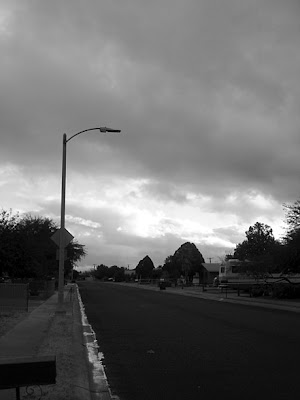 From two weeks ago: a gleaming puddle under cloudy skies
This was originally intended for my "sparkle" entry!

Next up, two shots from the foggy morning this past Wednesday, converted to grayscale: 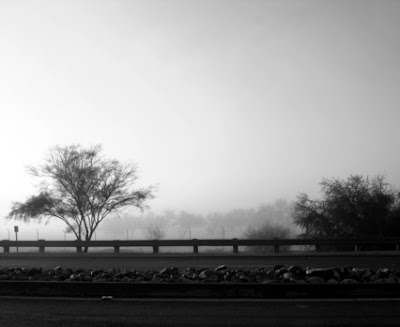 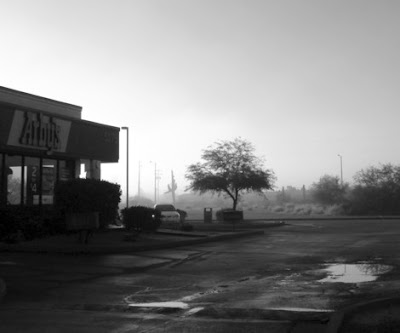 A foggy patch of desert beyond Arby's

And finally, two shots from the Safeway parking lot, where I take a lot of my photos for one reason or another: 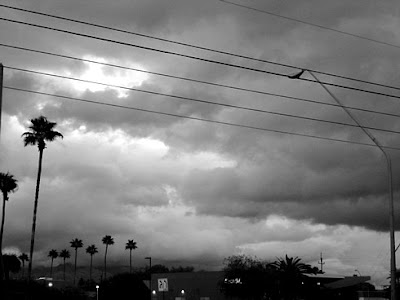 Clouds overtake all at my usual sunset spot 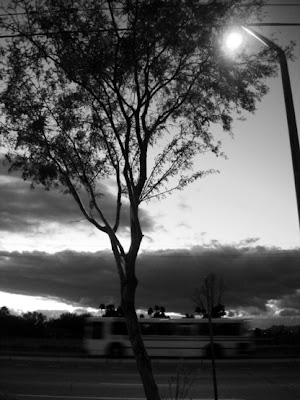 A sapling at sunset
Yeah, those'll do, and I never even got out of my December folder. Lots of dramatic weather so far this month! Good night!

I love the last one, so much unsaid. Bus leaving town, street light on, invokes many emotions in me.

I really enjoyed your photo's too!
I enlarged mine but I think it looks better smaller....
And... thanks for the Welcome! I'm really excited to play!

Your color conversion shots are great. I also like the photo of the base, but it probably would have been better without the dog drool.

I don't use Photoshop either. I usually just tune and post my photos with Picasa. It's quick and easy for blog posting. I recently found a program called "GIMP." It's a free, open source program that's supposed to be comparable to Photoshop. I haven't had the opportunity to try it out yet. My old digital camera is about shot. I'm hoping to get a new one soon after the first of the year.

You can check out GIMP at gimp.org.

Oooh - these are great! LOL @ the Tuffy drool! I really like the way your conversions came out, especially the first and the last ones. I don't know how they looked in color, but they make very stunning black & whites!