Too Little, Too Soon

Weekend Assignment #195: Do something extra nice for someone you know. Which is to say, something above and beyond your general level of niceness. Could be for a spouse, or a friend, or a co-worker, or a child, or someone you've met randomly as you're walking around the mall.

Considering that we only have a few of these things to go, I'd like to stick with my usual pattern while I can, and post my Weekend Assignment entry on Thursday night. However, I haven't really done anything more than ordinarily nice today. I mean yeah, I bought John his favorite salad an hour ago at Safeway, because our conversation at dinner led me to think it might be more helpful to him than one might expect of a mere salad. But that's still pretty darn ordinary, isn't it? 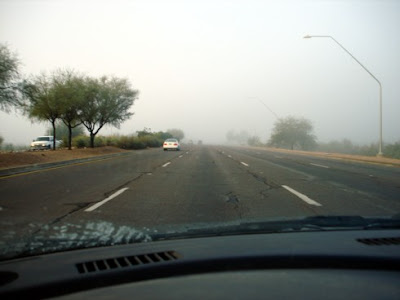 A foggy morning in Tucson: Wednesday, around 7:45 AM
And a couple of days ago, the day of the fog, I think, I saw a homeless man, one of the regulars, on this stretch of meridian at Irvington and Alvernon. They tend to congregate at intersections outside the city line, because they were banned from doing so inside the City of Tucson some years ago. Sometimes they sell newspapers, but this guy had no newspapers at that particular moment. I reached into my wallet, and pulled out a five, because it was the smallest bill I had. "Go get something warm," I said.

See? Ordinary. And it wouldn't count anyway, because it happened before the assignment. I haven't done anything nice yet in response to the assignment itself.

But I'll see what I can come up with over the weekend.

Oh, and by the way. Look what we had this morning! 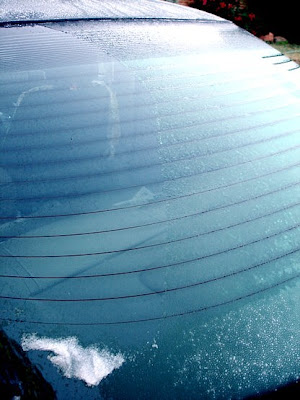 Frost! Real frost on the back of my car!
Karen

Congratulations. I have 3 feet of snow between me and my Jeep.

Well, Tucson is never going to top New York or New England for cold weather, is it That's rather the point of the place. Laugh at me when it's 75 or 80 degrees there, 115 here!