As Cold as a December Night in Tucson

Your Monday Photo Shoot: Show something frosty. A frosted window pane, a frosty mug of beer, a pet coming in from the cold -- if it's frosted, it's in. If it's not particularly frosty where you are, or you don't have any frost laden pictures in your archives: Fake being cold. Because that would be funny.

My first reaction to this one was come on, Scalzi! Frost? In Tucson? It's not that it doesn't happen, but it's certainly not a common occurrence, or likely to happen on the average Monday night in December. Fake being cold? Fake, how? Pretend to shiver, as I did one day in elementary school when a substitute teacher proposed to give the job of retrieving the book cart to whoever looked the coolest?

But then I went outside, into this: 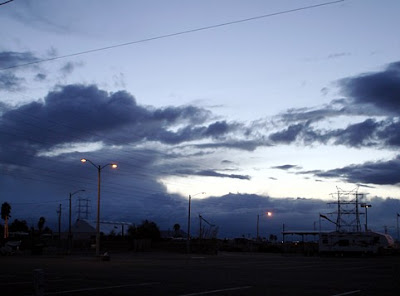 A cold and cloudy dusk - but no frost
And yeah, it was cold. I thought, well, maybe frost on a December night in Tucson isn't so farfetched after all!

So I went outside with my camera shortly before midnight. No frost, but there's certainly lots of condensation on the car windows. Does that count? 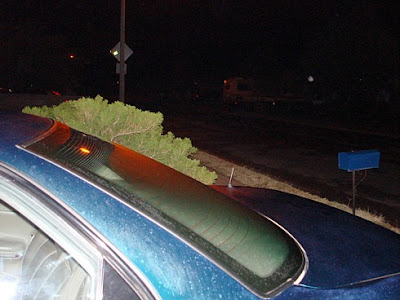 I swear the car was clean this morning!
Overnight: Showers likely. Mostly cloudy, with a low around 43. South southeast wind around 7 mph. Chance of precipitation is 60%. - NWS/NOAA

Okay, so no frost per se, because it won't be a hard freeze. I guess the provision about faking it comes into play at this point. I can use the moonlight filter in PhotoStudio to emphasize the condensation a bit: 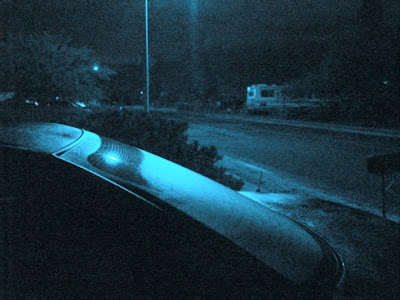 Fake moonlight on the Eagle's back window
And heck, there's a "frost" effect in the program as well. Let's have some fun with that: 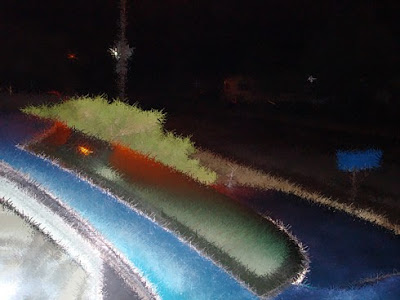 Fake frost on the Eagle 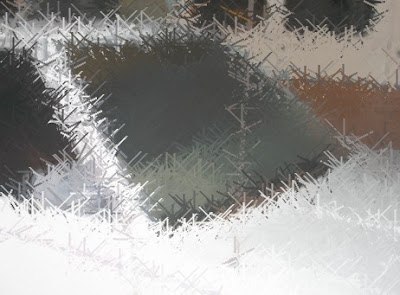 Ridiculous fake frost on the old New Yorker
Really, though, I'm not dying for colder weather here. My office at work has no heat. The larger room does, but it doesn't reach my office, which is against a concrete outer wall. I purchased a space heater and brought it to work, but it almost immediately trips a circuit breaker when I plug it in. I'll be taking it home tomorrow. 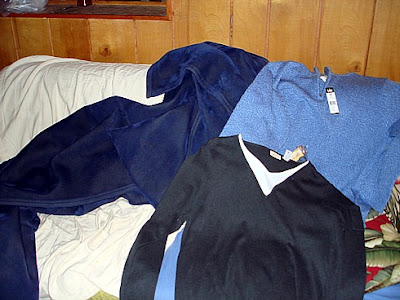 Two cold-weather purchases from today, plus John's blanket
I was especially cold today, even with long sleeves under my interview jacket - not that I'm interviewing, but I thought it would be a good thing to wear on a cold day. The shirt was inadequate and the jacket doesn't close. So I ventured out to a nearby outlet mall and bought a long-sleeved black shirt with a gold modern Christmas tree design, which looks really sharp under the black jacket; plus this layered top and this blue zip-up sweater. That other other thing in the picture is the blanket John huddled under tonight while watching Star Trek ("The Menagerie"). It may not be frosty here in Tucson tonight, but for two people who have lived in Tucson for 21 years, it's plenty chilly enough!

I have been in Tucson for the past week at UofA and I encountered the cold and the frost and ice on cars. I thought it would be paradise! LOL

But I get to go back from paradise to winter wonderland in Missouri today. It's calling for 6-8 inches of snow. Yuck.

It was definitely unusual weather. We get snow visible on the mountains a few times a year, but usually not that much of it. Maybe next time you'll get sunny and in the 60s!