Flotsam of the Museum of the Weird 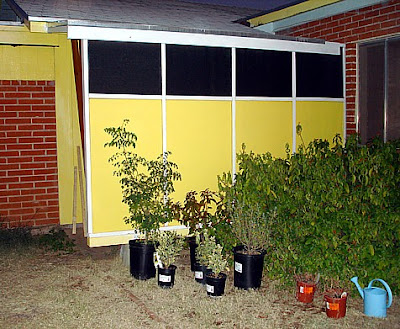 The "alcove" is behind those screened yellow panels.
Oh, you mean the alcove! That's what I call the six foot stretch of covered sidewalk that leads to our front door. John put up an outer wall and a roof years ago to shade that part of the house from the summer sun. Since then the alcove has become the mini-spookhouse kids have to brave at Halloween, among other things. 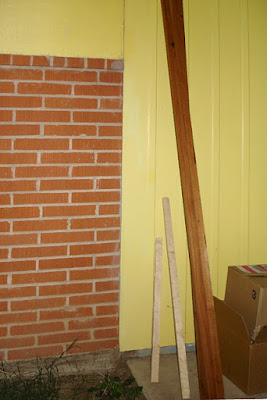 Just at the moment it's a bit of a staging area, as John moves some things about in preparation for doing other things. (Mysterious, ain't it?) I won't show you every box and oddity, but here are some bits of wood, probably left over from some renovation attempt -- or on their way to being used in one. I'm not sure which. 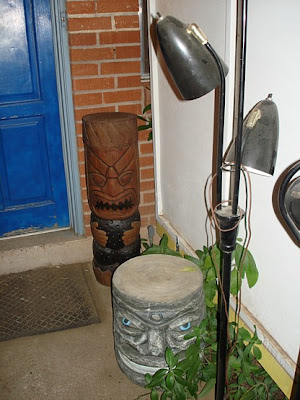 Over by the door, our Tiki friends still guard the entrance to the Museum of the Weird. Just at the moment they're defending us from the invasion of the vintage pole lamps. 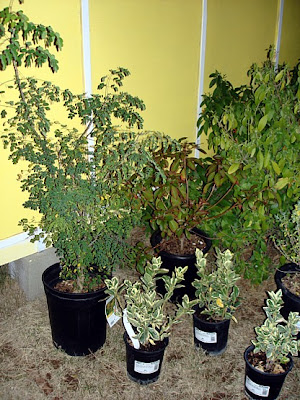 Something that was in the alcove over the weekend is back in front of it now. John bought these plats about a month ago. He used the alcove to protect them from the hard freeze the other night. That was the night before the real frost picture, remember?