It's All Too Much

This afternoon a friend from church took me out to lunch. We talked for at least an hour, mostly about stuff going on in my life at the moment. I don't tell you guys everything, and it was good to get some face to face feedback, ya know? At the end of it all she said she could see why I would be stressed out right now. Between that conversation and a few other recent ones, I have a good idea now what to say in my letter to my other friend who sorta kinda dumped me. I just have to face up to writing it!

After lunch I dropped my lunch-buying friend off at a nearby store. This was a little tricky, because there was a police car parked sideways in the right lane westbound. As I maneuvered around this obstacle, I could see that the car was there to force incoming Best Buy customers to enter via the east end of the lot, departing ones to exit the west end and turn right, and other traffic to stay left so the Best Buy people could get in and out. (Needless to say, I didn't attempt a photo.) I don't recall ever seeing quite that level of traffic control going on for mere Christmas shopping. And it was nine days before Christmas! What's it gonna be like on the last Saturday before the holiday?

So okay, I dropped off my friend. The next light up was Chantilly (which always reminds me of the Big Bopper), the drive at the extreme west end of Park Place Mall. I figured I would turn left there, take the loop around the back of the mall, and head home that way. Or maybe I would drive across the front of the mall, so I could stop at Borders. Without thinking it through or even quite deciding, I went for the second option. 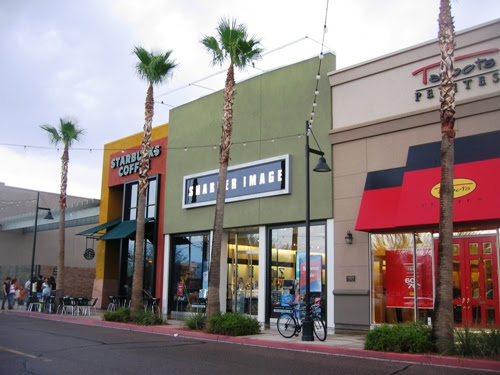 Park Place Mall, Summer, 2005.
Today traffic was stop and go (mostly stop) along this driveway.
Traffic was bumper to bumper from one end of the mall to the other. At nearly every row, cars were backed up all the way to the driveway in front of the stores, as people waited for other cars to back out and parking spaces to open up. It must have taken me ten minutes to get to the other end of the loop drive.

Needless to say, I didn't make it to Borders.

I don't normally mind crowds. The huge crowd at Disneyland on December 31, 1999 that freaked John out, I took in stride. I will sometimes put up with an announced 20 minute wait for a restaurant. I am reasonably patient and easygoing about such things.

But this was too much. This was ridiculous. This was so not worth it.

I have not bought one Christmas present yet this year, except Toys for Tots. I was going to start it today, but that traffic put me right off the idea. This year I'll do as little offline buying as I possibly can.

If there's something either of us needs that's only at the mall, John, let's make a pact to either do without or wrap up a raincheck. Instead we can go to Target and Walgreens and to Best Buy, where at least the police have our backs.

Oh, yes. Traffic is the pits. We decided to get out of the house yesterday and headed to B&N at Firewheel, a "new urban" development just east of here. It's a very cool place, and I wouldn't mind going back after the holidays, but yesterday it was completely packed. B&N itself wasn't bad. It was busy, but all the checkouts were open and the line was short. I hope to wrap up my shopping today or tomorrow. I'm nearly there, but this last week has not been fun. Will blog about it later.

The mall is scary - try adding Home Depot to your list of decent places. I was at the El Con Depot during prime Saturday shopping time this weekend and breezed in and out like any regular day.

Excellent! We actually need stuff from Home Depot. Now if I can just figure out how to turn renovation supplies into Christmas presents, we'll be golden. Thanks!