Weekend Assignment #300: Best of the Memes

Way back in April, 2004 (I think it was April 15th, but it's hard to tell from the surviving evidence), John Scalzi posted the very first Weekend Assignment writing prompt on his AOL Journal By the Way. Nearly six years later, it's time to post the 300th Weekend Assignment, with particular attention to the memes we've been using ever since to fill up our blogs:

Weekend Assignment #300: In 2004, John Scalzi proposed the first Weekend Assignment, designed "to give AOL Journalers something to post over the weekend." Over the years the blogging community has had a huge proliferation of blogging "memes" - questions to answer, themed photo challenges, lists, writing prompts and quizzes of all sorts. What internet memes, if any, do you participate in these days?


Extra Credit: Is there a particular category of memes you particularly enjoy, as a blogger or as a reader? 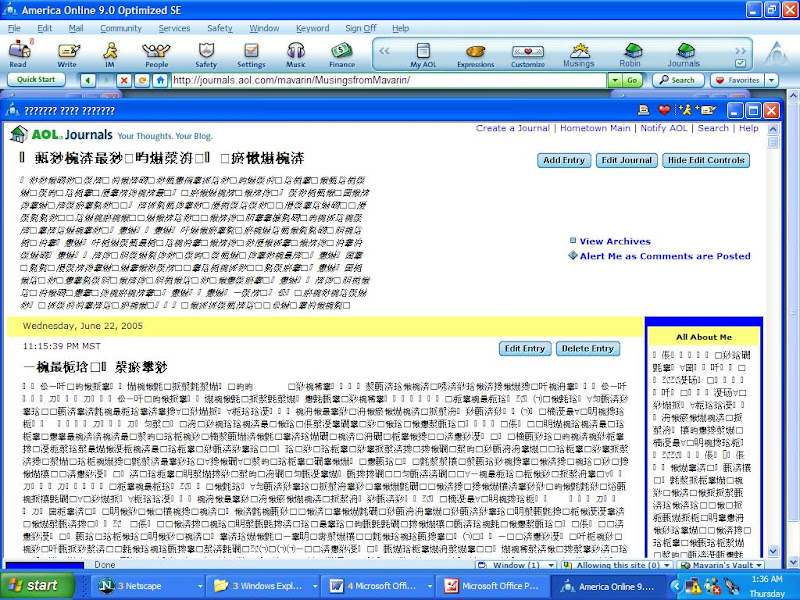 The shot above happens to be my only known screen capture of John Scalzi's old blog By the Way, taken one night during a temporary AOL glitch. (Ya think?) When Scalzi started the Weekend Assignment in April, 2004, the AOL blogging platform, AOL Journals, was officially less than a year old. Blogging was a new concept for most of its participants. To help them find things to do with their new electronic soapboxes, Scalzi started posting a Weekend Assignment every Thursday night, and a roundup of participants' results the following Monday or Tuesday.

I learned about By the Way and the Weekend Assignment about six weeks in, posting my first response on May 31st. The first WA I did asked for vacation recommendations for places you've never been. My entry, Temporal Mystery Tour, was for trips that could only be made by traveling in time.

I'm not quite sure whether I participated in every single Weekend Assignment from then on, but I certainly haven't missed any since that spring and summer. The weekend Scalzi won the Campbell Award, he understandably had other things on his mind, and forgot to post a Weekend Assignment. I pinch hit with one of my own, which he graciously picked up in By the Way a day or so later. When AOL Journals shut down at the end of 2007, Scalzi stopped posting Weekend Assignments (except for once) and gave me permission to continue the meme myself. Two years later, here we still are, although I post later in the weekend now. The Weekend Assignment no longer has the dozens of participants (occasionally more) that Scalzi used to garner, but I very much appreciate those of you who do play along, and everyone who turns up to read the entries.

Over the years I've only had a few other memes I participated in regularly. Scalzi's second weekly meme, the Monday Photo Shoot, was one of the first themed photo challenges. I was there from the first week in 2005, and have never missed one, although occasionally I've squeaked in at the last minute. That's another one I took over from Scalzi, only to pass it on to Carly, who does a much better job with it than I did. Her Ellipsis Monday Photo Shoot is still posted each Sunday night. The third meme I always, always do is, of course, the Round Robin Photo Challenges, which Carly and I started together in 2005.

Beyond that, I've mostly avoided taking on my memes, largely because I didn't want to feel obligated to put in the time and effort for them, in addition to the three mentioned above. For a while I was answering a Writer's Weekly Question, but I didn't do it every time and the meme eventually folded. I was even more spotty in participating in Feline and Furball Friday, balancing other people's cat photos with my canine ones. I like both the photo shoots and the writing prompts, as long as they offer scope for me to write something with a little depth on a particular subject. I tend to approach both writing and photo memes the same was, with both words and pictures, albeit with more emphasis on photos for the photo memes. I have zero interest in memes that call for a series of one word or one sentence answers.

How about you? Do you play along with some of the photoblogging memes, generate lists of random facts when prompted, or ponder literary writing prompts? Do you do as much meme-blogging as ever, or not so much, or more and more? Please tell us about it in your blog, or in the comments thread below.

While you're thinking about that, let's have a last look at last week's assignment. For Weekend Assignment #299: Time's Up!, I asked whether there was anything you wanted to get done before the "aughties" were over. Because of the holidays, only Julie managed to post a response this time out. Click on her name below to read the full response:


Long ago I learned to resolve not to make any resolutions. Long-term plans, yes. Even those fail, but long-term plans and goals are - for me - more achievable than those spur of the moment "it's a new year and I must do something!" plans.


1. Please post your entry no later than Friday, January 8th at 6 PM. (You can also post your response in the comments thread, but a blog entry is better. )
2. Please mention the Weekend Assignment in your blog post, and include a link back to this entry.
3. Please come back here after you've posted, and leave a link to your entry in the comments below.
4. Visiting other participants' entries is strongly encouraged!
5. I'm always looking for topic ideas. Please email me at mavarin2 on gmail.com if there's a Weekend Assignment theme you'd like to see. If I use your idea, you will be credited as that week's "guest professor."

I hope to hear from you soon. Happy New Year!

Kind of a short answer this week, sorry: http://www.barrettmanor.com/julie/archive.aspx?ID=2733

I missed the assignment post and won't get a full response up in time - sorry about that! So here's a short version:

I drift in and out of most memes. The Weekend Assignment is probably my most regular one, but I consider it more of a writing prompt than a meme per se.

I've become just an occasional participant in most other recurring memes. I've done Ten on Tuesday, Booking Through Thursday, and Friday Fill-ins with some regularity, and join in some others - mostly geared to book bloggers - when the mood strikes me. I've been shifting more toward creating my own recurring features.