Remember how halfway through August 2007 I suddenly didn't have a job anymore? That was when my employer, First Magnus Financial Corp, folded essentially overnight in the mortgage crisis. I had a vague idea that cash flow was tightening up, but it was still a shock that morning when, on my way to work, I saw a front page newspaper headline outside McDonald's: "FIRST MAGNUS HALTS LOANS." The payroll for my last 15 days on the job got frozen up in bankruptcy court, although I and other local employees got a "gift" check to tide us over. In 2008 I got a partial payment of something like $67 for those two weeks of work. Meanwhile, the millionaires who founded FMFC were back in business under another name. Just sayin'. Disgruntled ex-employees sued, because apparently it's a federal law that you can't shut down overnight with no warning. You have to give your employees as much notice as possible. The lawsuit dragged on for years, and I did not opt out of the class action.


Fast forward to Christmas week, 2009. One of the volunteers who help out at the St. Michael's church office told me he'd read in the paper that settlement checks would be sent out to First Magnus employees by the end of the week. I alerted John to watch the mail, but nothing came in - until today. (This past day, I mean. It's well after midnight, and may be quite late by the time I fight through the lousy cable internet connection and get this posted.) 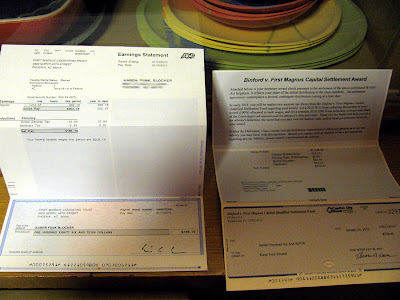 John brought in two pieces of long-awaited mail this evening. One was a paycheck for $186.72, more than tripling what I've been paid to date for those two weeks of work in 2007. The other was for $706.43 after taxes, in settlement of the lawsuit. It's not quite as much as I'd hoped, but it will do! 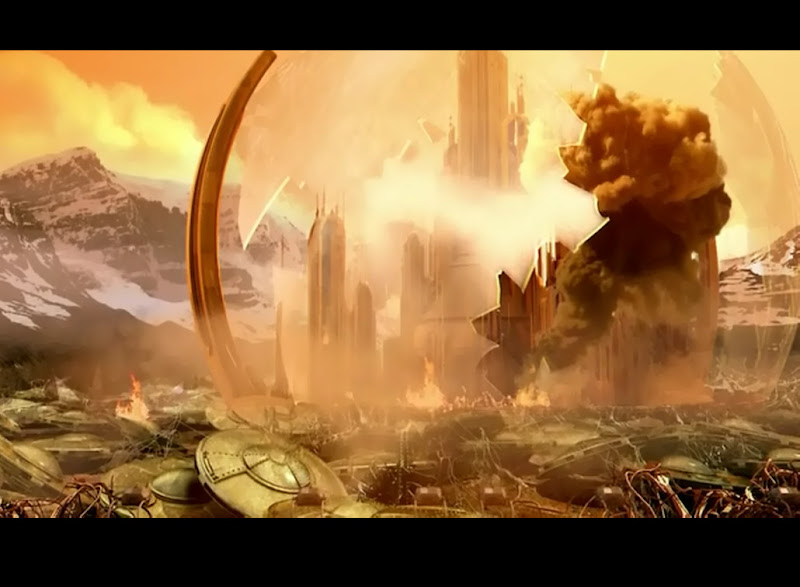 No, I'm not going to that Gallifrey!

A week or two ago as we were waiting for the settlement check, John reluctantly agreed that if it came in and was for a decent amount of money (that is, more than $500 or so), I could use part of it to go to the Gallifrey One Doctor Who convention in Los Angeles in February. It did and it was, so I am. John may or may not come along, just to share the hotel room and hack around L.A.. There was a time when he loved to drive out there every couple of months to shop in Japanese bookstores or watch minor league baseball games. He's been working a lot of overtime recently, and hasn't been out of town in a years. He needs and deserves the break more than I do.

But I have been working hard, almost full time the last week or two, keeping odd hours as I struggled to enter 2009 figures from one program into another, reconcile the resulting balances and prepare financial statements for this weekend's annual parish meeting. I won't go into the details here, but it's been challenging and time-consuming work, and a bit of a learning curve coming to grips with fund accounting for non-profits. There were several occasions that I took spreadsheets home on my flash drive and worked on them well past midnight. But it's been worth it. The financials are printed for Sunday, and the new church treasurer is an internal auditor by profession and a great guy. I only met him by phone and email today, but I can tell already that I'm going to learn a lot from him.

Thursday night was weird, though. I was finishing up in my office at church around 7:30 PM, with the door locked and apparently nobody around. Then I heard bagpipe music. This continued intermittently for some time. I had to stop myself from rushing out to investigate. 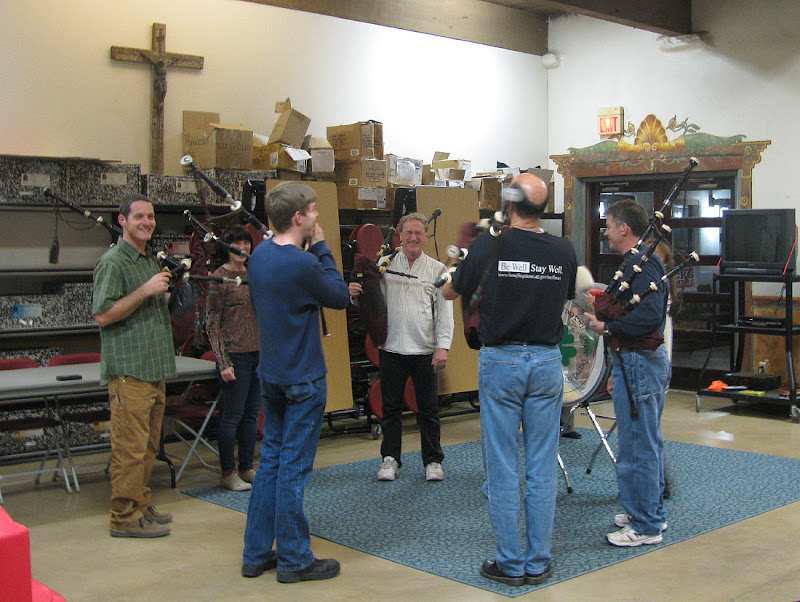 But when I finished work I set the alarm, locked up and followed my ears to the former Parish Center, where about seven or eight bagpipers were practicing together. The one who did most of the talking when I poked my head in was Neal, one of the United Whovians of Tucson from the 1990s. It was great to see him, even though I was only 99% sure it was him! One of these years I need to talk to him about John's desire to have bagpipe music (but not Amazing Grace) played at his funeral. John and I joke about outliving each other, but we are old enough now that we really should have a will or two, and start thinking about what arrangements will need to be made in the fullness of time.

Anyway, I went home after that, and for once I did not work on accounting stuff at home. Then just before 2 AM, my cell phone rang! Alicia called to ask whether I had just left the church. Plausible enough, but no. It turned out the alarm had gone off. Alicia decided to drive over there, at two in the morning in the pouring winter monsoon rain, and see what was going on.

When she got there the police were directing traffic at 5th at Wilmot in front of the church. There had been a power failure, and the traffic light was out. That also explained the alarm. Nevertheless, the police checked out the church property thoroughly to make sure there were no intruders. Nope! And that's a good thing. Evening bagpipers are welcome. Late night burglars, not so much.

I make it a policy to always follow bagpipe music! LOL! That's great news, timing is everything, right? Good things come to those who wait! :)

Does your husband read Japanese?

Congrats on the checks. Have a good time at Gallifrey. Wish I could go, but I have to be hitting the regional con circuit this year.

Alan - John made himself some Kanji flashcards about a decade ago, but no, he never got very far with it. He was buying manga for the graphics and the neat extras they sometimes came with and, I suspect, the sheer novelty of them from a western point of view. Now, of course, a lot of Japanese comic art is translated and repackaged and for sale at Barnes and Noble. But back then, hardly anyone in the States had heard of Ranma 1/2 (the only anime I like, pretty much) or My Friend Totoro.

Julie - and here I was about to try to twist your arm to go to Galley with me! If you change your mind, we can share the hotel room. And Paul Cornell will be there!

Great news, Karen, but did you really mean to post a pic of such personal information? That's not usually a good idea. Actually, I can't ever think of when it would be a good idea.

Sorry, Karen, but that sure looks like an address under your name on the right, under the Earnings Statement. If I'm mistaken, then mea culpa.

I'd looked for my own address on those checks but missed seeing them. I've smudged them out now, although my address isn't terribly hard to get. Thanks, Shelly! It's back to Calle Mumble for me! ;)