EMPS: My House, Other Houses

For the Ellipsis Monday Photo Shoot #74: Houses Of Worship, I was struck by the inclusiveness of the topic. I decided not to go with my default response of just showing you my church, St. Michael and All Angels. But I did start there! 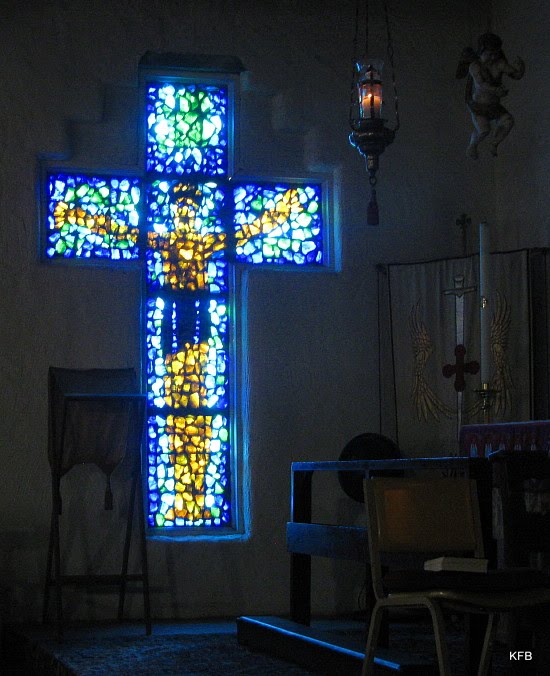 This is the only stained glass window at St. Michael's. I used my standing tripod for the first time that day, setting it up at several places in the church as a stranger offered helpful advice. I tried a bunch of camera settings, but my favorite was the one that shed a little light on the darkened church.

I took a bunch more pictures of St. Michael's on Wednesday afternoon, but I'll show you some of them another time. As the webmaster and unofficial church photographer, I'm always taking pictures of the place, inside and out. It's actually rather tricky to photograph well, sprawling complex and dark interior that it is. All in all I thought it would be better, this time around, to show you some of the other houses of worship in Tucson that have made an impression on me for one reason or another. 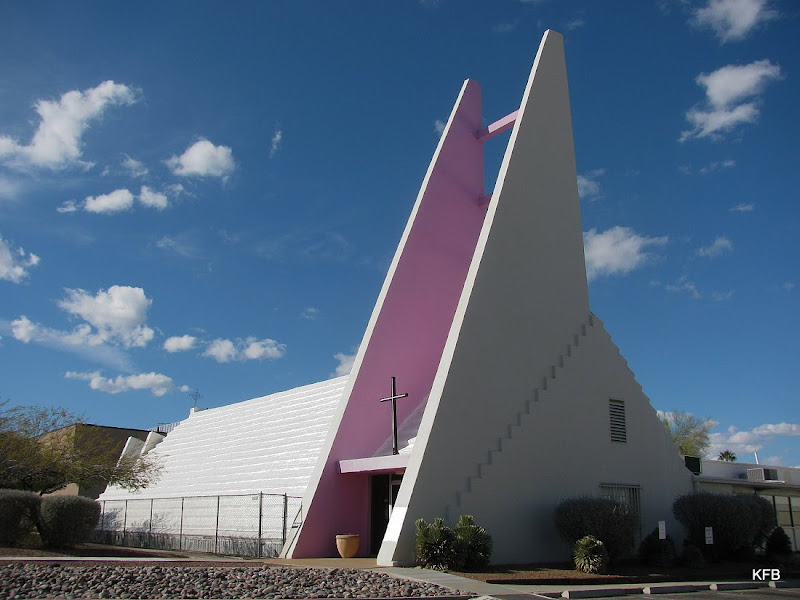 This is Faith Lutheran Church on 5th Street near Alvernon Way, one of the first places I thought of photographing for this, if I could just remember where it was. I love the very modern look of the place, hot pink steeple and all. I understand they have significant problems with upkeep on it, though. Don't we all! I have a book about architecture in Tucson, and this is one of the first buildings I looked up when I bought that. 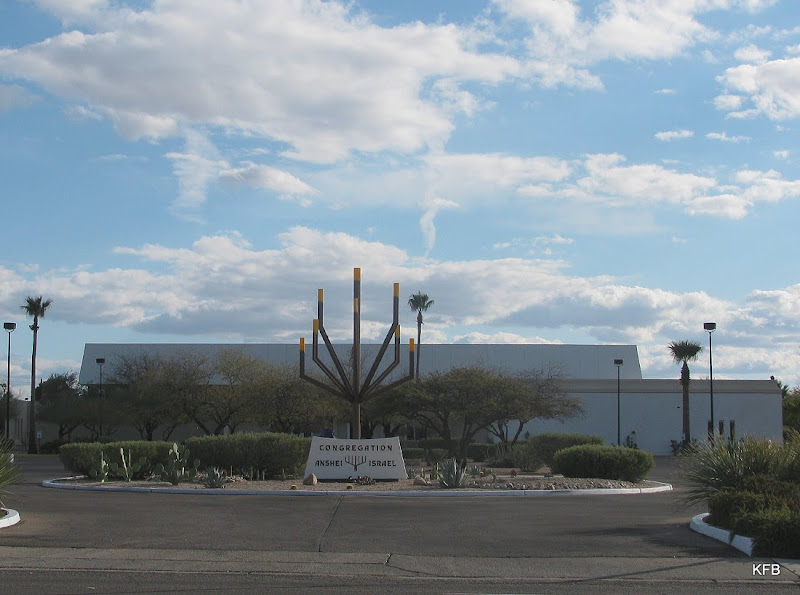 Up the street from the tres moderne church is the synagogue at 5th and Craycroft, Congregation Anshei Israel. It's modern, but not at all interesting from the outside except for the stylized menorah. My memory from a visit there circa 1993 is that it's rather nice inside. What was I doing there in the early 1990s? I went to hear Dr. Ruth Westheimer speak about the Holocaust and promote her autobiography. At the time she had just been a guest star on Quantum Leap. 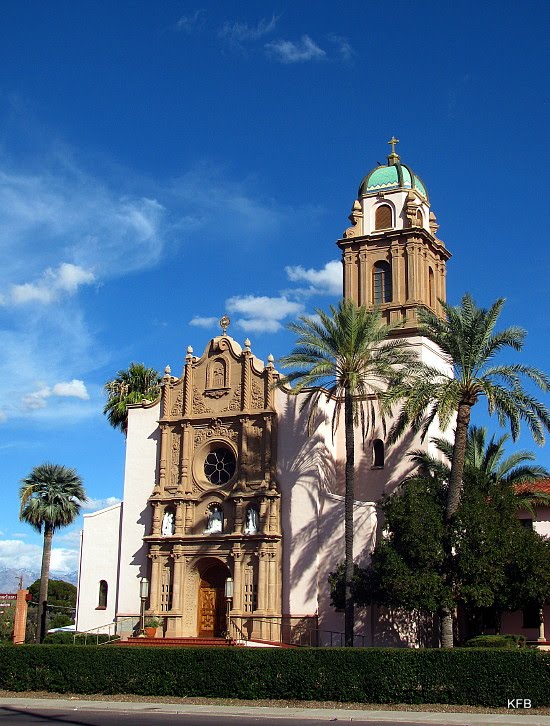 Here is the Benedictine Sanctuary of Perpetual Adoration on Country Club Road. What you're seeing is only one part of a rather large building. Love it! I parked in front of somebody's house across the street to try to take photos. When the homeowner saw what I was doing, he smiled and said, "Beautiful, isn't it?" 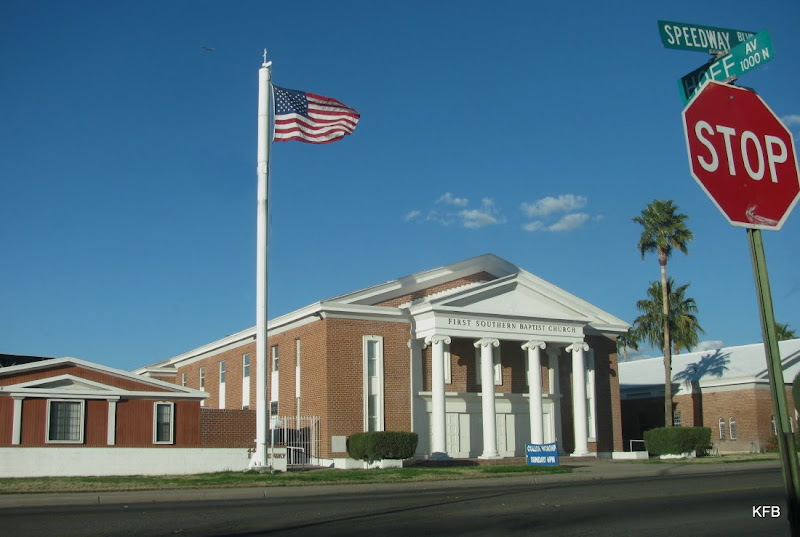 This is the eastern end of the First Southern Baptist Church on Speedway, one of a pair of twin neoclassical buildings with a long, low building and elevated walkway in between. They had a major fire over a decade ago, but you'd never know it now. 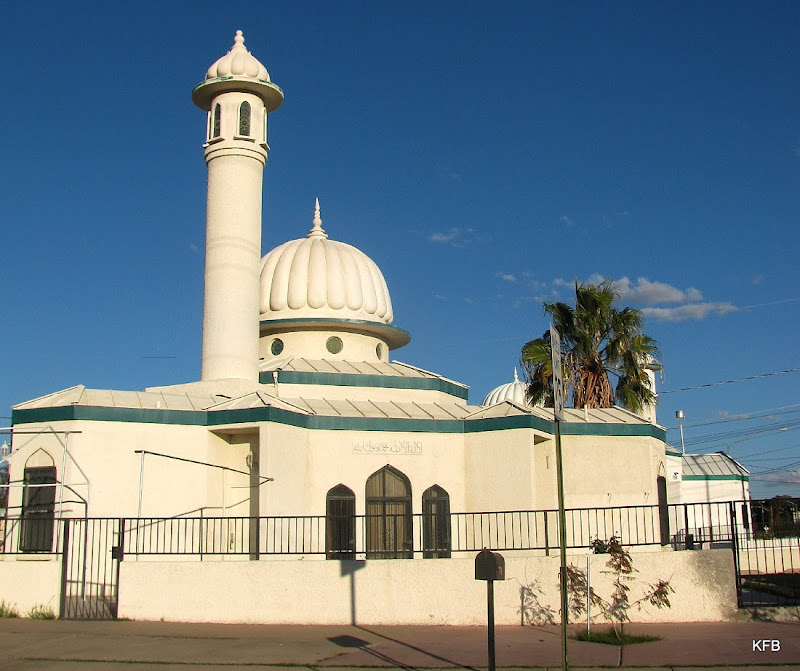 And finally, here is the mosque I spent most of the afternoon tracking down. I misremembered it being on Grant Road, when it was actually on West Speedway. I drove all the way down to the freeway on Grant Road after church this afternoon, turned around, photographed the sanctuary and went home. As I was driving, a friend called on my cell, and I asked if she knew where the mosque was. She suggested I check the phone book. I pointed out I was in the car, and didn't have a phone book with me. She said to go to some business and use their phone book. "That's cheating!" I said. She thought that was pretty lame of me. She probably had a point.

Anyway, I went home and eventually did check the phone book, and Google maps. It turned out that there was a mosque behind Speedway just off Rosemont, between Congregation Anshei Israel and Faith Lutheran Church. I gave in to the dogs and brought them along as I went back out, house (of worship) hunting!

But the mosque near Rosemont was the most anonymous building imaginable. I drove up and down and back and forth, and for a long time found nothing I thought even could be it. Eventually I took a photo of a run down little building that could be an office building, or could be apartments. It was the mosque, but I didn't know that for sure until I looked up the address at home again, hours later. Perhaps they are deliberately keeping a low profile.

Still, that left the one on West Speedway, Mosque Yousuf, also called the Ahmeddiya Movement in Islam. I had high hopes that would turn out to be the pretty, white Moorish building I remembered on the west side of town. And it was! Well, maybe. there may have been another one at one time. On Grant. But I wouldn't swear to it at this point.

Anyway, this one has two buildings side by side, one for men and one for women, I'm guessing. I walked all the way around the complex, not trespassing but taking lots of pictures.

Then the dogs and I headed over to Silverbell Road at the bottom of the Tucson Mountains on the west side. I was looking for the beautiful dog park with the lake view, but it hid from me. So I took the dogs up Sentinel Peak instead, where we wandered the steep, twisty road and watched someone else's photo shoot at sunset. But that's a story for another time.

Lovely. You did a super job with this one, I appreciate all you put into it. Great range of styles. I never get tired of seeing the possibilities! :) VERY NICELY DONE! And yes... with a whole minute to spare! LOL.

Wow, you did a great job of photographing the various houses of worship. I think the stained glass is gorgeous! They're all neat, though.

A nice collection of shots, Karen, especially the first two. Is it just me or does the First Southern Baptist Church look more like a bank or a municipal building than a house of worship?

The fourth photograph of the Benedictine Sanctuary is a masterpiece of light and shadow.
The sky is alive and the dance of the clouds that cross it seem to be echoed in the shadows of the palm trees on the Sanctuary walls.
The architecture is held perfectly in relief by the correct angle of the camera...
Yes!It is beautiful!

There are a lot of cool places out your way. I think I like the church with the hot pink the best. It's so out there. :)

Mosque are easily recognized for their dome, but there are modern building which doesn't have domes, there's a lot of them here. Men and women cannot pray together in a mosque, that's why they have separate area for praying. Muslims pray 5 times a day, and usually it's done at home , unless one is near the mosque. For Friday afternoon prayer, it's compulsory for the men to congregate in the mosque.
I love that building of Benedictine Sanctuary of Perpetual Adoration , so beautiful and majestic.