Unless you live in Tucson, of course!


I deliberately waited all week for the right opportunity to take photos for the Ellipsis Monday Photo Shoot #73: Winter Landscapes. Partly I was really busy at church, preparing for the parish's annual meeting that takes place later this morning; but also there was the weather to consider, and access to a really nice landscape. I spend most of my days in the city, and although it's fairly suburban it's not ideal for dramatic pictures of nature. Also, it's been raining several evenings this week, including over an inch on Friday night. I was hoping to get photos of the local washes with actual water in them, and explain about winter rains in Tucson. And if I was really lucky, I might be able to get some snow pictures as the temperatures dropped.

But I got a late start out the door today, from sleeping in, from messing around online, and from more last-minute stuff on the financials for the parish meeting. By the time the dogs and I headed out, Alamo Wash was dry. The rain has been spread out over several days, with time to soak in and replenish the parched ground.

Next we headed over to Pantano Wash, also called the Pantano River. As you can see from the photo above, the story was the same there. The river bed was gouged from a flash flood, but held no remaining puddles, much less a river flow. 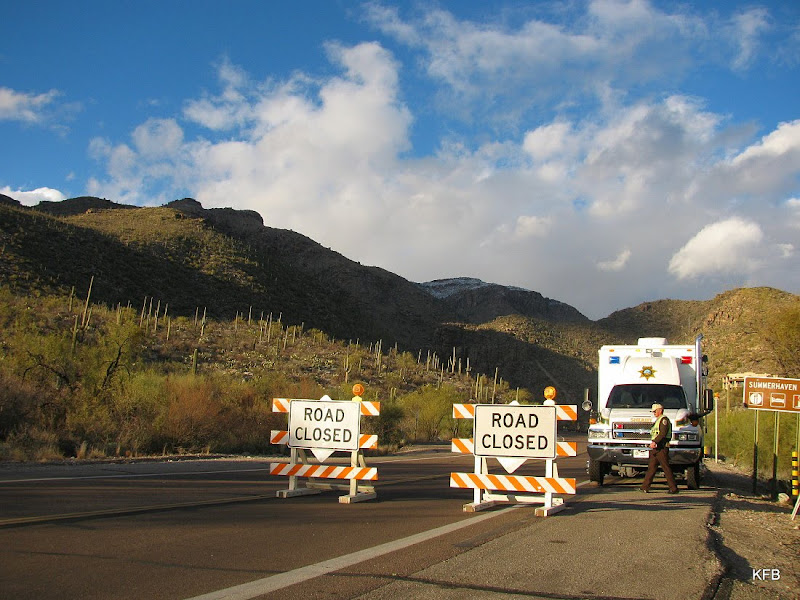 The good news - for photographic purposes, anyway - is that there was a fair amount of snow on the mountains, especially the Santa Catalinas above the 3500 foot elevation. So we headed out to Catalina Highway to take a look. But when we got to the base of the mountain, it was blocked to all traffic. From what I read later online, Friday night's storm hit Mount Lemmon hard, with high winds knocking down power lines and leaving the mountaintop village of Summerhaven in the dark. Not good news for them! 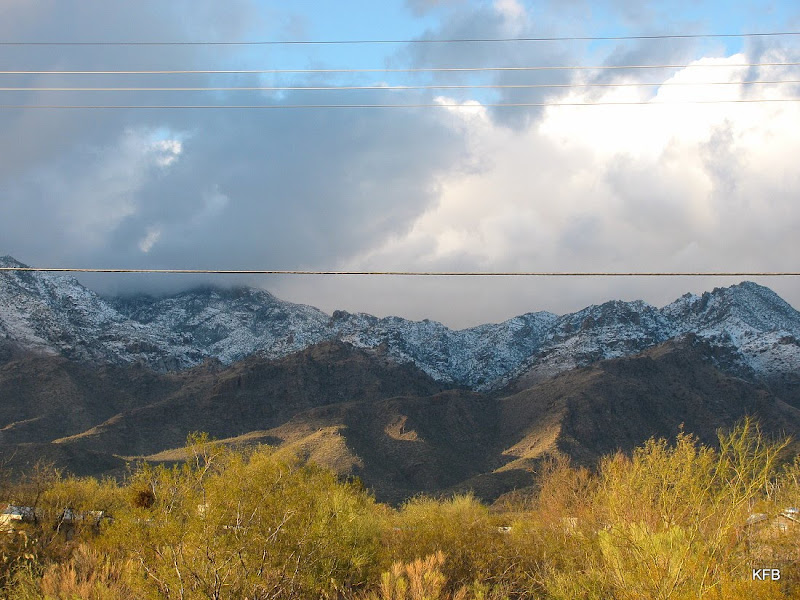 Well, okay, so I couldn't drive even partway up the mountain, where I had hoped to show Cayenne and Pepper some snow. I turned west on Snyder Road, hoping to at least photograph a few snowy mountain vistas. And I did! 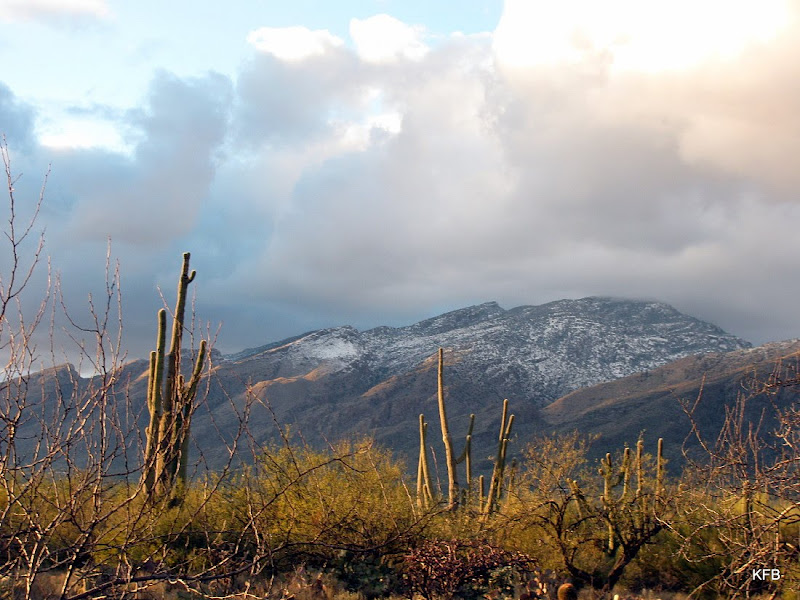 Snyder Road dead-ended into a small neighborhood I've photographed before, years ago. I turned back and headed north on Bear Canyon Road. This dead ended less than a mile later, into a short dirt road at the Bear Canyon trailhead. We're here, puppies! Everybody out! 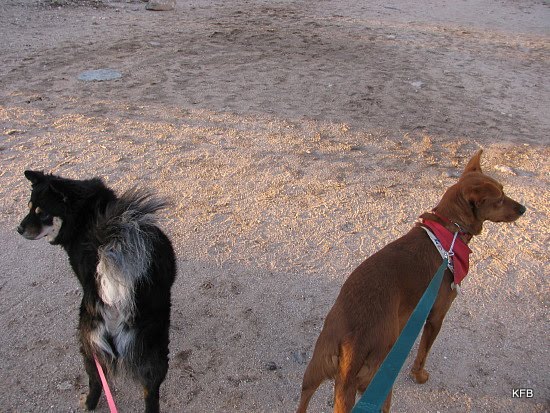 The dogs did not see the bunny or the quail, or even the pit bull in the truck next to us. But they did a lot of sniffing. I expect they smelled dogs, and at least one horse. They probably smelled bunnies, too. 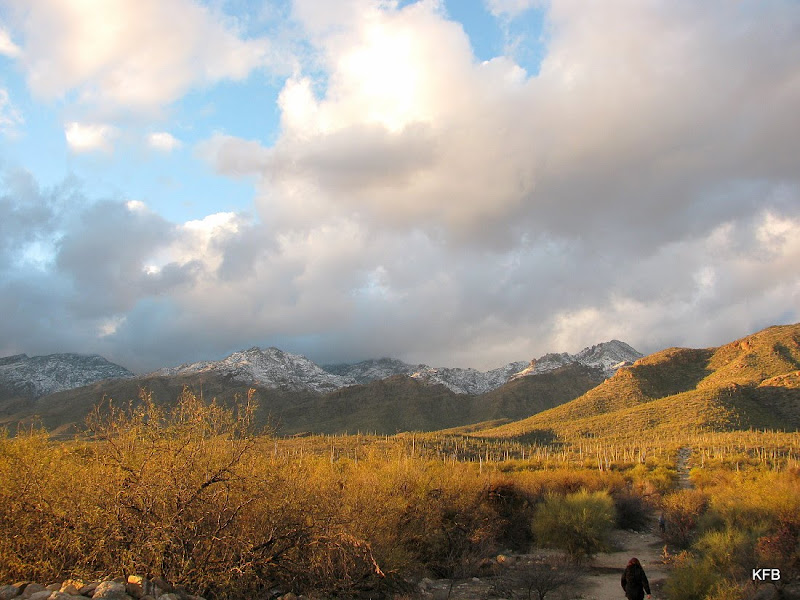 We went a little way up the trail, but I didn't have the time or the proper shoes to go very far. It sure was pretty, though. We met a woman with a timid dog, and a few other hikers. And that, Carly, is Tucson's idea of a winter activity - hiking! 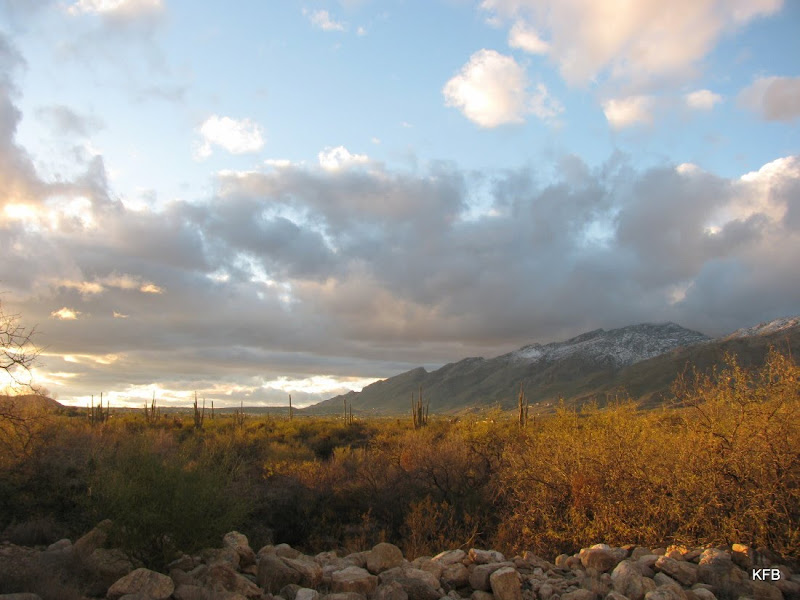 It was late in the day, not quite sunset, when we headed back. 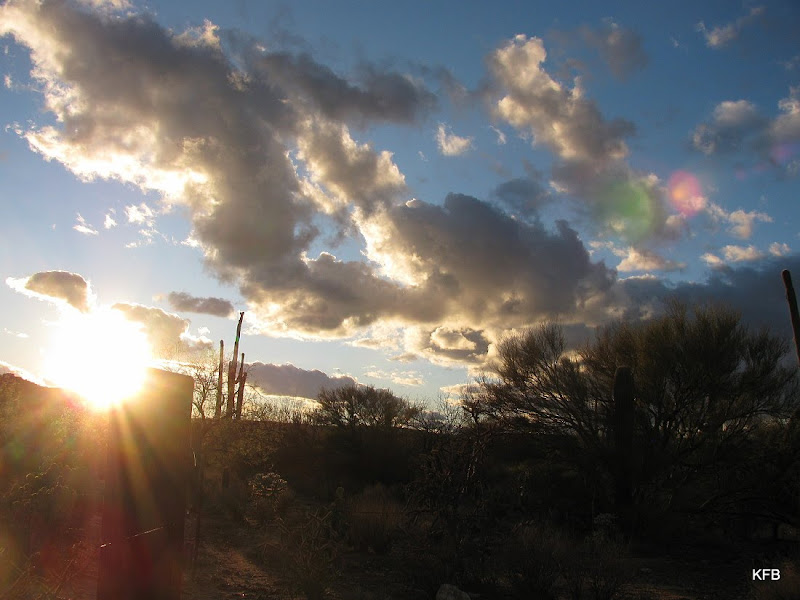 I had work to do in the office, or I would have stayed for sunset.

What can I say... These are just superior! Truly, you are at your best when you are up in the hills, just hanging out with the camera and the pups. Great depth, great lighting, great framing, nothing left to say, well, except that it's the perfect way to show us your world in Arizona!

Beautiful shots of the Tucson area! I especially like the ones with the mountains in them, but they're all good. My program wouldn't show the last picture due to some glitch in my computer but the others made up for that.

That last photograph held me within the lens flare and then I flew across the sky to join with the green and red echoes.

This was a photograph that made me want to know what had the photographer had experienced.