Don't faint, Carly: I'm posting my response to Ellipsis Monday Photo Shoot #72: Pairs. at the beginning of the week instead of at the end of it. Hey, it's not even Monday here yet!

As it happens, I took two photos tonight of my current pair of glasses, for use in the entry below this one. (Go ahead - take a look!) On top of that, an optician at LensCrafters took two photos of me trying on two different pairs of glasses. She did this so that I could see, on the camera viewfinder, how each pair of eyeglass frames looks on me. My uncorrected vision is so poor, you see, that I have to put my face right up a few inches from the mirror to see my face with the no-prescription frames on, which is not ideal. Also, this way I had a picture to take home and show John. He has definite and exacting tastes when it comes to my glasses. His too, I suppose. 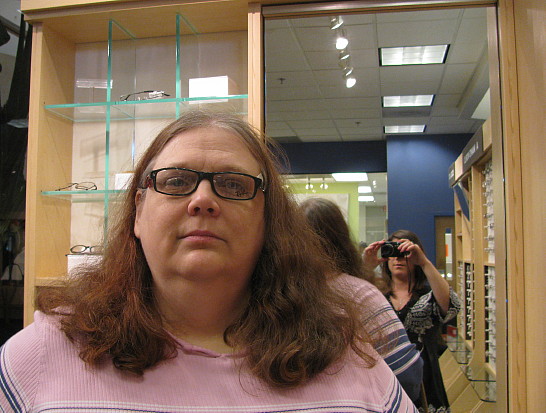 So let's see what fun we can have with these photos. First, here is the shot of me in the pair of frames I didn't buy, taken by the LensCrafters employee but edited by me. This was my attempt at duplicating the Doctor's "brainy specs." It didn't work.

And here are my current glasses: 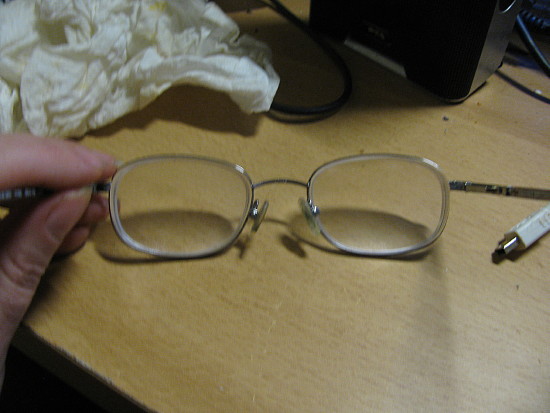 But that's boring, isn't it? Well, then, let's see that rather blurry photo in grayscale, with a charcoal effect added: 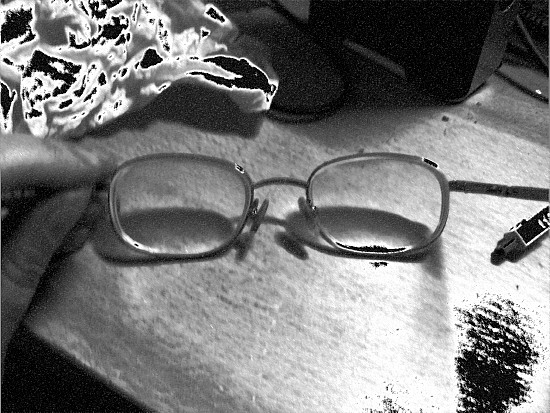 Or we can give it the psychedelic treatment. For this one, I used a neon effect, selectively changed the hue and saturation in spots, and then turned the whole thing negative: 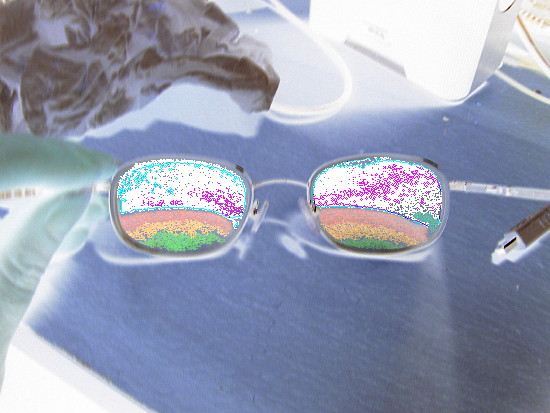 And here's the shot that made me decide to do this entry right away, while I was all enthusiastic and inspired and stuff. You can see the full color original in the entry below this one, but here's the grayscale version. I fussed with the contrast and brightness a little. 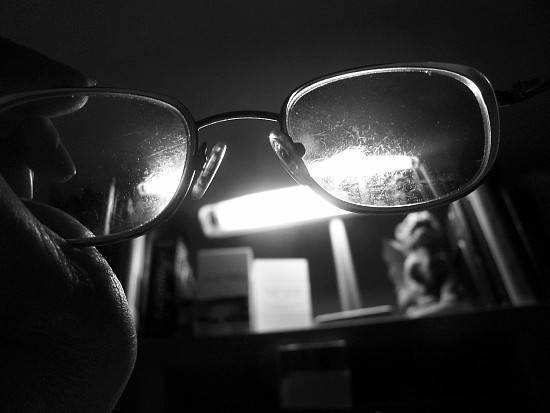 That's it for now. I reserve the right to do this EMPS again though, at the end of the week! Not that I'm promising or anything, but it could happen.

I have always hated having to shop for glasses until I found the perfect online site. Not only do you have lots of choices but the price does not leave sticker shot.

Nice group of photos. I like the different takes on your subject, but for some reason, my eyes didn't even look at the glasses in the last photo, you see, my attention went straight to the gargoyle just above/below the lens on the right side. It is a gargoyle... right? :)

I like your creativity with the glasses! I don't know how to do the psychedelic effects. You are so good at them. Nice entry!

Four eyes must be greater than two if two pairs are greater than one.
I see your division and diversity that answered this challenge with such candour and sent a message far beyond my simple vision.
I see that your current glasses hold the world that you love well enough for me to know that you see more than most ever dream of encountering.