EMPS: My Year in Pictures, Sort Of, Part One

For Ellipsis Monday Photo Shoot #70: Your 2009 Gallery, Carly wants to see a selection of our best photos from 2009. So I'm about to browse my Picasa web albums from last year. Let's see what we find!


Let's start with this one from January, taken on an afternoon tramp through Sabino Canyon. I probably had a number of shots that day that were technically better or had nicer scenery, but this is the one that's most memorable for me. That mountain lion sign amuses me so much that I've made edited versions of this shot for comedic effect. Below is an example I posted on Flickr, featuring the Tenth Doctor from Doctor Who: 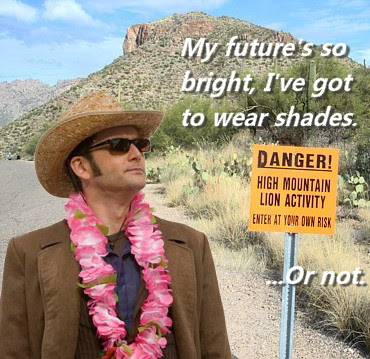 The Tenth Doctor in denial. December 2009.

In February I started posting several series of "Reid Park Ramble," my galleries of photos taken while exploring Gene C Reid Park with my dogs. Here's one of the more unusual shots. The bronze statue is one of a number of figures at the Cancer Survivors Plaza. Intrigued that it looks like a person, Pepper gives its hand a sniff!


In March, I was witness to the single best sunset I've ever seen, at Gates Pass in the Tucson Mountains:


In April, I took the dogs up Mount Lemmon. Here's my favorite of those shots:


My second favorite is this one:


In May, Pepper met a couple of young children in Reid Park:


In June, I found it necessary to photograph some highly unusual clouds:


We're only up to June, so let's continue this on the next entry.

Fabluous shots, especially the sunset... THAT IS YOUR VERY BEST! I don't know how I missed that one, but I am so glad I got to see it now. I always wanted to see you do some away from all the clutter of the downtown area, and my goodness, you really set the bar HIGH on future sunset photos. Later this year, I will be selecting "Sunet Photos" once again as a MPS assignment, and I will have this one in mind! WELL DONE! Love the whimsy quality to some of the other ones, especially the half pic of the statue with Pepper asking to shake hands, well, that's I see her doing. :)

Fascinating photos -- I really like them, especially the ones of the dogs and the sunset. Very nice job!