Round Robin: Broken Exhibits at the MOTW

This week's Round Robin Challenge: Broken was suggested a couple of years back by Julie of  Julie Barrett's Journal. I selected it for this week knowing that Casa Blocher, the Museum of the Weird, is full of neat stuff in not-so-great condition. I hoped to come up with some wonderful romantic image of an iconic object with a piece broken off, like a wagon wheel with a missing spoke or something like that. Considering that we don't actually own any wagon wheels, this was perhaps a bit unrealistic of me. Also, some of the exhibits of things broken are inaccessible to my camera right now, being in various boxes, or buried under other junk in the front room. Still, I did find a few things to show you.


Let's start with one of the oldest exhibits in this category. This mantle clock belonged to John's grandfather, and I think it broke down either shortly before or shortly after we got married. Every time I see it, the song My Grandfather's Clock gets stuck in my head for hours. Fortunately the clock currently resides in the library closet, so I am not plagued with this particular earworm very often! It's one of the more somber objects in our brightly colored collection of vintage decor and pop culture. I like that this shot has a brightly colored reflection on the rather face-like clock face. John bought this old radio on eBay over a decade ago, hoping that it worked or was fixable. It wasn't. Kind of cool looking, though! That's why it's still around. 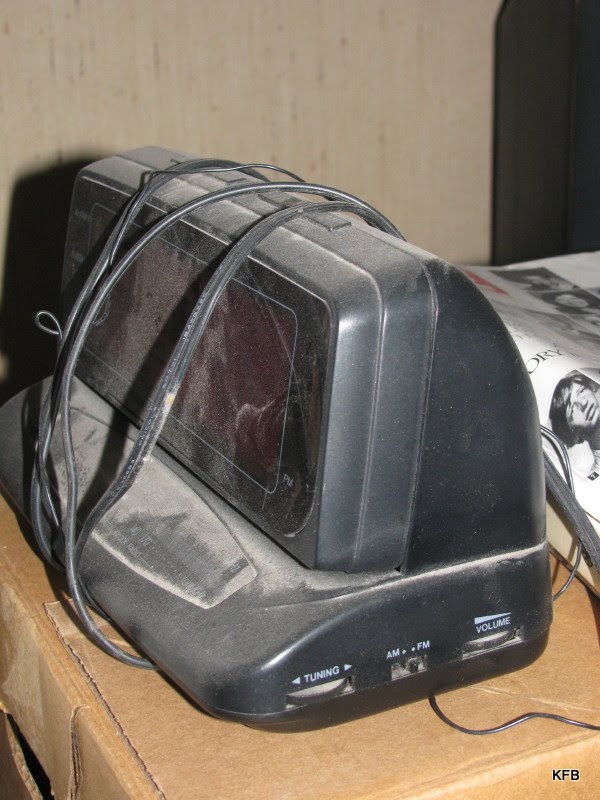 What is it about radios, anyway, especially clock radios? I've only known one clock radio in the past forty years or so that continued to work properly for a decade or longer. Most of them fail to go off after a year or two at best. 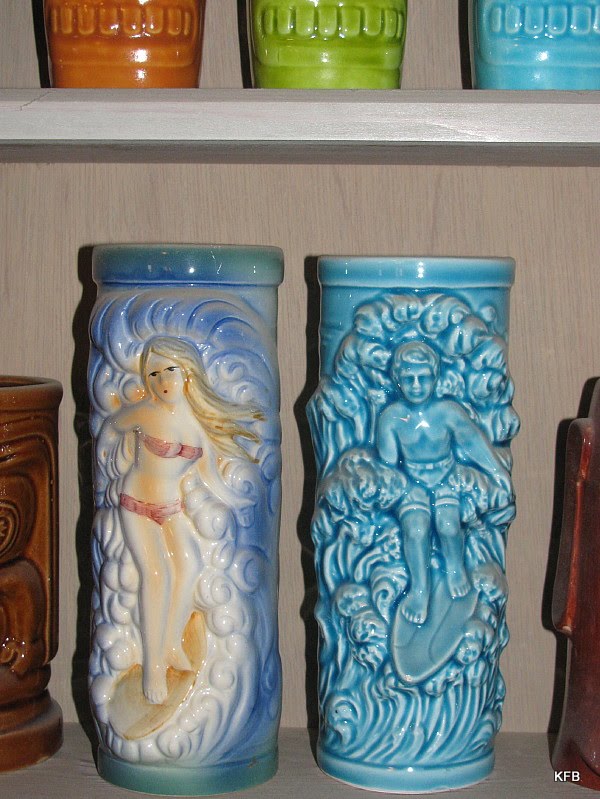 I think we found these Hawaiian-themed mugs at two different yard or estate sales on the same day. The surfer boy is in fine shape, but do I see a crack at the top of the surfer girl's mug? 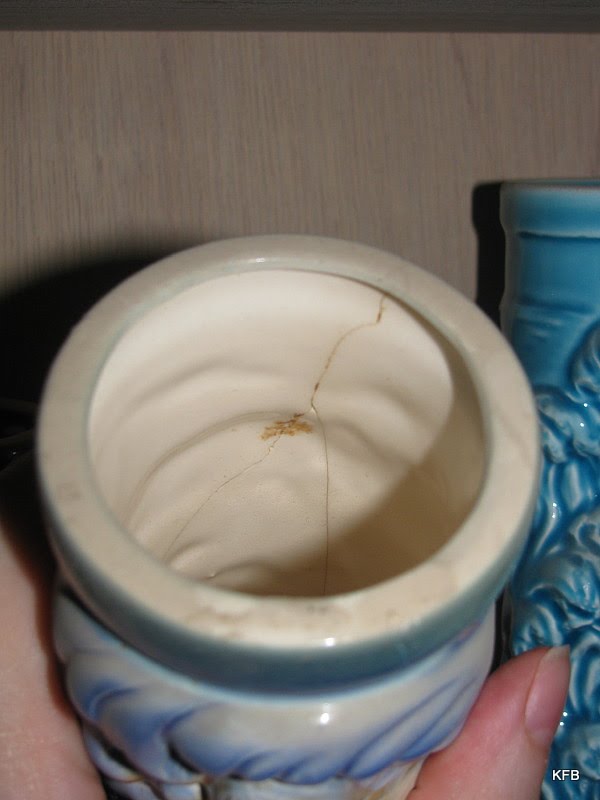 Oh. It's actually much worse than it looks from the front! But we bought it anyway. How could we not? 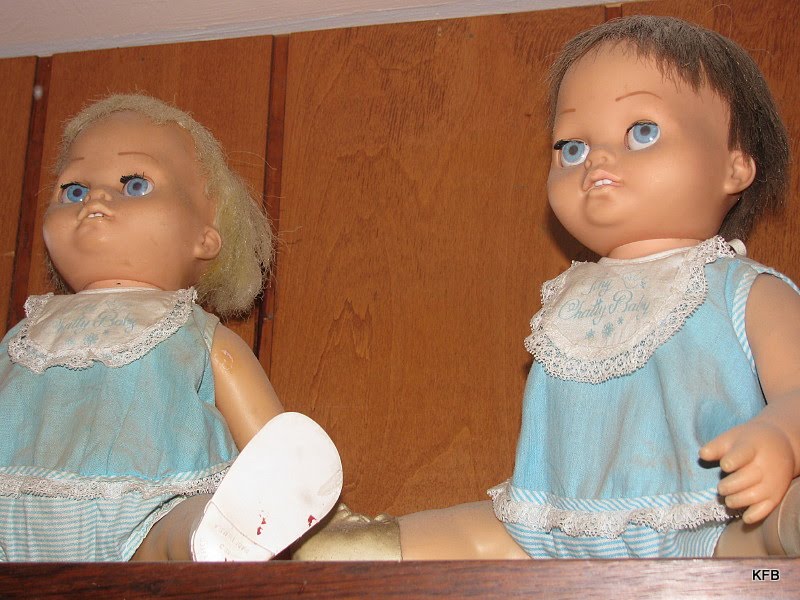 One of these Chatty Baby dolls has a broken voice box. The other one still babbles unintelligibly. Does it really matter which is which? I haven't pulled either string in years. 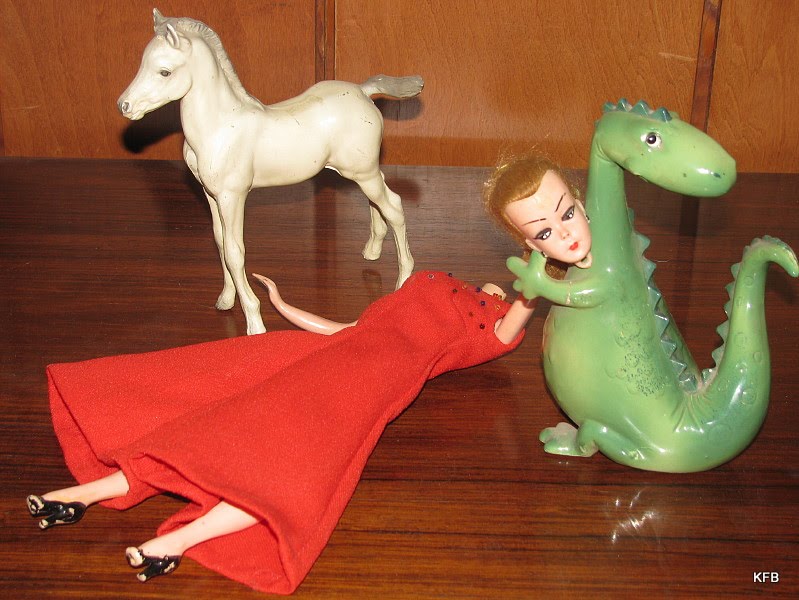 I posted a version of this scene on the Round Robin blog, and now I'll explain it. The Breyer colt has a leg that's bent out of shape. The dragon coin bank, called Dino for obvious reasons, has one arm glued back on. He's trying to be helpful here, holding Hong Kong Lilli's head until I get around to reattaching it.

The real story here is about the Hong Kong Lilli doll. These dolls were Hong Kong knockoffs of Bild Lilli, the precursor to Barbie. Bild Lilli was a sexy cartoon character from the Bild-Zeitung newspaper in Germany. Two sizes of Bild Lilli dolls were made in Germany in the late 1950s, one of which inspired the inventor of Barbie, Ruth Handler, to design an American counterpart.

As with most pre-1960 Barbie-related dolls, Bild Lilli is rare and expensive; but the Hong Kong versions are more affordable. Both the German dolls and some of the Hong Kong ones were held together with elastic bands inside the hollow body, and the shoes were molded on. In the 1990s when I built my small collection of vintage Barbies, I had little hope of getting any kind of Lilli, let alone a pre-1960 Barbie. So when I saw a doll leg (including the painted on shoe) sitting by itself on a table at a garage sale one day, I got very excited. I asked whether they had the rest of the doll. The guy selling it wasn't sure. It simply amused him to display the leg by itself, much as the Old Man in A Christmas Story loved his Major Award. I told him that if he could find the rest of the doll I would buy it. Five minutes later, I was walking back to the car with my first Hong Kong Lilli! At home I strung her back together with rubber bands, which is kind of a tricky task. That worked for a while, but rubber bands don't last more than a few years in the Tucson heat. So Lilli's lost her head again.

That's more than enough broken items from our Museum collection for one post! Now let's see what other wonderful but broken objects the other Robins found!

Sandy - Posted!
From the Heart of Texas
http://sandyfromtheheartoftexas.com

Email ThisBlogThis!Share to TwitterShare to FacebookShare to Pinterest
Labels: Broken, Dolls, Museum of the Weird, Round Robin Photo

The MOTW never lets us down! There is always something to see and marvel at! The Barbie Lillie looks so much like Debbie Mazar! Too cute! I hope she finds her body soon.

Love the variety of broken things you showcased. I forgot to post that I was going to participate and now the comments are closed. :-( Thanks for visiting my site, though!!

I thought this challenge is hard to find but as I look around my fellow bloggers they have pretty good looking broken things to show and I enjoyed it. Your hawaiian mug is cool. Like it! Happy Sunday!

Wow, lots of broken things !
Very very interesting what you wrote about Barbie ! I know the Bild Zeitung very well but I didn't know about Bild Lilli, maybe because it was just after my "doll" time. I was a teen in the 50th, and more interested in living "male dolls", lol !

You sure have lots of treasures that reminded me of my childhood, Karen!

I can't believe I missed this when I was checking out everyone's work at the weekend.

I love the stories and reasons behind photographs, Thanks for sharing your photographs and explaining why these things are special to you.

That first picture of the old clock has an almost ghostly quality to it. Kinda neat!