EMPS: Not Your Average Flower

I knew Ellipsis Monday Photo Shoot #92: State Flowers was going to be a challenge for me, not just because I really, really don't like flowers but because of what Arizona's state flower is, and where and when it is to be found. Keep in mind that Monday was the last day in May as you read this excerpt from Wikipedia's description of these particular blossoms:


The night blooming flowers appear April through May and the sweet, ruby-colored fruit matures by late June.

One source I looked at did admit that the flowers are "sometimes" open in the mornings as well, but I didn't feel like driving out to see them at dawn. So I checked my photo archives, four years of April and May photography. No luck.

I got up late Monday morning and headed out, half expecting to fail at finding this almost-out-of-season flower at definitely the wrong time of day. It was past noon when I reached the flower's habitat:


Do you see them? 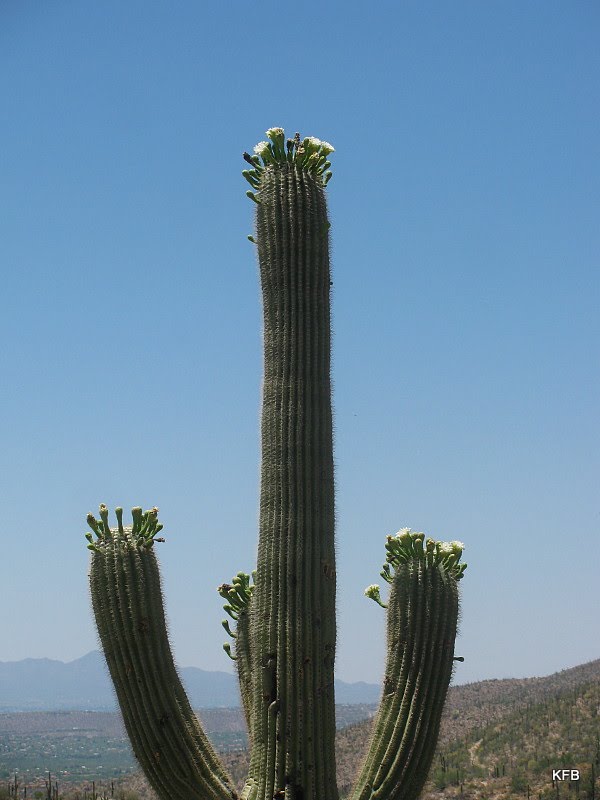 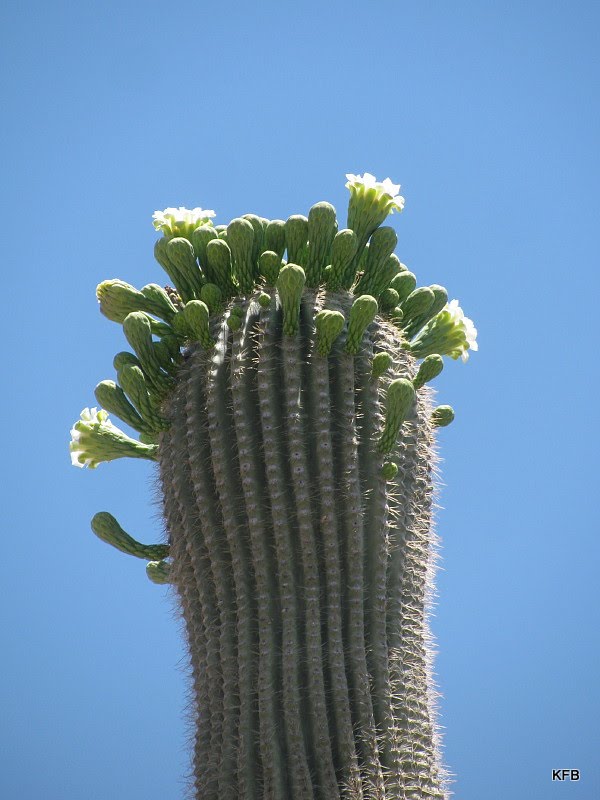 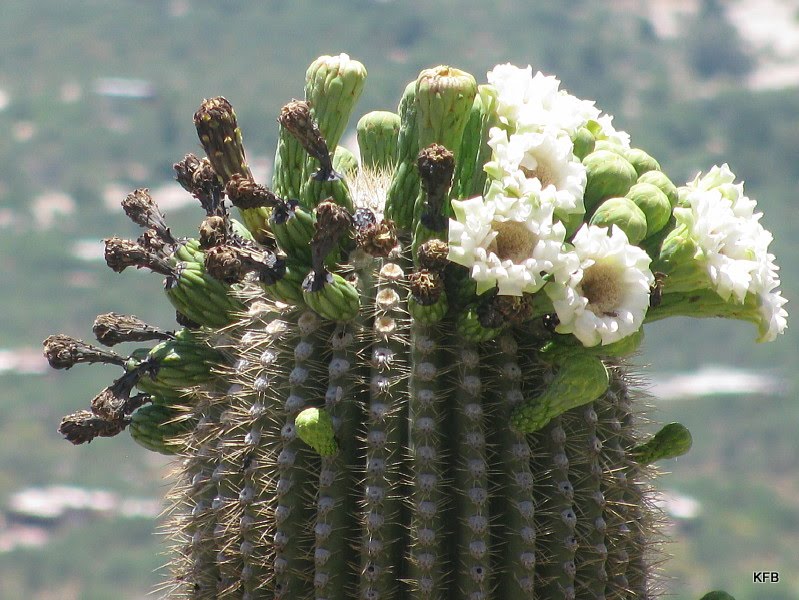 Saguaros grow all over the foothills of the Catalina Mountains, especially near my faithful Babad Do'Ag Vista pullout, about three miles up Mount Lemmon. Nor was I the only person taking pictures of them. 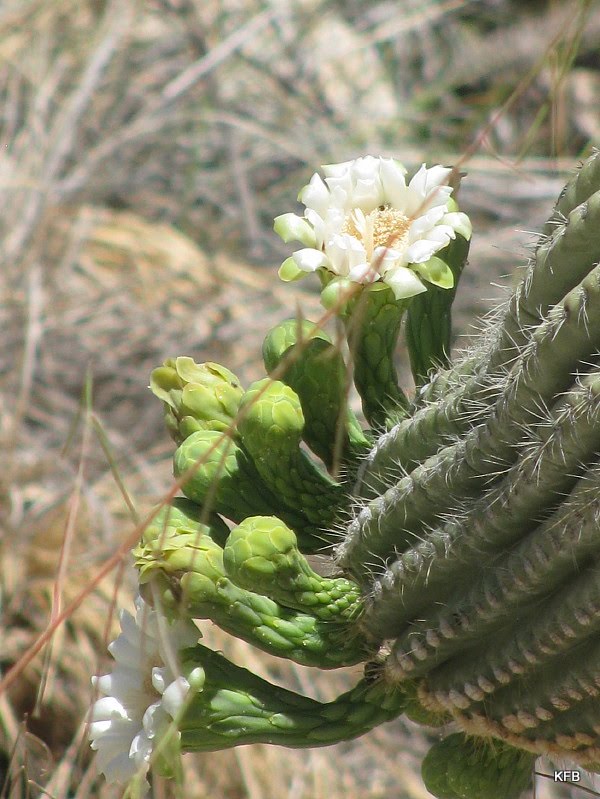 The tricky part, aside from the end-of-season issue and the night-blooming schedule, is getting close to the blossoms, which grow at the tops of the saguaros and at the ends of the arms. At Babad Do'Ag, one can look down the mountainside at some of the giant cacti, but that doesn't bring them in close. Here's one where I got lucky, with blossoms on a low-hanging arm. 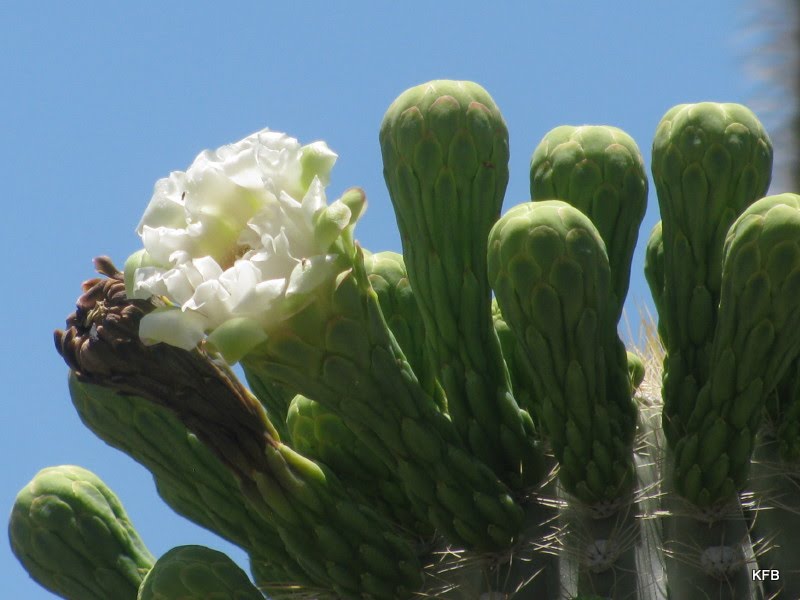 For other shots, I tramped around in the desert a bit, zoomed in the best I could and hoped! 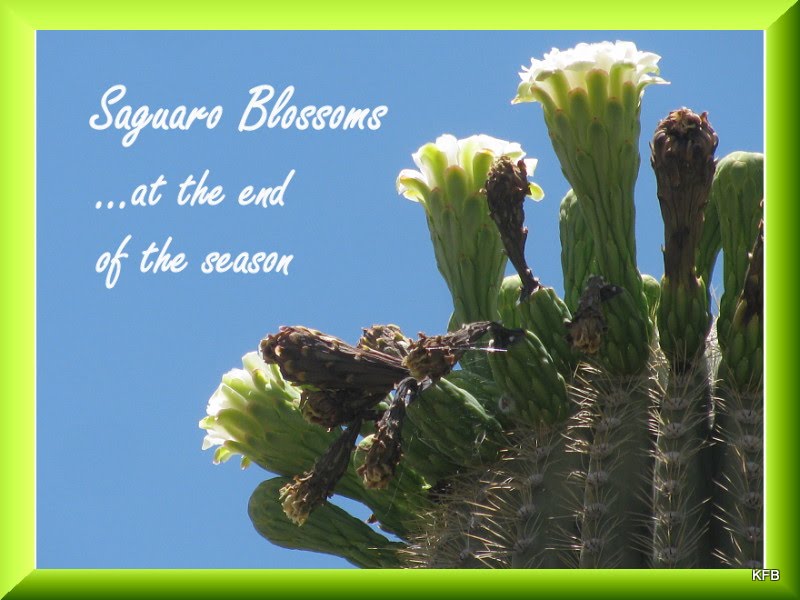 Most of the saguaros had a mixture of open blossoms, closed blossoms and former blossoms, well on their way to becoming fruit. The native Tohono O'odham and Pima tribes traditionally harvest saguaro fruit for jellies and candy, knocking the fruits down with long poles. High end local restaurants sometimes use saguaro in a sauce for one expensive menu item or another.

So anyway, yay, I win! On the last day of the season, I found and photographed this elusive state flower. So there!

I have always loved the Saguaro...the cacti with personality, is what I say. And their flowers are so beautiful. You worked hard to get these shots...thank you so much. Nature certainly didn't cooperate by keeping the beauty at eye level, except from a distance. Nice job!

The flowers are so gorgeous! even though we are hot all year long, we don't have much cactus here which bloom and nothing is as pretty as yours!