Addressing the Issues - In a Jury Pool

You'll never guess what I did today, unless you read last night's entries, of course. Even if you did, you may be interested in the details.

I had federal court jury duty, for a very specific case. It was for the murder trial of a Mexican national. He was accused of murdering someone on the Tohono O'odham reservation in 2003. 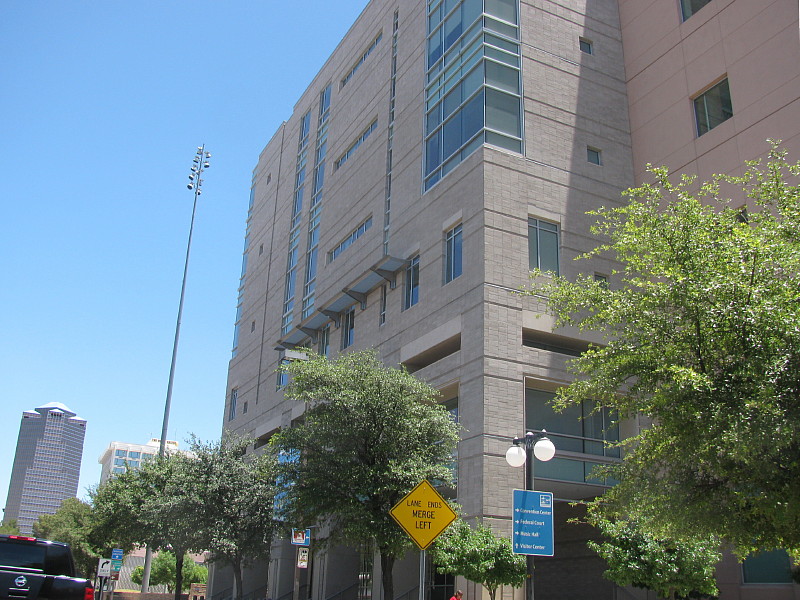 The Federal courthouse - no cameras allowed!
First off, I was a day late and then some. I forgot to call the phone number over the weekend, and so missed my Tuesday reporting time. So I showed up on Wednesday instead. I missed the turn for the parking garage, because it was on the right side of the street and I was looking on the left. By the time I doubled back, parked and walked the city block to the courthouse, I was later still. Then I had to double back to the garage, to ditch my camera, which wasn't allowed in the building. I should have thought of that!

Anyway, I eventually arrived back at the courthouse, out of breath and coughing from the combination of heat, exertion, dehydration and the remains of my cold. It probably took me a good half hour to stop coughing, by which time one of the two other people in the room had moved far away for me. No problem otherwise, though. It was hours before anyone else joined us in the Jury Assembly Room.

Finally we got underway. This mostly consisted of filling out out a 15 page (or something) voire dire questionnaire. And oh, boy, the questions! Have I visited the reservation? (Yes, I photographed Mission San Xavier del Bac, and attended a Tony Bennett concert there in 2002.) Do I know the victim or the accused? (No.) How about anyone in law enforcement? (Yes, a retired judge.) Would I be disturbed at looking at graphic photos of the victim? (Yes - I can't even watch fake gore on House.) Have I ever been the victim of a crime? (Yes.)

Mostly, though, the questionnaire was about the whole immigration issue, through the prism of a specific murder trial. Would my attitude toward Mexicans affect my impartiality? (No.) Do I belong to or support any groups that want to change any laws, and if so what groups? (Does the Democratic Party count? I said I supported that subversive group, the Social Action committee at St. Michael's.) What is my attitude toward illegal immigration? Do I think the immigration laws are too harsh, too lenient or just right? And on and on!

I ended up writing and writing, lots of explanations of "Yes" answers. I wrote about my belief that unnecessary impedments to legal immigration lead to legal immigration. Enforcement of illegal immigration laws, including stupid SB 1070, use up resources better spent going after actual criminals such as drug runners. And so on. I was almost the last person to turn in my questionnaire.

Then we waited for an hour, when they said 20 minutes. Finally the bailiff came in and said, they were short on the jury yesterday, but as of noon today they had enough with one to spare. So we were dismissed. Relief! I probably wouldn't have been selected anyway, but I really, really didn't want to sit there contemplating graphic photos of a real, murdered person. 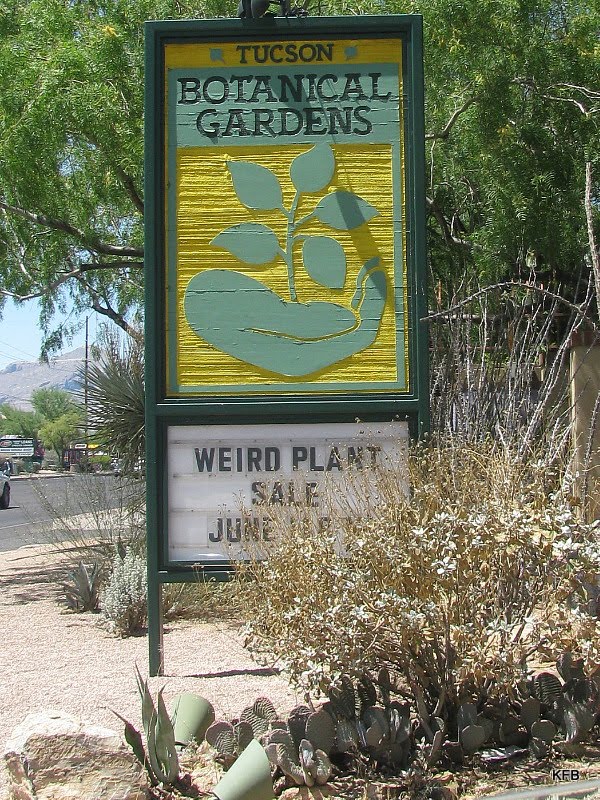 So I left the courthouse, and headed back to the garage with a stop off at the Arizona Geological Survey gift shop, which was on the way. From there I went to Tucson Botanical Gardens, splurged $6 to cover the RR Challenge for this weekend. The temperature was up in the 90s by then, and I ended up dehydrated and a little overheated, with only hot water from a water fountain for refreshment. Great place, though.

After that I met someone at church for lunch, followed up on some documents needed by our outside auditors, and went home. A distraught call from my disabled friend,  a mislaid piece of paper and every possible red light between here and Craycroft meant that I just barely missed out on reaching the local DES office (to file a form) before they closed at five.

So it's been quite a day. Especially on fewer than two hours of sleep!

Can't wait to see your photos for the RR. Our botanic garden has no entrance fee but I don't have to go there for this week's challenge. There;s plenty of gardens here, we're not known as Garden City for nothing! I head out to the nearest garden at a community center.

It's interesting to learn about your jury's system, ours are non- jury, just need a judge to preside and decide.